Cannes 2018: Kristen Stewart's Eye Makeup Is The Stuff Dreams Are Made Of

It's a look that's quite unlike her own 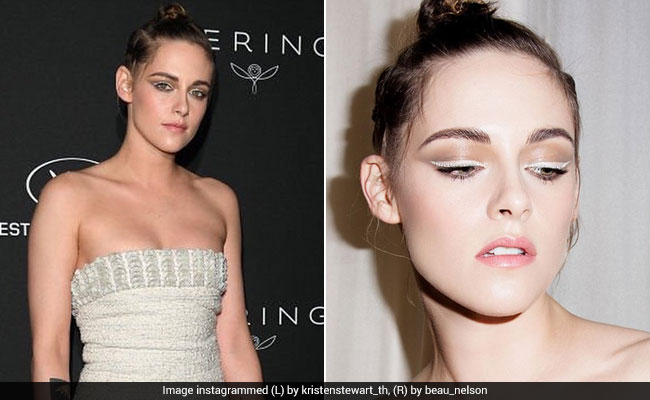 Along with giving a stage to films and fashion, this edition of Cannes has been a wonderful showcase for makeup too. From fiery red lips to tousled updos, the French red carpet has seen one stunning look after the next all through the days. Even at its fag end, that hasn't changed with Kristen Stewart leaving us heart-eyed in the trail of her latest look.

For the Women In Motion dinner held at the Cannes Film Festival, Kristen Stewart made a rare subtly stylish look that surprised many. She attended wearing a strapless Chanel dress with an embellished trim and pointed white pumps. But it was her makeup that really made everyone do a double take.

Created by makeup artist Beau Nelson, her eye makeup look was a clean flick of white winged liner trimmed with pearls and highlighted inner corners. This was paired with a top knot, strobed skin and glossy lips. To create the eye makeup look, a brown shade is blended into the crease to give it depth. Over this, the winged liner is created in white and pearls are added to the outer line. There's also a matching shimmering highlight in the inner corner, which adds to the refreshing look. Natural brows and a coat of mascara finish it off brilliantly.

Kristen Stewart looked nothing short of angelic in the eye makeup look, which is what was so surprising because she's usually known for her bold, dark makeup statements. Even during the past week at Cannes, Kristen was seen flaunting smokey eyes and black winged out shadow, which was true to form. So it came as a pleasant surprise to see her wear a makeup look that's so unlike her own and pull it off completely.

Being bright and fresh, it also the right kind of appeal for a summer night on the town or formal dinner. Give K-Stew's look a try for yourself, if you're willing to patiently apply the pearls, that is.