Janhvi Kapoor To Alia Bhatt: Celebs Are Proving That No Makeup Is The Best Makeup 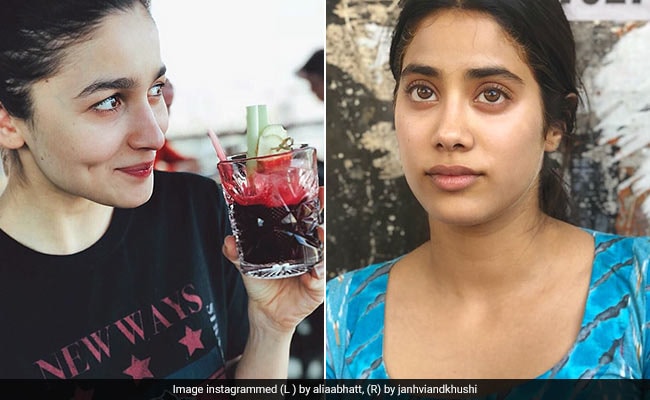 While wearing makeup can sometimes give you an instant boost of confidence, not wearing makeup has far more benefits. We're not saying no makeup is the answer to all your skin and life problems. No sir, sometimes quite the opposite. Anyone who has woken up with a giant zit and dark circles thanks to that late night Netflix binge understands the important of concealer, just fine. But in the long run, wearing no makeup can actually add immensely to your skin care routine. Not only does wearing no makeup result in you saving extra time in the morning, but your skin will also feel lighter and less oily as you spend your time working through the day. You know who knows this little secret all too well? Some of Bollywood's most famous, and some might say most beautiful. Here are some celebrities who are proving that no makeup is actually the best makeup.

Joining Bollywood's no-makeup wagon is one of it's newest members, Janhvi Kapoor. Janhvi has only just kickstarted her career with a Dharma Production's movie, Dhadak. While Janhvi is barely one movie old, her popularity seems to be surging upward and onward thanks to her real style and demeanor. Janhavi's preference for no-makeup definitely seems to be adding to her natural charm.

Alia Bhatt seems to be no stranger to wearing no makeup. The Raazi star has often gone ahead and shared pictures of herself bare faced or wearing minimal makeup. Unsurprisingly, the 25 year old always manages to look fresh, anyway. Alia recently shared a picture of herself with a friend, wearing no makeup. Ironically, the friend in this picture is Alia's makeup artist, Puneet B Saini.

Katrina Kaif definitely believes in giving her skin a break, especially when on holiday. Katrina is often seen wearing no makeup when off duty, and much like Alia Bhatt, the Ek Tha Tiger star also often posts pictures of herself sans makeup. Recently, while on holiday in New York, Katrina posted a picture with film director Nitya Mehra, in which she can be seen wearing no makeup.

There's absolutely no doubt about that fact that Aditi Rao Hydari has absolutely flawless skin. The actor who was last seen in Padmaavat, manages to look stunning not just on screen but also in real life. We're not sure what Aditi does to have skin that beautiful, but we'd really love to know. Yes, we would.

Last, but definitely not the least, is Kareena Kapoor. Bebo, as she is popularly known, is often seen sans makeup. Let's be honest, with skin like hers, she really doesn't need it. Here's a picture of Kareena and Soha Ali Khan along with their babies. Both the mommies seem to be wearing no makeup in this adorable picture shared by Soha on Instagram.

Are you going to opt for wearing little or no makeup starting now? Or is the thought of wearing no makeup just scary? Let us know your thoughts in the comments section below.