While Kareena Kapoor's outfits have been doing all the talking till now, finally she upped her hairstyle ante with a fun braided look

Kareena Kapoor wears a new hairdo to promote her movie

Even before Veere Di Wedding releases today, the run up to the film has been nothing if not fashionable. The four leading actresses shone brightly off screen and got everyone talking during the promotions; whether it was for Sonam Kapoor's unique denim saree, Swara Bhasker's little white dress or Shikha Talsania's summery midis. We have to admit though; most of the spotlight was stolen by Kareena Kapoor.

This being her first cinematic outing since Taimur's arrival only fanned the flames. Be it in flouncy dress or ab-flaunting pantsuits, Kareena's fashion streak has been going strong. But her hairstyle game? Not so much. Besides shiny waves and an updo or two, there wasn't much going on in that department, which isn't exactly unusual for her. Yesterday however, all that changed.

For movie promotions, Kareena wore a chilled out casual look for a change - a striped Dior statement t-shirt with flared blue jeans and pointed pumps. Her hair was worn with a mohawk braid through the centre and either side left in large waves. While her outfit is an average one at best, her delightful braided hairstyle was the talking point. Braided tightly where a mohawk is usually situated, Kareena's hairstyle screams cool girl with an edge.

To get it, one simply need to separate the centre section of the hair with a tail comb so that the parting lines are neat. Beginning from the hairline, the hair section needs to be tightly braided in whatever style one desires. In Kareena's case, it seems to be a regular three strand braid. Plait the hair until the back of the crown and wrap with a matching hair tie. 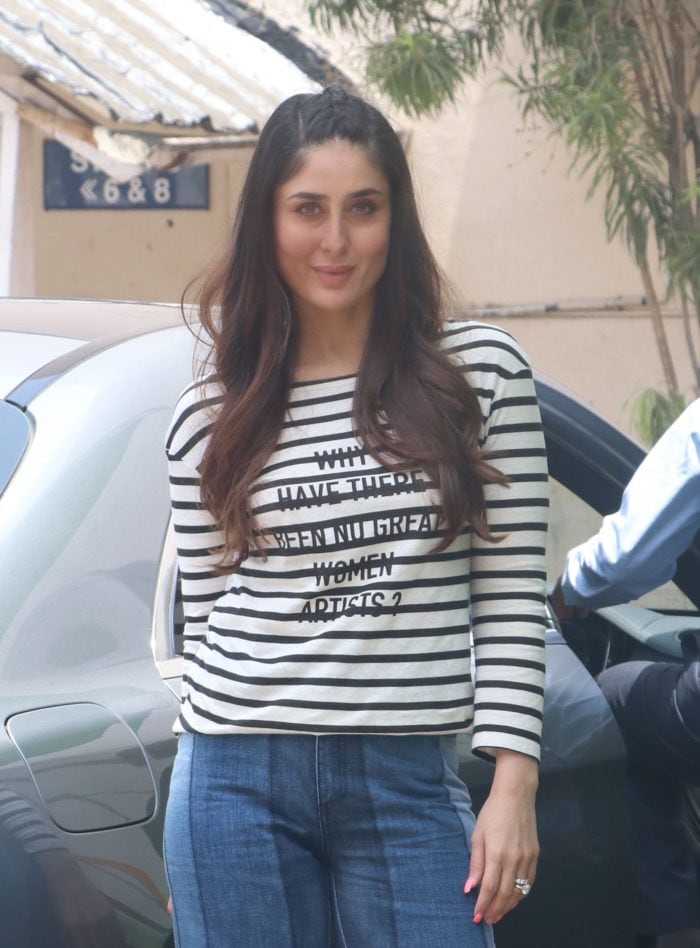 Not as daunting as it seems, isn't it? Especially if you're not keen on experimenting with your hair too much, Kareena's half up - half down 'do is a simple, fun hairstyle to try this season.