Miss World From India: 6 Beauty Queens Who Have Made Us Proud 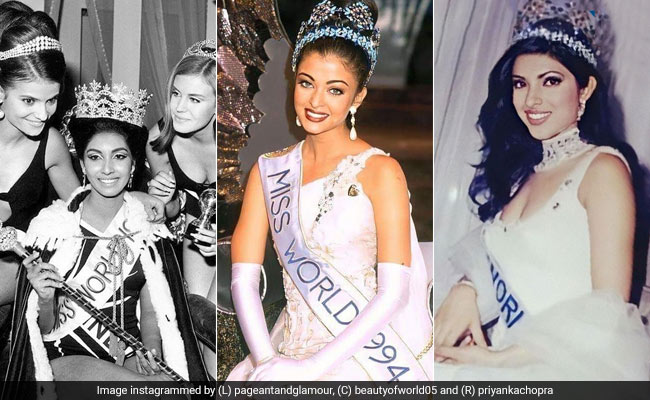 While we all consider ourselves to be beauty queens, there are those who have gone the extra mile to participate in one of the most prestigious beauty pageants in the world and do us all proud by bringing home the crown. Yes, we are talking about the Miss World beauty pageant, which is considered to be the oldest international pageant, running since 1951. Miss World from India, is a title held by a handful of gorgeous women from the country who continue to inspire many girls to follow suit and make a mark. We bring you a roundup of these 6 women who have all been Miss World from India at some point of time.

A Roundup Of 6 Miss World From India

Here's a list of the beauty queens from India who won the Miss World crown:

Much before India's sweeping victory in 1994, thanks to Sushmita Sen and Aishwarya Rai winning Miss Universe and Miss World respectively, it was beauty queen Reita Faria who was the first woman from India and even Asia to win the crown. In 1966, Reita bagged the number one spot after winning two sub-titles - 'Best in Swimsuit' and 'Best in Eveningwear'. A model and physician from Goa, she eventually chose the less glamorous life and went on to pursue a career in medical studies.

(Also read: 9 Of Katrina Kaif's Most Stylish Looks On Instagram)

#Flashback when Reita Faria won Miss World 1966. She was the first Asian to be crowned as @missworld. #MissWorld #MissWorld1966 #ReitaFaria #MissWorldReitaFaria

Bollywood star Aishwarya Rai needs no introduction. After winning the Miss World crown in 1994 (who can forget her in a white, one-shoulder sparkling gown with the iconic blue crown?), there's been no looking back from this Mangalorean beauty. From working her way up in Bollywood to star in super hit films like Devdas, Guru, Hum Dil De Chuke Sanam to going on to Hollywood movies like Bride And Prejudice, The Mistress Of Spices, Provoked, The Last Legion and The Pink Panther 2, Aishwarya Rai has been a renowned name and face across the globe. She continues to be a showstopper everywhere she goes, particularly in Cannes Film Festival with her statement outfits.

• Miss World 1994The revolution for India has begun in 1994 ! @aishwaryaraibachchan_arb is still considered as the most beautiful women ever to win Miss World and she was the only winner who received Life Time Achievement award in Miss World 2014 #missworld #FeminaMissIndia #MissWorld1994 #AishwaryaRai #MissWorld2014 #beautyofworld05

After a gap of a few years, in 1997, Diana Hayden went on to win the title of Miss World from India. The Anglo Indian model also won three sub-tiles Miss World - Asia and Oceania, Miss Photogenic and Spectacular Swimwear. Like Aishwarya Rai, she set out in pursuit of a movie star life in Bollywood with her debut film Tehzeeb, but wasn't able to make a mark in the film industry. In 2008, she was seen in Big Boss as a wild card entry.

Standing tall at almost 6 feet, this Sindhi lady was the fourth Indian to win the Miss World beauty pageant in 1999. She was also crowned Miss World-Asia and Miss World-Oceania during the contest. While now Yukta is actively involved in humanitarian works, she too tried her luck in Bollywood by making her Hindi film debut in Pyaasa with co-star Aftab Shivdasani in 2002. However, she wasn't able to set foot in the industry. Yukta was recently spotted on the big screen in the comedy Good Newwz where she played the role of a IVF centre patient.

In 1999 beautiful Sonia Raciti competed against 93 other women for the 49th Miss World title at the Olympia Hall in London, United Kingdom. Coming off of her Top 5 placement at Miss Universe a few months prior, Sonia managed to do one better by placing as 2nd Runner-up! Yukta Mookhey of India won the crown, with Venezuela's Martina Thorogood placing 2nd. This had to be one of the strongest Top 3's in recent memory! It was really anyone's game right up until the very last moment as all 3 of these beauties gave remarkable performances during the competition. The show itself was also brilliant with an impressive stage, great entertainment and a very energetic feel. #repost @misssabeauties #throwback #missworld #missworld1999 #missmundo #missworldsouthafrica #soniaraciti #misssa #misssouthafrica #misssa1998 #misssouthafrica1998 #missworldindia #missworldvenezuela #yuktamookhey #martinathorogood ##proudlysabeauties #southafrican #indian #venezuelan #beautyqueen #queen ##globalbeauties #beautifulwomen #gorgeouswomen #inspirationalwomen

Priyanka Chopra is a global icon, who has made it big in not just Bollywood but Hollywood too. Her rise to fame was in 2000, when she was crowned Miss World and ever since then, there's been no stopping this lady who has gone on to "shatter the glass ceiling" and make her dreams come true. PC or Mrs Jonas has been truly a role model for millions of girls and she continues to steal the limelight on the red carpet and the big screen, set fashion trends like no one's business and also contribute to society through her humanitarian work.

What a throwback! Barely 18 yrs old with No idea that these many years later I'd still be representing India.. #blessed #grateful

Last but hopefully not the least, there's Manushi Chhillar who is another beauty queen from India who went on to win the Miss World title. In 2017, Manushi made headlines when she wore the blue crown and made India proud once more. Born and brought up in Haryana, this pretty lady has been steadily winning the hearts of her millions of followers on Instagram - from setting fitness goals to making chic fashion statements. She will soon be making her Bollywood debut with Akshay Kumar in the historical drama Prithviraj, where she will play the role of Samyukta, wife of Prithviraj Chauhan.

We only wish this list keeps growing steadily in the years to come.