If someone said this to her daughter on a public platform, would Twinkle Khanna have then responded with "humour has to be seen in the right context?" 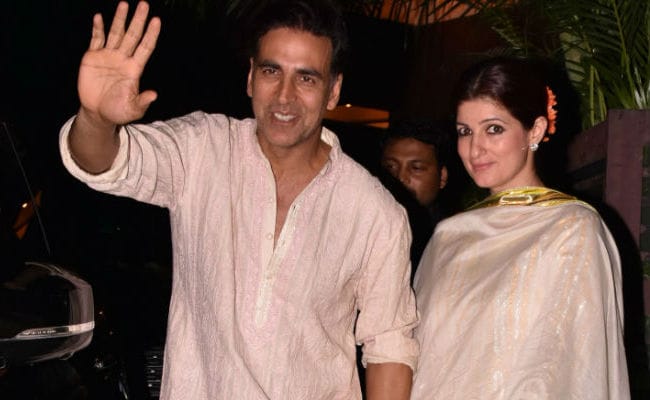 I have always admired Twinkle Khanna for the way she re-invented herself, sidelining the filmy (at least outwardly) and overwhelmingly witty. Her writings have just the right mix of humour, irreverence and social issue, yet this once, we could have done without the author's compulsion to stamp her signature on everything. Sometimes, just occasionally, it is absolutely fine to remain quiet. In her attempt to get the last word, Twinkle tried to prove that one wrong can become a right if a celebrity defends it.

Akshay Kumar in recent years has built an image of himself as an actor who goes beyond standard Bollywood fare for cinema that I suppose is as meaningful as possible within the mainstream framework. Yet, there he was in the promos of this comedy show, portraying a pregnant man  delivering, I guess, some version of entertainment! Money makes the world go around, SRK has never made any bones about it, so how much is too much clearly doesn't apply to our Bollywood stars who seldom take a stand on anything crucial, but probably think they have the last laugh with just how much they earn for the projects they plunge into apart from movies.

That promo eventually got sidelined by the talented Shyam Rangeela, a stand-up comedian whose flawless mimicry of the Prime Minister and apparently Rahul Gandhi did not make it to the final airing of the show. As an aside, we really have not matured enough to learn to laugh at ourselves; or else we have been fed on such a pathetic diet of B-grade talent that when we see someone truly gifted, we get nervous!

Akshay Kumar through it all though kept grinning from ear to ear, perhaps he was trying too hard to fit into the crass genre of Indian comedy when he told fellow judge Mallika Dua, "Mallika-ji, tum ghanti bajao aur mein tumhe bajata hoon (you sound that bell, I will sound you)". We can keep disputing if Mallika's humour is any better and whether this controversy was impeccably timed to surface just when she was sacked as the judge of the show, but social media did remind her that feminism is not something that can be whipped out at one's convenience. But no defence of the actor could take away from the misogyny of  this remark even if Twinkle insisted this is a colloquial phrase used by both men and women.

If someone said this to her daughter on a public platform, would Twinkle Khanna have then responded with "humour has to be seen in the right context?" This is the kind of risque remark that has the potential to instigate even the mildest of men. Akshay himself would probably have practiced those famous black belt moves. Mallika's father journalist Vinod Dua though himself lost the moral high ground by speaking in a language not much better when he wrote of "screwing" the cretin. He has since deleted the post.

At a time when a Weinstein skeleton tumbles out almost daily and Priyanka Chopra has spoken about how even in Bollywood "the big boys club" will boycott or try and wrestle power from the females in the industry, the "bajao" remark by one of our respected actors is unfortunate. Ironic, since this is someone who himself runs an academy for teaching martial arts to hundreds of girls. Perhaps in this instance, Akshay Kumar went with the flow.

Forget the lack of any timing, our comedy shows have nothing comic or subtle about them. They are so cringe-worthy that Archana Puran Singh's sinister laughter was better suited to a horror show and Navjot Singh Sidhu loved to guffaw so hard that it was probably because he knew he was taking the audience for a ride. Kapil Sharma started well but later decided that his USP was being condescending. It was not always like this. When our TV entertainment industry was in its nascent stage, some seriously simple yet funny stuff entertained us. Today the most prominent winning formula for our comedy shows is to dress a man as a woman.

Comedy has dumbed down, which is perhaps all the more reason why Twinkle Khanna should have kept quiet like her husband. In her attempt to sound unbiased, she insisted that even some AIB roasts didn't jar her, but it is easier to laugh when your own family isn't in the firing line. Recently, she was in another controversy, posting the picture of a man defecating on the beach in Juhu, with his face visible. She took it down after she was accused of making a mockery of poverty just to promote Akshay's film, Toilet, Ek Prem Katha.

The man on Juhu beach probably didn't have a choice, but she did. Instead, she chose to tweet this joke. "Why did Akshay Kumar go to the mosque? He wanted to hear some duas".