I Hated Selfies, Until They Saved My Relationship

"As we went through the rows and rows of photographs, we just knew" 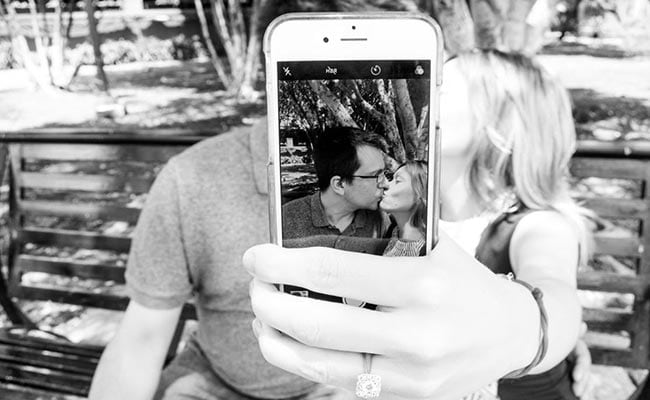 The photos told our story better, and more accurately, than I could have imagined

I have to admit, for as long as I can remember, I've been one of those people.

By those, I mean the kind of person who inwardly flinches and groans every time a friend whips out their phone to capture our moment of togetherness (often inanity) and save it for posterity.

By those, I mean the kind who rolls her eyes and grumbles while trying to sidestep selfie-taking strangers on the road, restaurants, salons, and, well, everywhere.

By those, I also mean the kind who radiates disapproval and judgement when friends lovingly post photographs of their partners/ pets/ plants/ progeny... You get the drift.

I'm not proud of it, but in my more churlish, grouchy moments, I have been known to accidentally-on-purpose splice off the top of heads, ears, extended limbs, etc., when called upon to take photos of grinning strangers (and sometimes, even friends).

Perhaps it is a natural aversion to anything that even remotely resembles narcissism, or maybe it's something as base as all the years I spent feeling like the fat, frowning kid in childhood photographs; either way, I know few people who abhor being photographed as much as I do.

For a long, long time, my phone's storage stayed blissfully devoid of photographs. When people around me waxed eloquently, passionately, and, on a few occasions, orgasmically, about unlimited cloud storage, expandable memories and suchlike, I'd look at them like they had suddenly sprung horns. What on earth could one possibly need so much space on their calling/ texting device for.

All of that changed when I met someone exactly like me.

We were like two peas in a pod, except he had that pool of confidence one is conditioned into from birth, when one owns a penis. Plus, there was this little thing about not being judged quite as harshly for making acerbic comments about vanity.

So, while I thought uncharitable thoughts and frothed silently over constantly having to navigate public spaces to avoid the cameras in every direction and angle conceivable, he didn't bother himself with showing the world the same kind of consideration.

He would routinely walk in the way of people's photographs, supremely unconcerned about the angry protests and shocked glares. I would be somewhat annoyed with his complete disregard for acceptable social behaviour, but secretly impressed that he cared so little about log kya kahenge. The fact that he was so unaffected by their criticism of him would routinely piss his friends off.

It started as a joke.

For no reason more profound than to exasperate him, I started taking selfies, with him as the reluctant, pained co-subject. He couldn't find it in his heart to say no to me, so he went along with it, but not without marking his protest in the form of expressions that included everything -- from Mogambo's bulging eyes to Shakal's thin-lipped cruel smile.

Slowly, over months, without realising it, we built a confused, weirdly stacked scaffolding of our highlights and lowlights, moments that were weirdly memorable, but also so entirely mundane.

Looking back, those photos probably told our story better, and more accurately, than all my messy musings scribbled on paper napkins and the back of my many notebooks and diaries. It was a not inconsiderable wound to my writer's pride; but then karma has always been a meticulous record-keeper and exacting equaliser.

Like relationships are wont to do, ours had a major moment a few weeks ago. We hurt each other in a way that is impossible to forget, even if it is forgiven. Our moment held none of the drama of a fierce fight, just the bleakness of two hearts quietly breaking. I remember sitting in a café in Delhi's biting cold, one late evening, discussing our separation with a calmness and dignity I didn't feel. He went along with it.

The logistics discussed and decided upon, moments before we went our separate ways, he made me one final request: since all the photos of our time together were on my phone, he asked me to send them to him.

A part of me wanted him to suffer, knowing that I had memories he would never have access to. The other, bigger part, the one that was still desperately in love with him, couldn't deny him that little respite.

We sat together, scrolling through the rows and rows of photographs. Dozens, possibly hundreds of them. The time when he sang cheesy Hindi songs outside the hospital my father was being treated in, to cheer me up. The time when he read something I had written only for him. The time when he walked into a room filled with flowers on his birthday. Us at the launch of my book. Us, at the many times we met at airports. Us, during midnight walks by the sea in Mumbai. Us, as he mercilessly made fun of me while I struggled with chopsticks at the many Japanese restaurants we frequented. Us, with my eyes tightly squeezed on monster roller coasters...

It was a long time before we reached the end of the virtual film roll. It was an even longer time before either of us spoke. I'm not even sure if either of us said anything, or if we did, who spoke first, or what the words were that came out of our mouths. Maybe I don't remember because it doesn't matter to our story. But somehow, in that moment we knew. Somehow, we just knew this wasn't the end of the road for us.

The next day, we spoke about healing, separately and together, and the long, difficult road to recovery.

Maybe we were never meant to stay away; maybe eventually, we'd have found our way back to each other. I don't know.

What I do know is this, that for all my teeth-gritting and seething, selfies saved my relationship in a moment when I didn't know how to. And for that, I'll always be grateful.

Although, I still draw the line on the visual assault that is duck faces and food photos that social media is swollen with. I mean, no. Just no.