My desi girl, my not-so-desi girl. Is there anything Priyanka Chopra doesn't look stunning in? 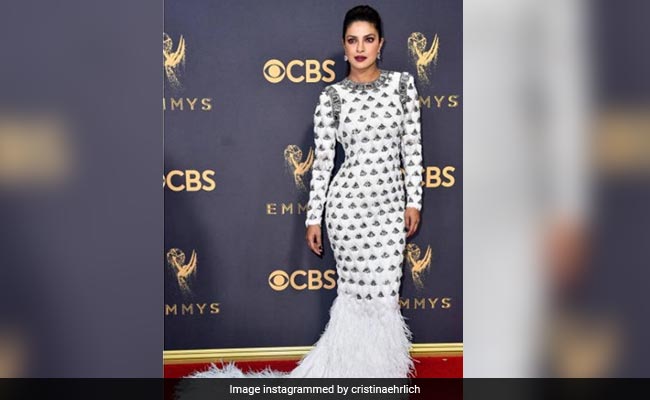 Actress, singer, producer, philanthropist - is there anything left for Priyanka Chopra to master? From headlining an American TV series to co-starring with The Rock, Priyanka is someone who clearly loves experimenting and pushing her boundaries. Add fashion to the mix. Whether she is covering national and international magazines or killing it on the most glamorous red carpets of Hollywood, Priyanka's fashion game is almost always on point. Shuttling between two countries, she's aced the art of on-the-go dressing, helped by her two styling teams -- one in the US, the other back home, of course. She has a knack of pulling off the most unexpected outfits, and we love that we never know what to expect from her next. The only thing we're certain of is this: Priyanka Chopra never shies away from taking a fashion risk and showing off her bold sense of style.

Here's a roundup of her best style moments this year.

This sequined golden Ralph Lauren gown with a daring neckline definitely made heads turn and the fashion police sit up and take notice. It landed her on several worst-dressed lists, but we loved it. Co-incidentally, she was also caught twinning with friend Sofia Vergara that night.

Priyanka Chopra flew out to Mumbai for the talk show with Karan Johar. She made a solo appearance in a Fendi dress and this look was quite unexpected, given that most other guests on the show opted for more fun, vibrant clothes this season. We told you, we never know what to expect from her. Nevertheless, she looked quite lovely.

In a muted peach Sally LaPointe dress, PC won the Favourite Dramatic TV Actress for her role as Alex Parrish in Quantico. She couldn't stop prancing in her fringe dress. Paired with a pair of metallic heels, she looked fun and classy - an almost impossible combination to pull off. Though we would have loved to see a pair of statement earrings with this dress.

Priyanka clearly took a bit of a break from all the high fashion and glamour at a pre-Oscar event. Dressed in Chanel separates and smoky eyes, this look can easily be copied by us mere mortals and worn to office. What say, ladies?

Many celebrities chose Ralph & Russo for the Oscars' red carpet this year and Priyanka Chopra was in that list too. The structured geometric gown with glossy lips and sleek hair was a really strong, sophisticated look on her, and one of our favourites, by far.

In a sequined black Michael Kors gown with sleek hair, maroon lips and smokey eyes, she got it right. And that figure. Wow.

In a sheer dress by Fendi and a dainty half bun, Priyanka managed to play Holi with Jimmy Fallon on his show. We loved it all.

For Harper's 150th anniversary, Priyanka was seen in a J Mendel dress. With cute ruffled sleeves and collar, PC looked stunning, as usual. It's very clear that Priyanka loves this particular neckline.

This is one look that surely has gone down in history. Priyanka chose to wear a trench-gown by Ralph Lauren for the Met Gala this year. She may have become the unwitting star of many desi memes, but we loved the brave, eye-popping choice. More of that, please, PC.

In a Sabyasachi saree for the gala, we loved that Priyanka chose to go traditional for once. And that hand painted tiger on her blouse is everything.

For her first Hollywood debut and premiere, Priyanka Chopra wore a sequined Halston gown with a split in the middle. With her hair tied back and strappy black sandals, we wish she had added a necklace or maybe a pair of statement earrings.

In a Zimmermann floral dress, Priyanka met with the PM in-between her film promotions while they both were in Berlin. She was widely criticised for exposing her knees in front of the PM, which is ridiculous, of course.

Vintage vibes with Altuzarra, we think this was a fitting choice for a polo game. Polka dots are becoming a hot favourite amongst celebrities, we must say.

In Armani, at Armani. We're not too sure about the length of this dress. It looks like if she just moves a little, the dress will fly up and result in a major fashion faux pas. Though she did manage to carry it off well.

For the screening of this Marathi film she produced, Priyanka Chopra chose to be very understated in Chola The Label. Safe and simple, but we loved it.

In a Balmain feathered gown for the Emmys, PC stunned everyone. Another one of our favourites, she pulled this look of effortlessly. There's just the right amount if glam and drama in her look.

For the United Nations Global Festival, PC totally slayed her look. In a matching mini dress with thigh high boots by Fausto Puglisi, she looked like she had a lot of fun, didn't she?

With so many hits, Priyanka Chopra has raised the fashion stakes immeasurably. Let's see how she raises her own high bar in 2018.

Which is your favourite look on Priyanka? Tell us in the comments section below.