Show your support for your favourite character in a fan t-shirt (Image Credit: Game Of Thrones)

Game of Thrones is so much more than a TV show, it's a phenomenon. Ever since it premiered in 2011, millions of fans across the world have discussed, debated and even fawned over the series. Currently, the 8th and final season of GoT is underway and besides live-tweeting every gruesome death that takes place, another way to show your fan spirit is in a t-shirt. We've picked 9 Game of Thrones tees to show your support in before this season ends.

The Crazy Sutra T-shirt is a white polyester t-shirt that takes only the best qualities of the series' greatest heroes.

The Print Bharat T-shirt is a blue cotton t-shirt that emphasizes just what Tyrion Lannister does best. 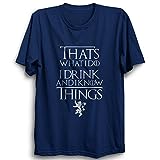 The Urio Printed T-shirt makes sure you don't forget that strength is present in a pack.

The Game of Thrones by Free Authority Character Print T-shirt has a distressed grey wash with a blue emblem print to show which house you're in.

The Print Bharat T-shirt is a black cotton round neck t-shirt for those who say aye to house Targaryen. 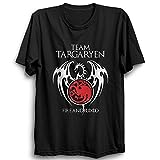 The Print Bharat T-shirt is a grey cotton t-shirt that will make sure you don't forget about the most talked-about fictional wedding of the decade.

The Game of Thrones by Free Authority Jersey T-shirt is collector-worthy for superfans with the show's popular catchphrase. 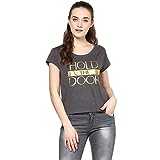 The Geek Dawn Graphic T-shirt celebrates Arya Stark, an inimitable character through this season and past ones too.

The Print Bharat T-shirt is a black cotton round neck t-shirt that one ups the idea of wanting to be a princess. 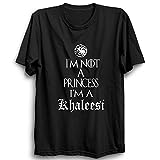