Sonam Kapoor went all traditional except for her reception look 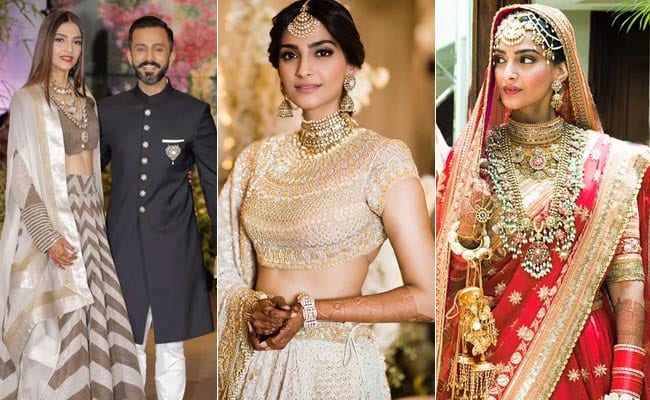 Sonam Kapoor in her wedding attire

And it's all done! Sonam Kapoor's fairytale wedding with Anand Ahuja went off phenomenally, thanks to their family and close friends who left no stone unturned to make their special day a grand success. Being the fashion icon that Sonam is, there was much buzz about which designer outfits the Bollywood diva would be wearing for her big day. But Sonam succeeded in keeping her looks under the wraps and making us all wait in suspense up until the last moment. And as expected, she impressed everyone with her choice of stunning wedding outfits.

Sonam had earlier revealed that despite commonly being seen wearing bold and contemporary designs, for her wedding she would be going all traditional. She did just that and looked like a stunning Punjabi bride.

Her wedding celebrations had kickstarted with a pre-mehendi function where the Veere di Wedding star wore a pastel pink and lilac sharara suit designed by Anuradha Vakil. It had intricate embroidery detailing in gold thread and was heavily embellished with beads and zardosi stones. Sonam wore a matching dupatta with heavy brocade borders, and kept her makeup and hairstyle simple, except for that statement earrings.

What it’s all about. My #everydayphenomenal

For the 'shades of white' themed mehendi and chura ceremony, she looked like a dream in an ivory and gold Abu Jani Sandeep Khosla lehenga with intricate chikankari detailing. She teamed it with gorgeous gold and polki jewellery - jhumkas with pearl saharas, her mom's choker necklace, maang tikka and chunky bracelet - while wearing a gajra with her braided hair. 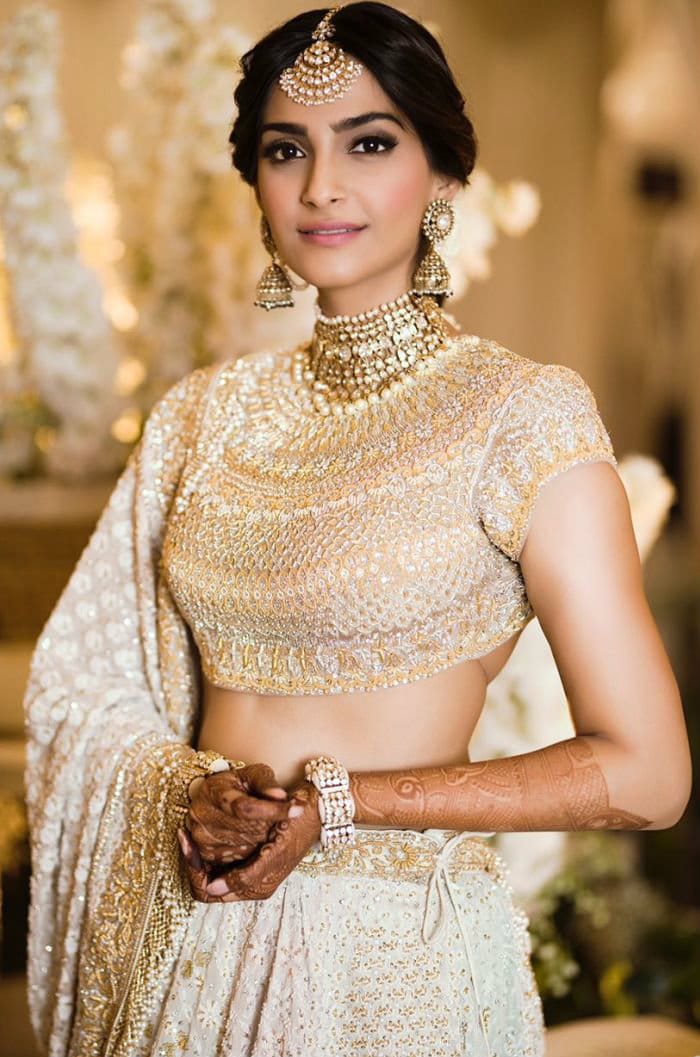 For the main wedding function, she picked a traditional red lehenga from designer Anuradha Vakil with lotus patterns and embellished borders. Her outfit was accompanied by traditional jewellery - a sarpech on her head, a gold choker, a raani haar and haath phool - along with red choora. 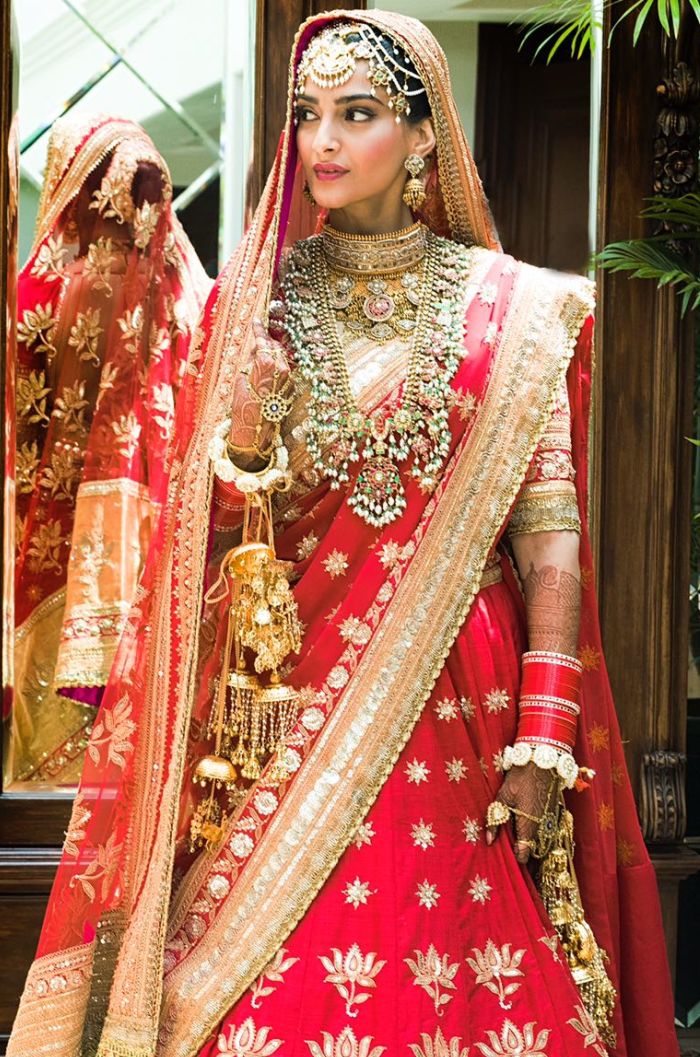 Right after the wedding, Sonam changed into a pretty Anamika Khanna lehenga in pastel pink and lilac. Her hair was tied into a gajra bun and she wore statement earrings and churra to accessorise her look. The couple had a little cake cutting ceremony with the groom's family.

And then you realise that only love is real and it melts your cynical heart, for a match like this, had to have been made in heaven congratulations @sonamkapoor @anandahuja, I heart you guys! #everydayphenomenal

For the grand reception party, however, Sonam got back to being her usual self and experimented with her look. Rather than picking bright colours, the bride instead chose earthy tones and wore a quirky lehenga designed by Anamika Khanna in grey and copper. The full-sleeve blouse featured stripes at the hem and she teamed it with a chevron printed lehenga and sheen dupatta. She accessorised her outfit with a heavy four-tiered diamond necklace while sporting smokey eyes, bold red lips and sleek straight hair. 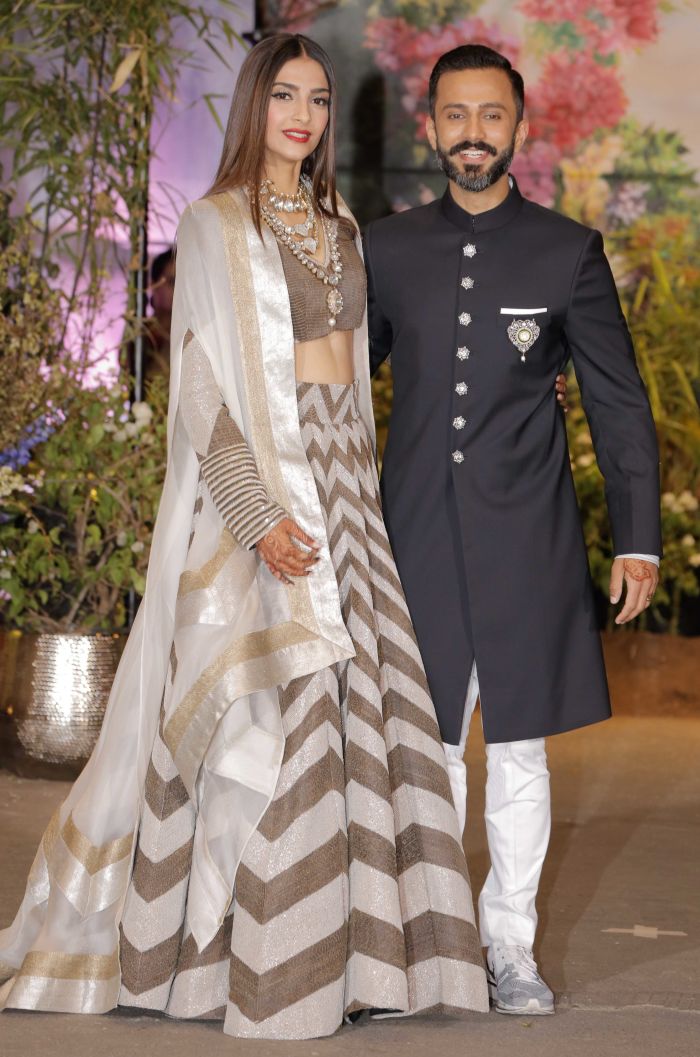 Later in the night, Sonam was seen changing into a comfy kaftan, which had delicate chikankari work. She kept her statement polki jewellery on and went on to the dance floor to have a blast with her star friends.

* no filter needed* @sonamkapoor I wish you all the love in the world!

Impressed by her style statements? Wait till you see what she wears in her upcoming film Veere di Wedding, which is slated to release on 1st June.