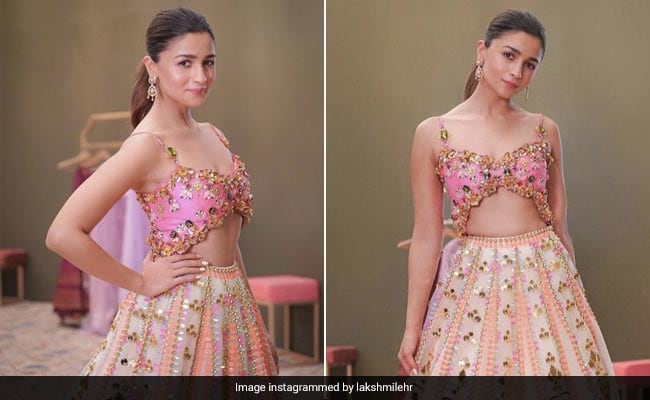 We love the eclectic take on ethnic wear

We just can't get over our love for ethnic wear. Thanks to Bollywood celebrities like Alia Bhatt who romance the saree and lehenga like regal fashion queens. Yes, we are gushing over Alia's fashion sensibilities once again. There's nothing to be surprised about because the actress makes heads turn in whatever ensemble she wears. Recently, she wore a pink and off-white lehenga set. Believe us or not, no one can keep their eyes off Alia. The actress' pink embellished butterfly blouse had straps for support and 3D embroidery for added emphasis. The tulle lehenga was designed by the fashion brand Papa Don't Preach. The lehenga featured sequins and acrylic embellishments. Alia's blush makeup and sleek hairdo looked perfect. Dangler earrings completed the look.

A post shared by Papa Dont Preach by Shubhika (@papadontpreachbyshubhika)

Alia Bhatt's ethnic looks are a tale of awe and wonder. From traditional looks to modern twists in ethnic ensembles, Alia has done it all and how. The actress left us speechless in a futuristic silver saree that also featured a see-through expanse. She wore the drape with a sleeveless silver blouse that featured a plunging neckline and a backless detail.

Alia Bhatt looked breathtaking in a floral saree too. The solid white base did justice to the contrasting prints in red and green. Alia's sleeveless blouse was just the right choice for the outfit. The actress wore jhumkas for a traditional appearance.

It's not just sarees and lehengas that look good on Alia Bhatt. Even a pristine white salwar suit can make us swoon when Alia styles it. The number had golden embroidery and layered fabric. Alia carried a mesh white dupatta and wore elaborate golden dangler earrings. A red bindi completed the look.

Also Read: All That Glitters Is Surely Alia Bhatt In A Golden Sequinned Saree

Alia gave a breezy touch to the saree look when she opted for a multicoloured polka dot number. She wore a bralette-styled strappy and buttoned blouse to the look, which added a casual vibe to her silhouette. Take a look:

Alia Bhatt's ethnic style statements are always on point. Don't you think so?

Also Read: Alia Bhatt, The Golden Girl In A Stunning Sabyasachi Lehenga With A Velvet Dupatta