With the likes of Malaika Arora and Karisma Kapoor, Natasha Poonawalla's guest list seems to have been a rather fashionable one

Sonam Kapoor and Anand Ahuja's wedding is having a serious ripple effect. Even a few weeks after the much talked about (and seen) wedding, the celebrations don't seem to have ended. Sonam and Anand's wedding was one that all their fans got to witness almost first hand, thanks to the myriad videos and pictures shared by their friends and family on social media. Sonam and Anand noticeably jumped back into their work routines right after their wedding - with Sonam heading to Cannes and promoting her film, Veere Di Wedding and Anand working on the launch of his clothing store, Bhane, in Mumbai. All of their work commitments seem to have left some of their friends with an unfulfilled desire to celebrate some more. It's no wonder that Sonam's friend, Natasha Poonawalla decided to throw a bash to celebrate the couple all these weeks after the actual wedding celebrations.

Sonam and Anand arrived together at Natasha Poonawalla's party hosted in Mumbai, but of course. Sonam Kapoor looked like her glamorous self in a royal blue off-shoulder gown from Spanish label, Sophie Et Voila. Anand looked rather dapper himself in a black striped suit. Sonam went for a sleek pulled back bun and red lips. Her accessories were kept minimal with what seems like a diamond choker. We're not loving the choice of shimmery ballet flats - but Sonam seems to have pulled her overall look with ease. Even the rather low bust line. 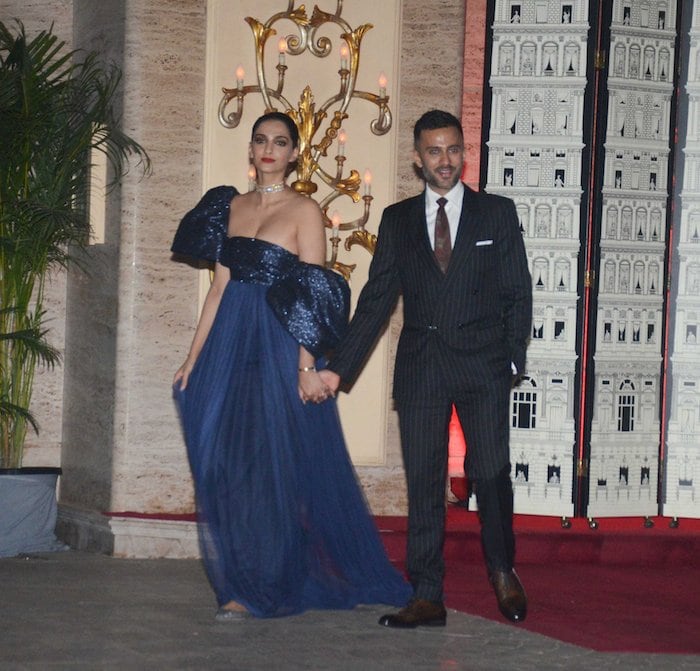 The producer of the film of the hour, Veere Di Wedding, and sister of the bride, Rhea Kapoor seems to have done well in the fashion department too. She is after all, also Sonam Kapoor's stylist for most occasions. Rhea wore a striped shirt with exaggerated sleeves and a wide V neckline. She paired it with flared navy blue pants. Rhea kept her hair straight and sleek with a centre parting and much like her sister, she too chose to wear a shimmery choker style necklace. 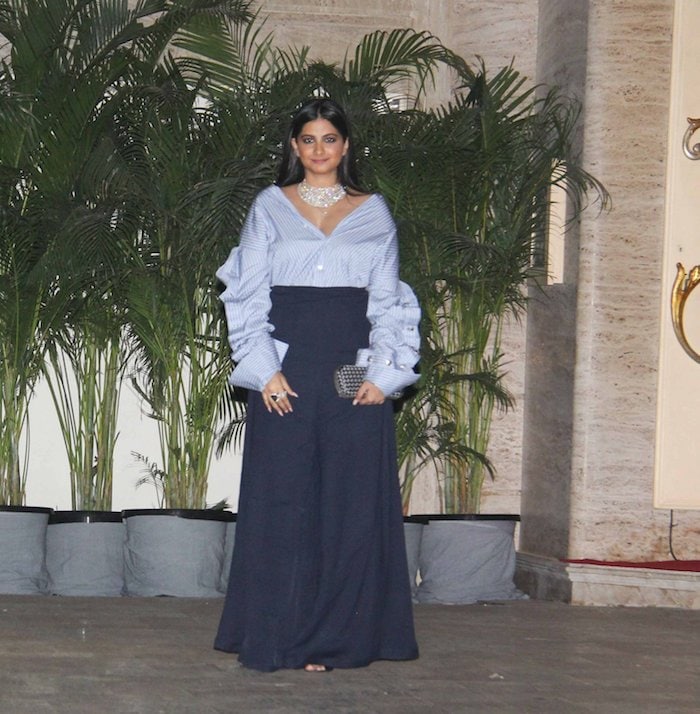 Karisma Kapoor, a close friend to both Sonam and Rhea was present at the party too. Karisma wore a sequin black and bottle green dress from Lanvin. She paired it with black ankle strap sandals and black clutch. 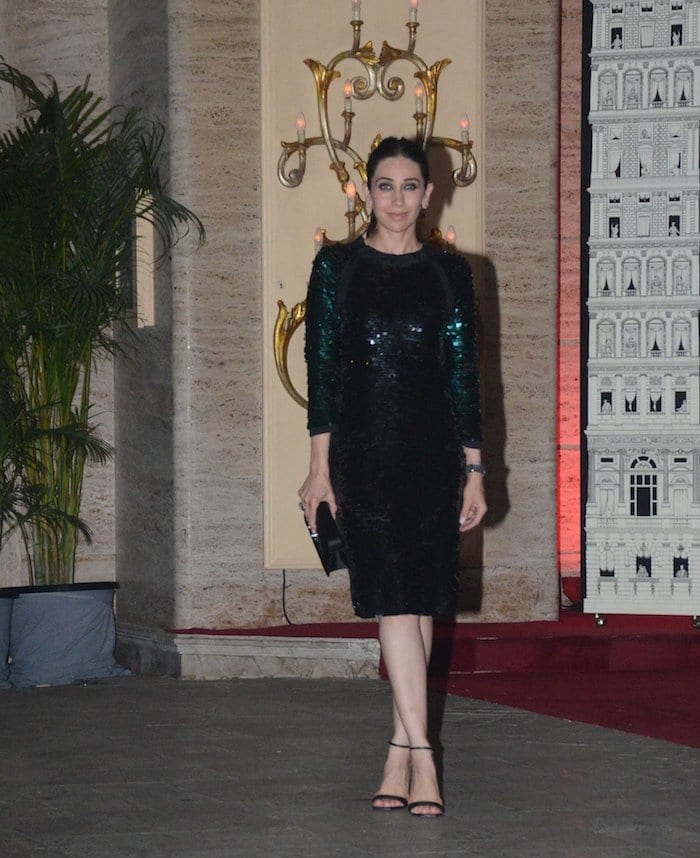 Malaika Arora was present in all her sultry glory. This diva never fails to scale the fashion charts with her modish sartorial choices. For Natasha Poonawalla's party, Malaika wore a silver snake print pant-suit, which she paired with a glittery black strapless bustier. Malaika completed her look with a red YSL sling bag and black Louis Vuitton heels. 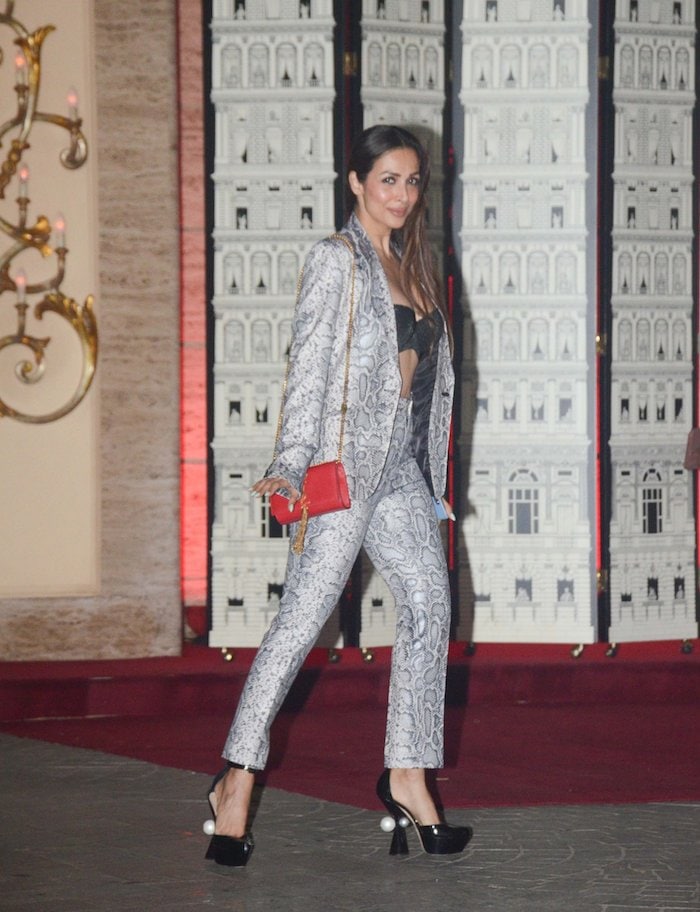 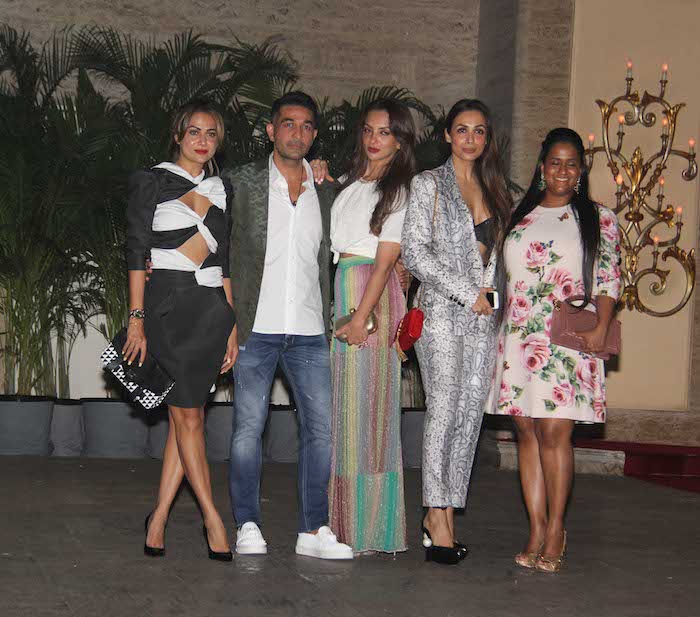 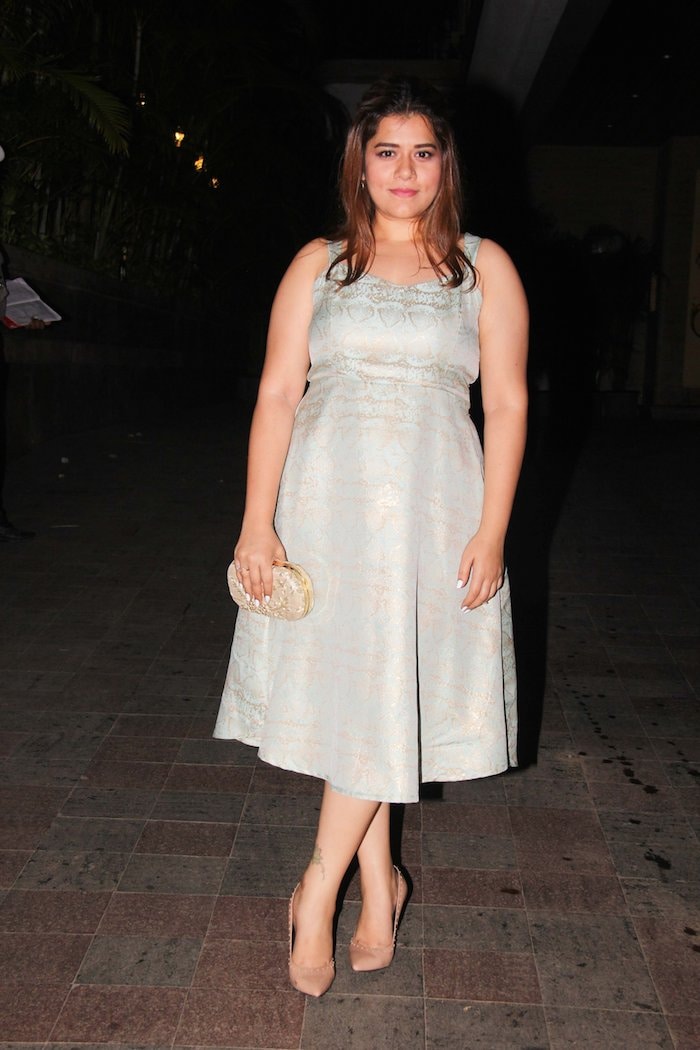 Designer Masaba Gupta made her presence felt in a white off-shoulder, faux corset top from Brock Collection. She paired it with black pants and a pair of brown heels. 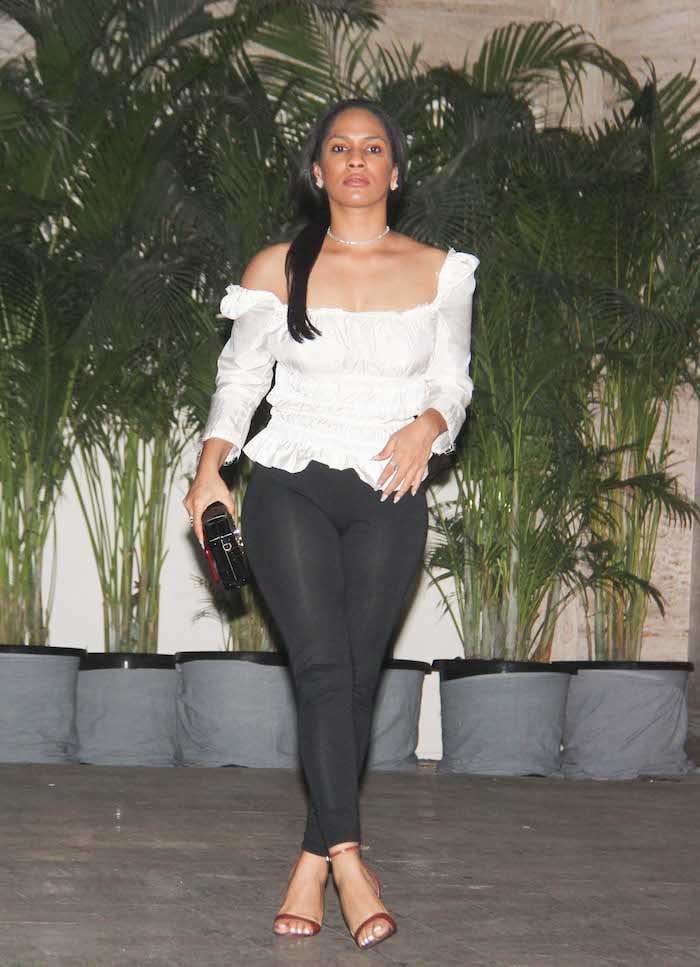 That seems to have been one fashionable guest list and most definitely an uber chic party. Sonam and Anand definitely have friends that love them - and so continues their wedding excitement.