One last look at last year's glitziest weddings, all decked in Sabyasachi 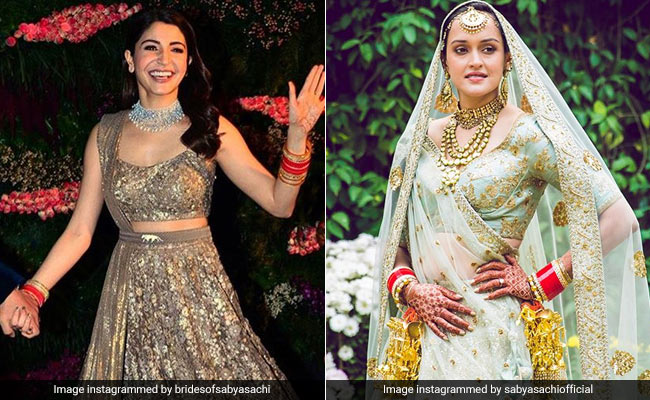 Designer Sabyasachi Mukherjee has summed up his annus mirabilis in a series of Instagram posts listing the many stylish celebs who wore his creations in 2017. In the year that was, Sabyasachi dressed celebrity brides like Anushka Sharma and Samantha Ruth Prabhu in addition to his extensive A-list clientele, like Sridevi and Nita Ambani, who turn to him for occasion wear. Deepika Padukone made a standout appearance in a an embellished dress by the designer at the Elle Style Awards. But for sheer glamour, nothing topped the fairy tale bridal outfits created for the brides of Sabyasachi.

The 29-year-old actress married cricketer Virat Kohli in a semi-secret ceremony at an Italian resort last month. Anushka was dressed by Sabyasachi at - the engagement, the mehendi, the wedding, the Delhi reception, the Mumbai reception. That's a lot. So we'll pick just a few from the posts Sabyasachi shared.

Actress Samantha Akkineni, as she is now, married Nagarjuna's son Naga Chaitanya in October-November. The couple had a Christian wedding as well as one according to Hindu rites. For this, Samantha picked a Kanjeevaram by Sabyasachi.

A post shared by Sabyasachi Mukherjee (@sabyasachiofficial) on Jan 2, 2018 at 7:31pm PST

Just weeks before Anushka and Virat made it official, they were spotted dancing at cricketer Zaheer Khan's wedding to actress Sagarika Ghatge. The Chak De! India star wore this cream and gold Sabyasachi lehenga at one of her several functions.

Nafisa Ali's daughter also had an end of the year wedding like Anushka, wearing an unconventional blue lehenga. Sabyasachi's Instagram reveals not just the details of the outfit he created for the bride but also his personal connection with Ms Ali, best remembered for her role in Shashi Kapoor's film Junoon.

For the Aisha actress' Udaipur nuptials, Sabyasachi created this intricate lehenga bursting with beads, pearls and sequins. 'Fairy tale,' is how he describes the wedding in his post - it describes Amrita in her wedding lehenga perfectly.

That was Sabyasachi's year. Here's to an equally stylish 2018.