Gold was definitely the colour of the evening at this happening engagement. Check out the best dressed in gold

Won't you say gold is an emotion?

Although it is Monday morning, and some of us are still reeling under the, albeit light but still present, Sunday night hangover there is a bigger hangover we can all talk about. With all the pictures and videos from Shloka Mehta-Akash Ambani's engagement last Saturday still making rounds, it is clear that social media is still reeling under THAT hangover. But let's be honest, we can't blame them, can we? It was one star-studded evening with a lot of good clothes, a lot of people, a lot of celebration, and apparently a LOT of fun (did you watch that flash mob video from the engagement? Ranbir Kapoor, Arjun Kapoor, Shahrukh Khan, Abhishek Bachchan, Nita Ambani all joined in).

But lets about the fabulous clothes that were seen at the engagement. We all may have thought that the Sonam Kapoor-Anand Ahuja wedding was "Woah!" but this one was just something else. But that was to be expected considering the star quotient was on an all-time high through the evening. The girl of the hour, the bride-to-be, Shloka Mehta was wearing a beautiful floral Abu Jani and Sandeep Khosla creation - quite colourful and out at all over the top. 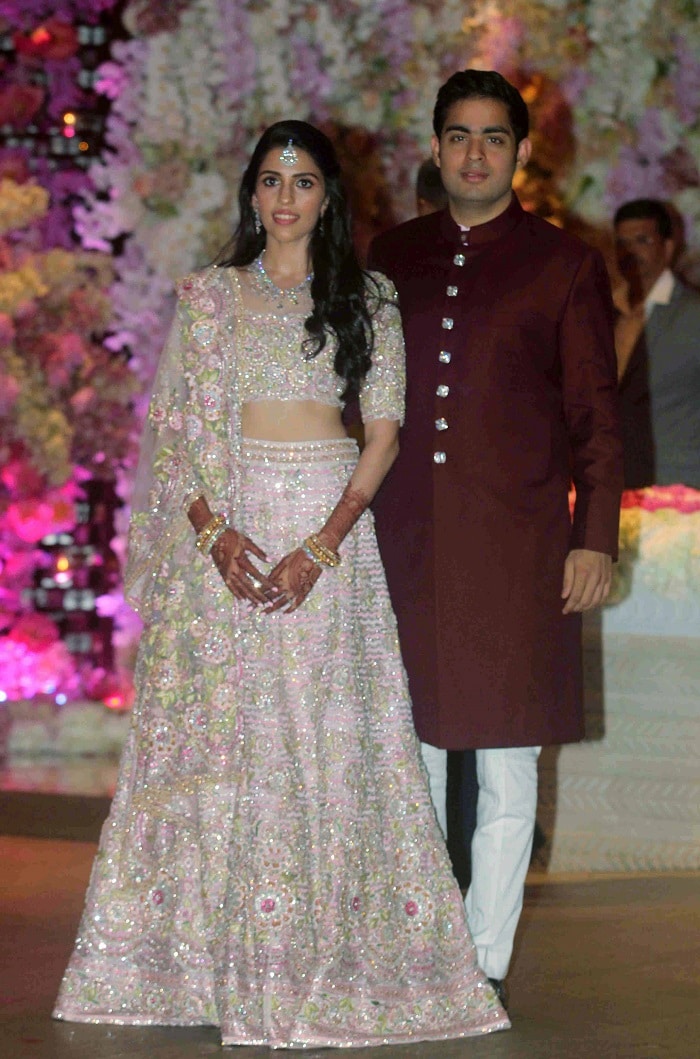 But all in all looks like the colour gold was the colour of the evening. Again, no surprises. If you don't see gold and/or red at an Indian wedding, feel free to be surprised - a lot. But this one didn't disappoint at all. Check out the best gold looks from the Antilia carpet.

(Also Read: The 8 Best Dressed Celebrities Who Stood Out At Sonam Kapoor's Wedding)

The actress who looked like an absolute diva in a golden Abu Jani and Sandeep Khosla lehenga was Alia Bhatt, Just look at her, statuesque and emanating oomph. The shimmering skirt is only made better with the studded choli. 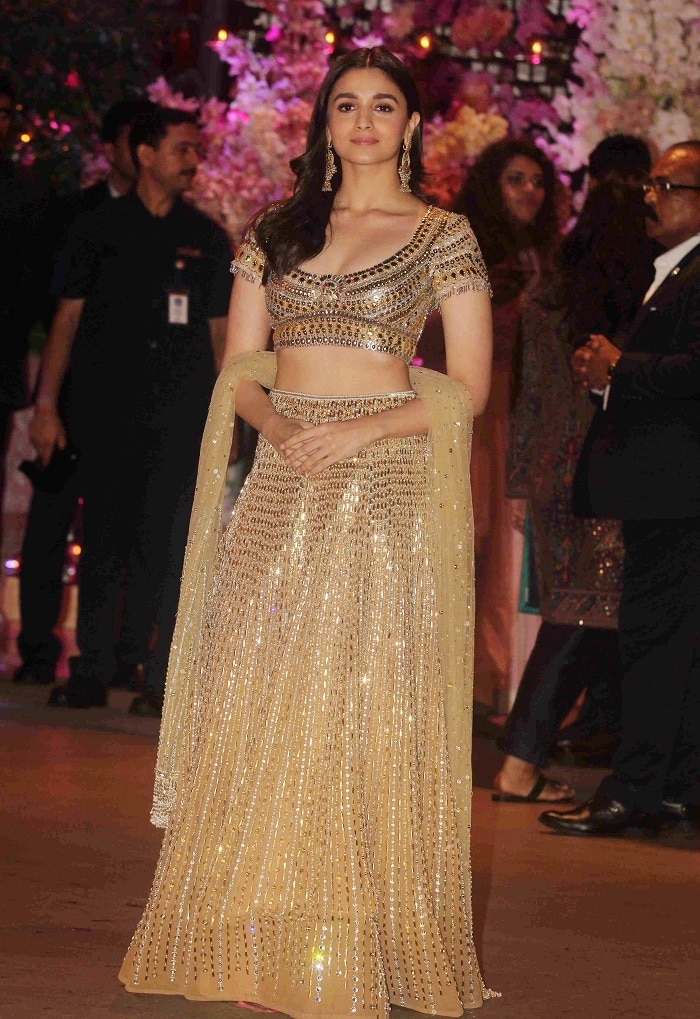 Rani Mukherjee in Sabyasachi was another looker. The beautiful chunni with a solid kurta stole the show with its glittering beadwork. Rani also wore statement earrings that topped the look off well. 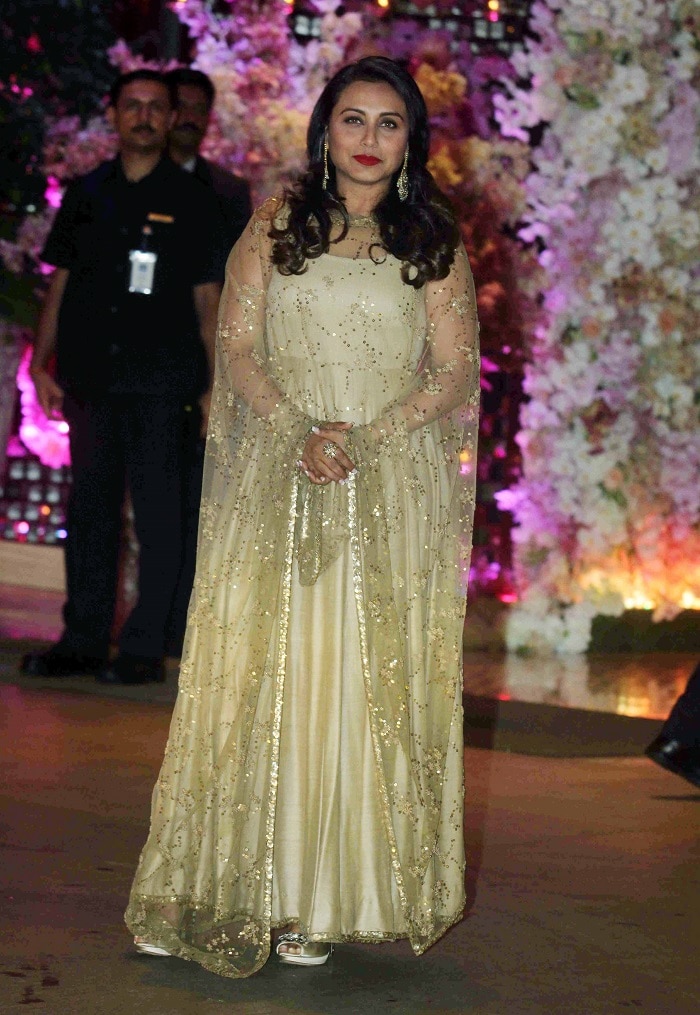 (Also Read: From Kangana Ranaut To Priyanka Chopra: Who Wore What At The #Virushka Wedding Reception In Mumbai)

Aishwarya Rai Bachchan's Manish Malhotra saree was also quite a statement-making attire, but we wish the work and embroidery on it was more defined. But this is Aish we are talking about, so obviously, she rocked the look and how. 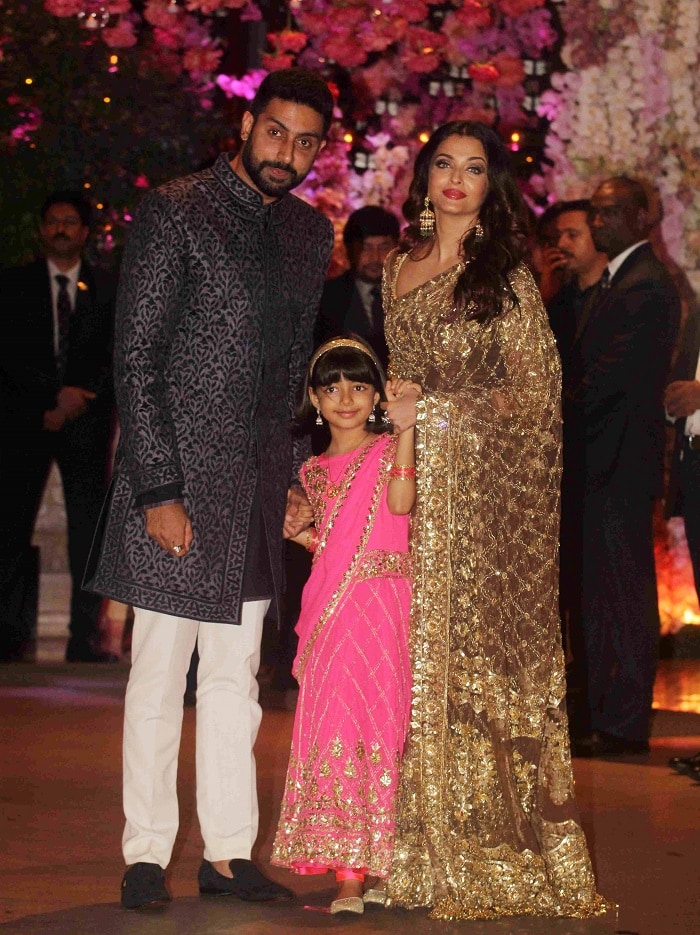 Kiara Advani wore an Abu Jani and Sandeep Khosla lehenga that was absolutely resplendent. The floral motif repeated in gold work all over the skirt looked breathtaking. Trust Kiara to rock it off like a goddess, with red lipstick to go along. 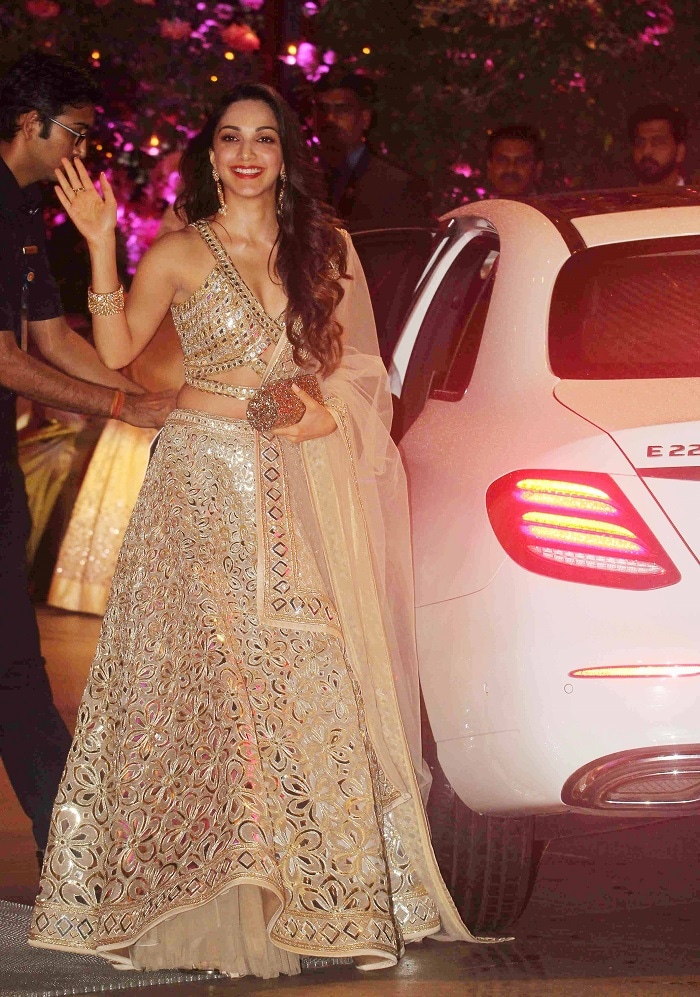 Looking absolutely stunning in a golden silk handloom saree was Kiran Rao. Unmistakable, and glamorous like no one else... 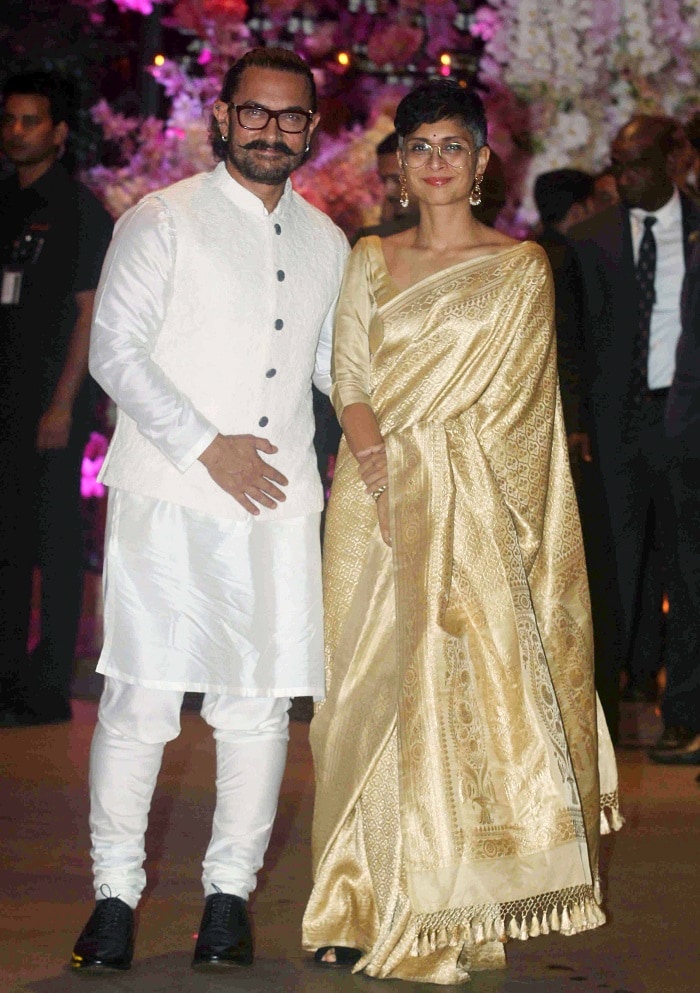 ...apart from Rekha that is. But Rekha is Rekha! The ultimate and the bold lady wore a royal silk saree that would make itself be noticed from blocks away. And does anyone do old world charm the way Rekha does? That gajraand the potlishould be your answer. 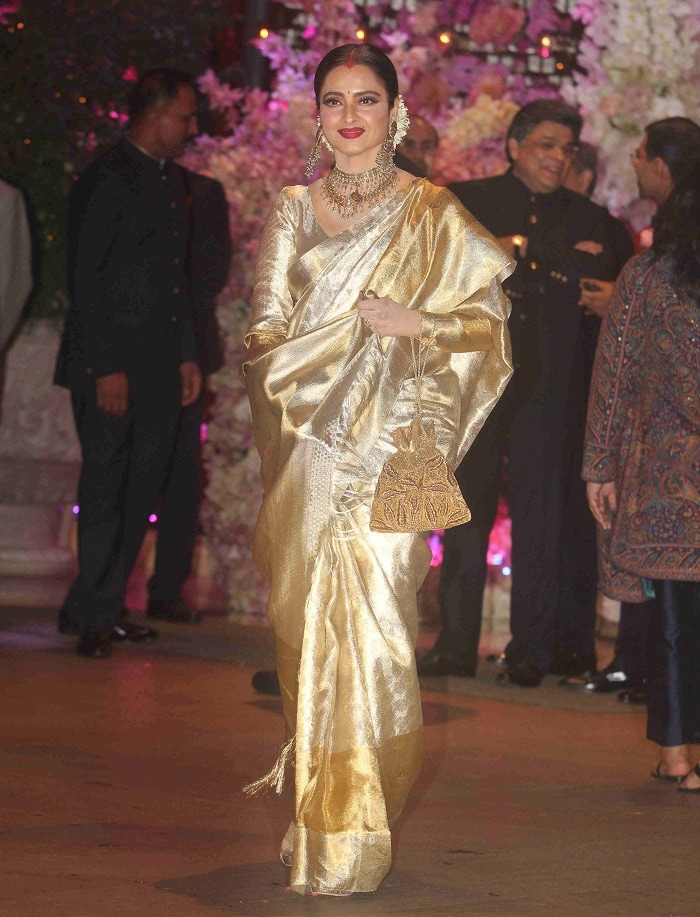 A special mention for Mira Kapoor's Manish Malhotra attire with its handcrafted gold embroidery - definitely the winning factor for the outfit. 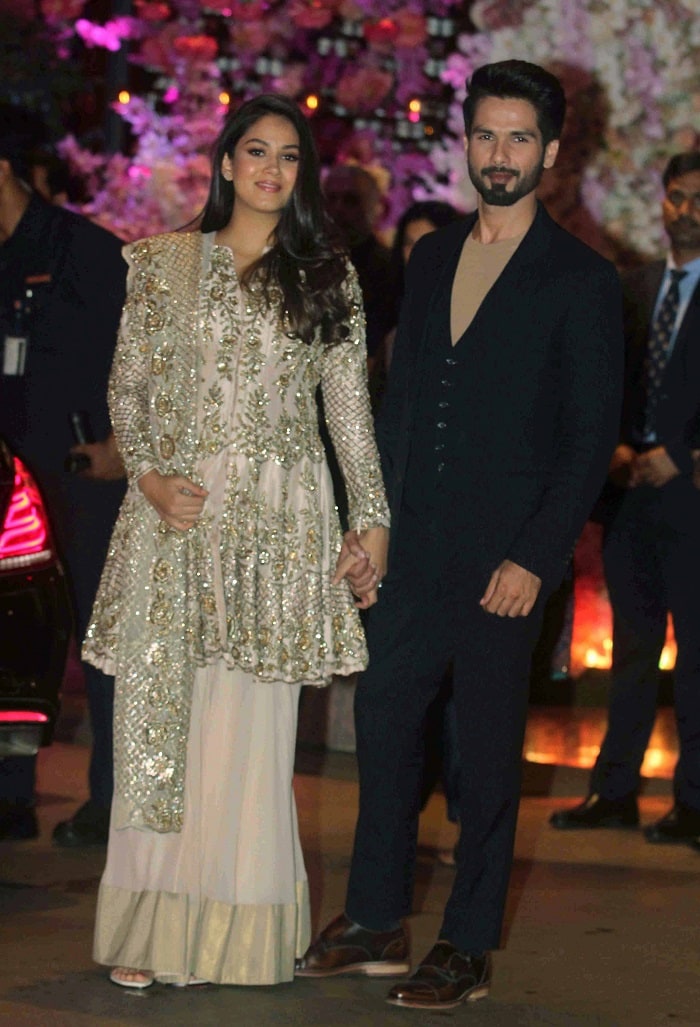 Won't you say gold is really an emotion, a feeling?

Well, we can't wait for the wedding, can you?