At Meghan Markle-Prince Harry Wedding, These Guests Will Be In Raw Mango Sarees

Activist Suhani Jalota and women from her Myna Mahila Foundation will be at the wedding, wearing Raw Mango no less The Meghan Markle-Prince Harry wedding this weekend just got a desi tadka - a spot of blazing colour among the wedding guests will mark an Indian contingent. Activist Suhani Jalota and women from her Myna Mahila Foundation will be at the wedding, wearing Raw Mango no less. An article in Vogue India, posted on social media by Raw Mango, reveals that Ms Jalota's foundation is one of the charities picked by Meghan and Harry to which wedding guests can donate in lieu of presents. Representatives of these charities will also be at the wedding, Suhani Jalota among them. Wearing Raw Mango - we repeat ourselves because, as Ms Jalota told Vogue, there is a reason she picked designer Sanjay Garg's label.

"Raw Mango has a similar philosophy to ours in encouraging individuality and embodying powerful women. We could really relate to Sanjay Garg's humble beginnings," Suhani Jalota, 26, told Vogue.

So sarees have been created for for Ms Jalota and her Myna ladies to wear at the Royal Wedding.

Made of Varanasi silk brocade, Chanderi and organza, in pastel shades of pale blue, pale pink, light grey and peach, the staple six-yard will be embroidered with Indian motifs such as the Chand Buta (crescent moon), marigold flowers for their significance in an Indian weddings and a troop of monkeys, to celebrate vigour. 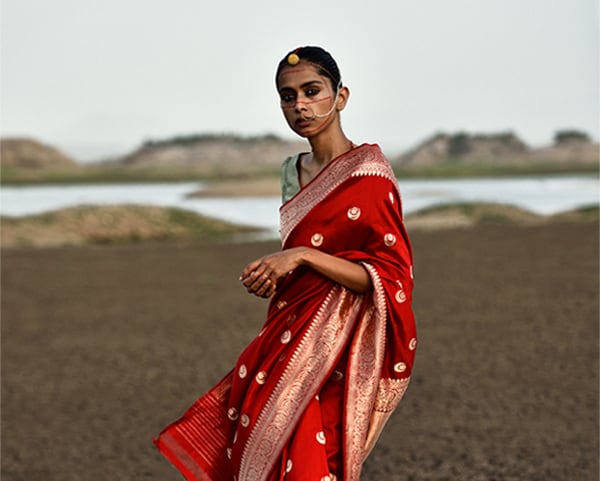 "The saree is a symbol that is rooted in culture, heritage and history; and with a diverse use of colour, textile and motifs, the sarees will showcase India's diversity," Sanjay Garg, whose creations are regularly worn by stars such as Deepika Padukone, told Vogue.

Suhani Jalota's Mahila Myna Foundation works to promote menstrual hygiene. In 2016, Ms Jalota gave an acceptance speech at the Glamour College Women of the Year Awards - in the audience was Meghan Markle who was, as Ms Jalota later learnt, greatly moved by her foundation's cause and work.

"She reached out a few months later to come to India and see our work, and voila, last year she was here at Myna. Ever since, she's been a great guide for us and the work we're trying to do," Suhani Jalota told Vogue.

Meghan Markle, an actress best-known for her work in TV show Suits, and Prince Harry will marry at St George's Chapel in Windsor Castle on Saturday.