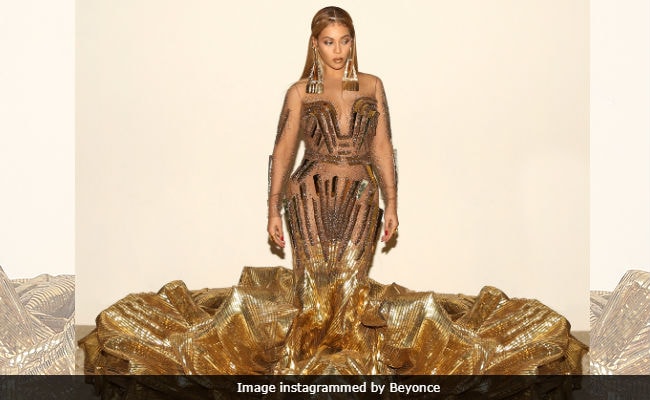 Seen the Knowles-Carters lately? They showed up en famille at the Wearable Art Gala in Los Angeles last Saturday to receive two humanitarian awards - one for Beyonce and one for her mother-in-law, Jay-Z's mom Gloria Carter. Dressed in gold, Beyonce looked much like an award trophy herself, matched by a miniature version in the form of 6-year-old daughter Blue Ivy. The event's theme was Wakanda, the fictional African country to which superhero Black Panther belongs, and Beyonce was accordingly kitted out in a metallic dress with panels mimicking the armour worn by Nubian armies, ending in yards of gold fabric that pooled around her feet, making Beyonce look like a more exotic version of Venus rising out of her giant oyster shell.

Check out the circumference of that gold train:

Guess who made Beyonce's dress? Indian designers Falguni & Shane Peacock, who customised the one-of-a-kind piece for the pop star:

Falguni Shane Peacock (@falgunishanepeacockindia) create a custom gown for Beyoncé (@beyonce) for the #WearableArtGala. “The metallic cutouts are placed strategically to mimic the shape of armor, as worn by the Nubian armies,” said Falguni Peacock. The designers worked closely with Beyoncé’s personal stylist Marni Senafonte to create the gilded look.

Beyonce's young daughter Blue Ivy Carter was almost as shiny and sleek as mommy in a dress made of gold fabric strips, crowned by a Cleopatra-like headdress.

Between the two of them, they outshone Jay-Z by a few million watts.

But that was just fine because Jay-Z was there in a strictly supporting role. Beyonce's award was introduced by a video message from Michelle Obama. The Hollywood Reporter quotes Mrs Obama as saying, "Because millions of girls around the world love you and admire you, including my daughters, it means even more that they see you standing up for others, using your amazing platform to fight for equity, justice and fairness for all. I love you. I am inspired by you."

Beyonce was given the award by her mother and said that she was a little uncomfortable being awarded for her charitable work because she was taught that the work itself is reward enough. "There's something that feels very off about receiving this award from my mother. She raised me to believe that giving is not an option, but a privilege and a responsibility. I try to keep my charitable work quiet, because I thought these things should come from the goodness of your heart and not from anything orchestrated as a campaign," she said, according to The Hollywood Reporter.

Meantime, this gold Africa-inspired look isn't the first time Beyonce has worn such an outfit. Remember her performance while pregnant with twins at the Grammys in 2017? Beyonce in gold - yay or nay? Tell us what you think in the comments.