The verdict on her second look is out

Ever since the beginning of this year's Cannes Film Festival, we've been keeping our eyes peeled for newly married Sonam Kapoor's appearance. Not only is she Bollywood's reigning fashionista, Sonam is also a seasoned professional on the Cannes carpet. When she did finally arrive on the French Riviera, disappoint she did not.

Her first look, a shimmering white Ralph and Russo lehenga got love for its international appeal with an Indian heart. Her next few outfits; a playful printed Delpozo number, a crisp white shirt with jeans and a candy striped Emilia Wickstead suit, hit all the high notes. Hell, even her airport ensemble which was replete with polka dots and accented with black accessories didn't fail to deliver.

So as you'd imagine, the bar was set high for Sonam's second red carpet appearance at Cannes. For it, she wore a dual toned Vera Wang gown with a fitted bodice and voluminous tulle skirt, both in earthy beige. At the back, the gown took a new form with floral applique at the back of the waist and a bright yellow train flowing till the end. Sonam kept accessories to a minimal and paired the outfit only with a pair of Chopard earrings. 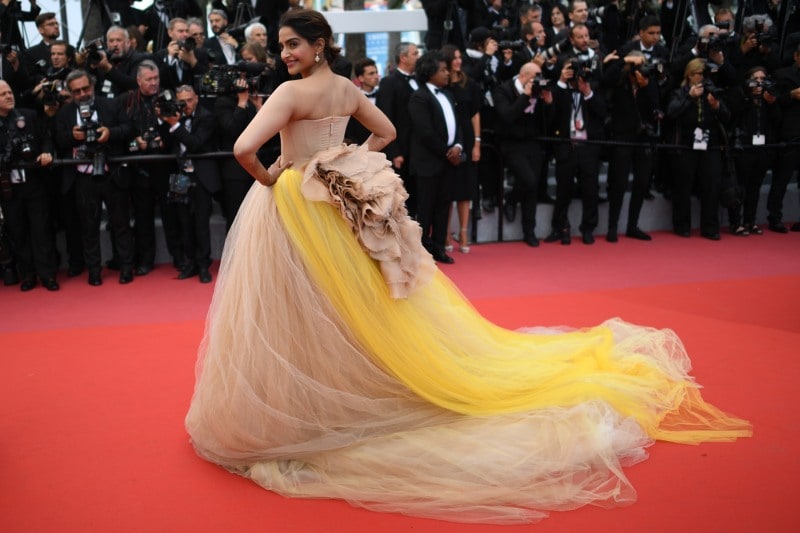 Complementing the ensemble was a beauty look that was bold yet worked hand-in-hand with it. Sonam wore shimmery gold eyeshadow with bright yellow on the inner area. Along with it, large lashes and pink toned lips. Finishing it off, her hair in a messy low bun.

So did Sonam's pastel toned tulle gown and punchy makeup look live up to the sky high expectations we had from her at Cannes? Yes, they did...at least mostly. So far, most of our Bollywood star's appearances have been filled with strong colours and striking cuts. Sonam's was a world apart and exactly what we were looking for. With its gentle palette and full form, it was the pinnacle of breezy summer chic. True to Sonam's fashion forward style, the pop of yellow and floral detail only further added life to it. While we could have done with a less creasing train, Sonam's look was a fine mix of subtle and statement making, in its own sophisticated way. Yet another successful Cannes run for Sonam Kapoor - looks like double celebrations are in order.