Cannes 2018: Sonam Kapoor, Deepika Padukone And The Power Of Jeans And A White Top

Between all the high fashion and big gowns, Deepika Padukone and Sonam Kapoor found a way to make simple and minimalistic seem glamorous 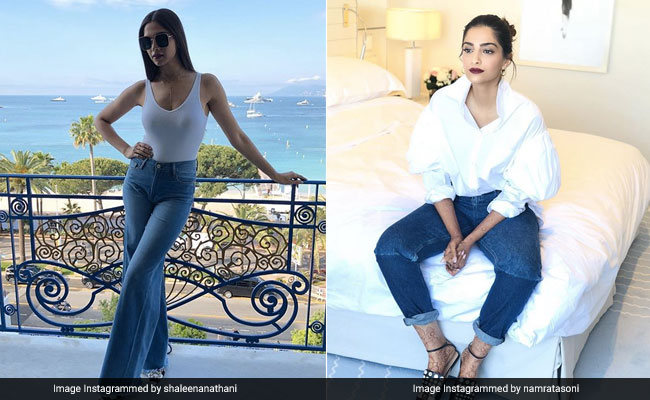 The Cannes Film Festival 2018 is nearing its end - and much like every other year, it's been an exciting fashion ride for those of us watching from afar. This year has been particularly exciting for Indian female actors at Cannes. From Deepika Padukone to Kangana Ranaut to Aishwarya Rai and now Sonam Kapoor, some of India's biggest female stars graced the red carpet at Cannes this year. Of course, Cannes is a place of high fashion and the red carpet at the film festival is always replete with celebrities wearing the finest designer clothes. The inordinate yet glorious garments seen on that red carpet have a way of turning even those least interested into fashion enthusiasts - and that is saying something.

But between all the high fashion and big gowns, some women find a way to make simple and minimalistic seem glamorous. Namely, some women like Deepika Padukone and Sonam Kapoor.

Deepika and Sonam both had their red carpet moments, complete with their gargantuan and vivacious outfits at Cannes this year. Before they took the red carpet and made heads turn, though, they each chose to wear an outfit that was simple, chic and above all, just so comfortable and easy to wear. It's something we all love to wear - blue jeans and a white top. Yes, that's right. Our beloved blue jeans and white top.

Who would've thought Deepika and Sonam would have opted for something as basic as this at Cannes. Now that they've worn it, maybe not so basic after all.

Sonam shared some pictures of herself this afternoon in a white oversized shirt from Simone Rocha and two toned cropped blue jeans from Bhane. She chose to pair her outfit with black studded mules from Sergio Rossi. We love how Sonam's mehendi from her very recent wedding is still bright and shining on both her hands and feet. What we love even more is that Sonam is making no effort to conceal it, even with her western ensembles.

Sonam's hair was tied in a simple bun and her makeup was kept minimal too. She went for full lashes and red lips. Doesn't she look stunning?

Just a few days ago Deepika Padukone was in Cannes as the brand ambassador for L'oreal too. Representing L'oreal is not the only thing Deepika and Sonam have in common. Seems like their personal style choices are also similar. Before walking the red carpet, Deepika had also shared pictures in her chic attire - jeans and a white tee - on both the days that she was there.

Have a look at what Deepika had worn.

Here's a major lesson from Bollywood's most fashionable in how to ace a basic attire. Deepika and Sonam have also made a solid case for minimalistic fashion - we love it.