Cannes Film Festival: Tamannaah Bhatia made heads turn as she made her Cannes debut in a black and white Gauri and Nainika gown 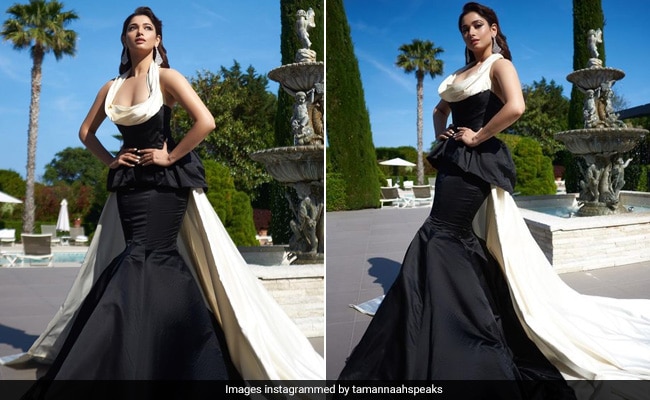 It is time for the fashion fanatics to get hooked to their screens as Cannes Film Festival 2022 officially begins! And with that being said, the red carpet is back as well. Held in Cannes, France, the glitzy event witnesses one of the most glamourous and fashionably elaborated red carpets. Witnessing an array of global stars from across the world, the event is one of the glitziest film festivals on the circuit. Celebrities are channelling some new level energy as they get back or make a debut at the red carpet this year. And among many Hollywood and Bollywood celebrities walking the carpet was Indian actress Tamannaah Bhatia who made her Cannes debut in a dramatic and stellar white and black ball gown.

In a Gauri and Nainika number, actress Tamannaah Bhatia was a vision in her beautiful debut attire. Styled by celebrity stylist Shaleena Nathani, the actress kicked off in grand style. The Baahubali star adorned a body-hugging gown. The ensemble featured a dramatic flair towards the hemline which made the fit all the more flattering. The long train accentuated her style. Her choice of open tresses and minimal jewellery made it an absolutely stand out look.

In yet another striking number, Tamannaah Bhatia was seen adoring a green pistachio pant suit paired with a lavender corset, redefining summer aesthetic at Cannes in the best possible way. The actress aced this easy breezy yet stylish outfit as she striked a pose. She accentuated the look with complementing makeup and striking gold-toned earrings which single-handedly notched up the ensemble.

She paired the stunning blazer with chic straight fit pants and her lavender corset perfectly went well with the look. With tied tresses, she kept it simple, subtle and elegant, giving us major summer fashion goals.

Bollywood celebrity Deepika Padukone was among the Jury members who walked the carpet. She adorned Sabyasachi as she graced the carpet with her presence. Actress Urvashi Rautela was also spotted at the event in a dramatic white gown by Tony Ward as she made her debut at Cannes 2022.