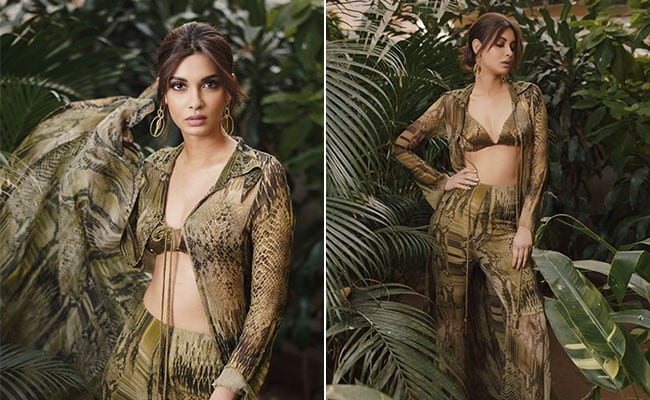 Diana Penty leaves our jaws open and dropped to the floor

Diana Penty occasionally diverts our attention to her Instagram profile. For fashion, beauty, and anything in between, Diana Penty's Instagram is full of those. This time Diana makes us fall head over heels for the green co-ord set she wears. The three-piece python print co-ord set from designer label Nikita Mhaisalkar included a strappy bralette with tie-knot detailing at the front, a pair of relaxed fit pants, and a full-sleeved collared cape which she carried over her shoulders. A pair of golden hoops were her only accessories, Tying her tresses in a messy bun, the actress wore minimal glam makeup with kohl-laden eyes, shimmering eyelids, well-contoured cheeks, and a brownish lip tint.

While welcoming the New Year, Diana Penty looked absolutely fantastic in a blue minidress which featured dramatic puff sleeves, a button-down front, and a gorgeous natural sheen with floral prints in darker tones all over. The thin waist belt added a chic glam to Diana's monochrome outfit. The actress picked a pair of silver metallic boots to add contrast to her monochrome look. A pair of dangling stud earrings and statement rings were the only accessories that Diana wore.

Also Read: We're Chained To Our Screens And That's All Because Of Diana Penty's 10 Kg Chain Jacket

Diana's versatile sense of style ranges from cottage to militarycore. The outfit included an oversized pair of cargo pants and a full-sleeved half jacket which the actress wore with a black tube bralette. She kept the sporty look alive by wearing a pair of white sneaker earrings. Her tresses were tied in a messy bun with a few strands left loose to complete her casually chic style.

Diana Penty's versatile style can be seen from end-to-end on her uber-chic Instagram profile if you care to take notes. You can thank us later.