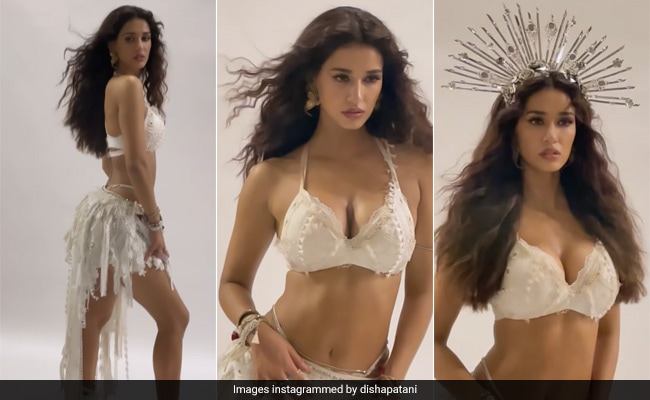 The Filmfare Awards is often termed the Oscars of Bollywood and the spectacle that it usually is, it is hard to sort of disagree. Award nights aren't just a celebration of films but of fashion too and celebrations call for some dancing and jiving. Disha Patani was going to settle for nothing less than the tunes of her peppy beats and groovy tunes and got to the stage of the prestigious awards show to get the party started. Many say that she's in her Doja Cat era and we're starting to see why. For her performance at the Filmfare Awards 2022, Disha Patani left many in shreds not just with her moves but also with her choice of fashion. A white bralette and ripped white skirt added to her daringly chic avatar. Her hair was kept in voluminous mermaid waves and a headrest of a true blue goddess. Her soft metallic lids and glossy lips added to the magnificence of her chic outfit that could make anyone break into dance.

She can't stop dancing when she is at her happiest. And we know for sure where she finds peak happiness - at the beach. To nobody's surprise even when she is twirling and swirling at the beach with a smile that could make the world go round with her, it is in fact a white skirt co-ord set that comes to her rescue. What if that's the secret behind her happiness after all?

Disha Patani is a performer not just on the dance floor but also for the eyes. Retro vibes with shimmer and shine on stage looks better when Disha Patani gets groovy in shades of pink sheer and sheen.

Also Read; Disha Patani Can't See Us From Up Above After Raising The Ethnic Style Bar So High With Her Lehenga

To break into a dance or anything else, Disha Patani has a fitting outfit for it all.

Also Read: Disha Patani Is A Solid Ten On The Style Charts With Her Stylish Black Dress