Emily Ratajkowski Made A Fashion Statement Even At Her Wedding

You won't believe what she wore to get married in 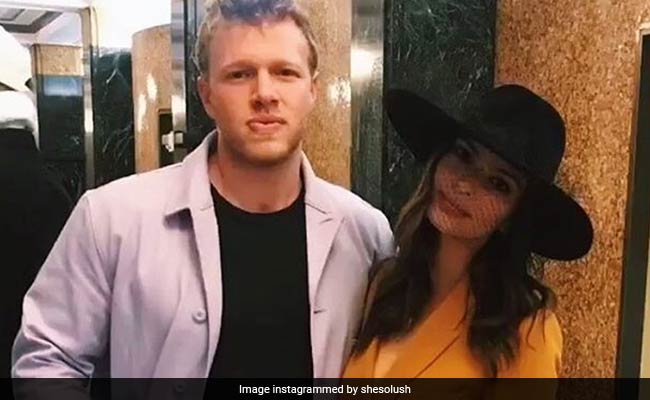 The newlyweds Emily Ratajkowski and Sebastian Bear-McClard (Image Credit: She So Lush)

Over the weekend, Hollywood actress and model Emily Ratajkowski who is known more for her Twitter clapbacks, got married. The series of events, from the sudden announcement to the courthouse ceremony caught fans by surprise but what was even more surprising was her choice of wedding outfit. While you'd expect a bride to be spotted in a lace-adorned white gown and sparkling stilettos, Emily Ratajkowski took a different turn and chose to make quite a striking style statement on, what else but her wedding day.

At her courthouse wedding, she wore a double-breasted mustard Zara blazer with a waist sash and matching flared trousers. To give the unconventional look a traditional touch, Emily wore a black wide-brimmed hat with a veil over her face. While we're used to seeing Emily's risqué photoshoot pictures take up most of her social media profile, it came as a pleasant, unconventional surprise to see her don a bright toned relaxed pantsuit for her wedding ceremony.

If Emily's wedding outfit looks all too familiar to you, it's because Sonakshi Sinha wore almost the same outfit last week for movie promotions. While our girl Sonakshi obviously forfeited the veil for straight, pulled back hair, she also keep the blazer full-sleeved and paired it with minimal jewellery.

Emily married Sebastian Bear-McClard, a Hollywood producer at the City Hall ceremony after dating for a couple of weeks, according to Seventeen. The groom chose an equally low-key ensemble of a lavender casual suit with a black t-shirt. The Instagram announcement that followed got congratulatory messages from her fans as well as several double taps for her unique bridal look.

Following their subdued ceremony that was devoid of cakes, dresses and cameras, the newlyweds were spotted together for the first time post their wedding in New York. While Emily wore yet another pantsuit, this time in a leopard print; Sebastian went for a comfortable tracksuit with boots.

Looks like every celebrity wedding needn't be week-long affairs with starry guests and designer gowns. Our congratulations to the happy couple!