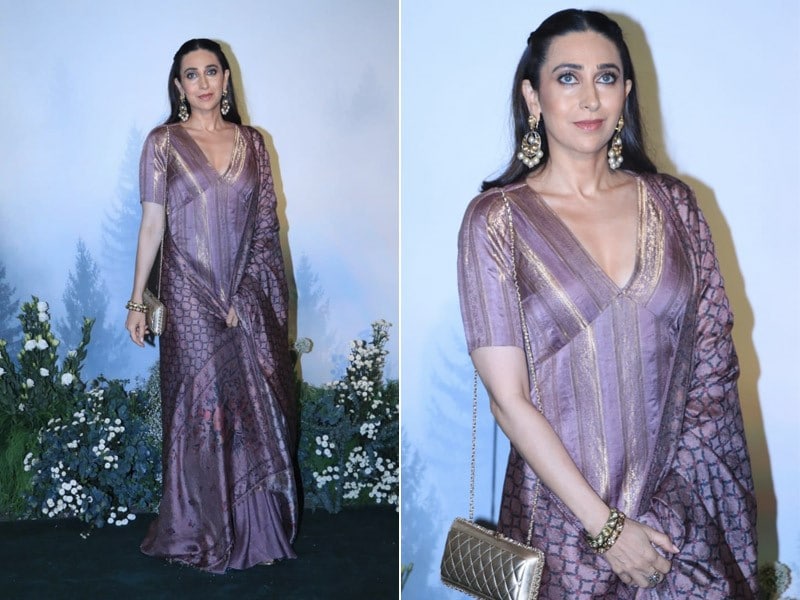 Arpita Khan's Eid party witnessed some renowned faces in Bollywood in attendance. The celebration was an elaborate affair with the Bollywood celebrities making fashion statements in glamorous ethnic outfits. Karisma Kapoor attended the party in an exquisite ethnic piece in mauve colour. The silk kurta in mauve had golden work and a plunging neckline. She paired it with a salwar in the same shade and teamed it with a heavy work dupatta in mauve and gold. The actor picked golden statement earrings with dangling pearls, golden bangles and a golden clutch purse to accesorise the outfit. Karisma's neatly twisted braids on the sides and beachy loose hair went well with her ethnic attire. While talking about Karisma Kapoor's ethnic wardrobe we cannot not mention her all-white chikankarianarkali from designer Punit Balana. The chanderi silk anarkali had intricate coin embroidery throughout. The actor paired the anarkali with a plain churidar and organza dupatta in the same colour shade. Tying her hair in a neat bun, Karisma opted for nude makeup with pink lip colour. She picked a pearl choker necklace, pearl earrings and golden mojaris to complete her look. Bollywood celebrities from Sara Ali Khan to Shraddha Kapoor have also shown us some stunning anarkali sets in the past.

Karisma Kapoor has an appealing taste in ethnic wear. She opted for a swoon-worthy all-black saree from Sabyasachi. The striking black drape had intricated floral embroidery at the borders and embroidered motifs throughout with sequin details. The diva paired the gorgeous saree with a shimmering spaghetti blouse in black. The backless blouse had a plunging neckline and sequined detailing too. The actor tied her hair in a neat bun and wore dangling earrings. Karisma's nude makeup, kohl-laden eyes, ample mascara and matte lip colour perfectly complemented her all-black dazzling attire.

Also Read: Karisma Kapoor's Blue Swimsuit And Trendy Sunglasses Are Prepping Us For The Summers