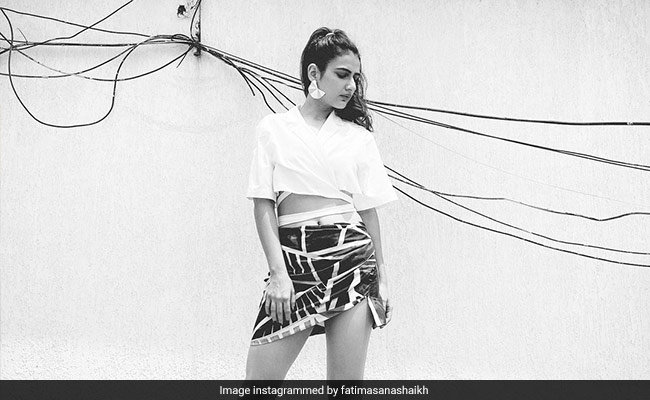 Actress Fatima Sana Shaikh knows just how to set Instagram on fire with her fashion choices. The actress who is basking in the success of her new Netflix anthology, Ajeeb Daastaans, has been winning the fashion game lately. For the film's latest virtual promotion session, Fatima chose to impress her fans with a stunning Western look. She was seen keeping it classic with a crisp white crop top, which was paired with an asymmetrical printed mini skirt with a cut on one side. The black and white number from Zara was complemented with ankle-length leather boots. She tied her hair up in a ponytail, keeping her summer outfit fuss-free.

The images of Fatima Sana Shaikh's look received more than 96,000 likes on Instagram overnight. Made In Heaven actress Sobhita Dhulipala commented, "Hot stuff Ms Shaikh." Meanwhile, her impressed fans dropped positive feedback in the comments section. One user wrote, "Gorgeousness at its peak." Words such as "fantastic" and "awesome" were used to describe Fatima's sartorial pick.

The 29-year-old Bollywood actress recently also treated us to a fresh look in a pretty summer outfit. She wore an off-shoulder summer dress with a plunging neckline. The dark blue and white printed ensemble from The Jodi Life had a flowy structure. Sticking to the 'less is more' concept, Fatima tied a simple low ponytail and chose a no-makeup makeup look.

But we must admit that we are partial to Fatima's Indian looks. Recently, the Dangal actress looked ethereal in a pink and white organza saree. It was decorated with a hand-painted design and hand-embroidered gota work. She paired the saree with a pale pink sleeveless blouse.

Fatima is also not afraid to go bold with colours. She proved this when she wore a red co-ord set recently. She added the right amount of oomph factor with a dash of deep red lipstick. In the caption, the actress confessed, "Safe to say, red is my favourite colour."

Fatima definitely has enthralled us with her chic style statements. Did you save your favourite look of hers?