For Navya Naveli In A Breezy White Dress, Summer Is Not Too Far Gone

How we adore a fuss-free look like Navya Naveli's that is so very easy to put together for ourselves!

We revel in the season of summer for its effortlessly breezy fashion, which means a heart wrenching feeling follows when the months transition. But if you're Navya Naveli, you don't have to let go of it just yet. As long as your closet allows you to hang on at least. In her post on Instagram, the star kid and entrepreneur is seen in a sleeveless white tiered midi dress that is perfectly crafted for a summer day spent wandering on the hills. Navya's incredibly chic and minimal sense of style made sure that she accessorised with a light hand; only a beaded necklace and bracelets were seen with it. Her choice of footwear included metallic sandals. How we adore a fuss-free look like Navya Naveli's that is so very easy to put together for ourselves! 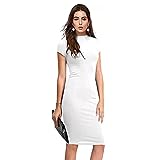 It seems like white just might be Navya's favourite colour. Previously she showed us how she could have fun with colour when she paired patterned yellow pants with a simple white t-shirt.

And when trends were left behind her, she could tackle fashion staples just as easily. We won't forget her crisp white shirt which she wore belted with straight fit blue jeans and loose waves in her hair. Doesn't she look just incredible?

Another day, another white t-shirt for Navya. This it was a sleeveless white button-down vest which she wore with blue jeans.

(Also Read: Navya Nanda Makes A White Shirt And Jeans Look Like The Most Chic Picks Around)