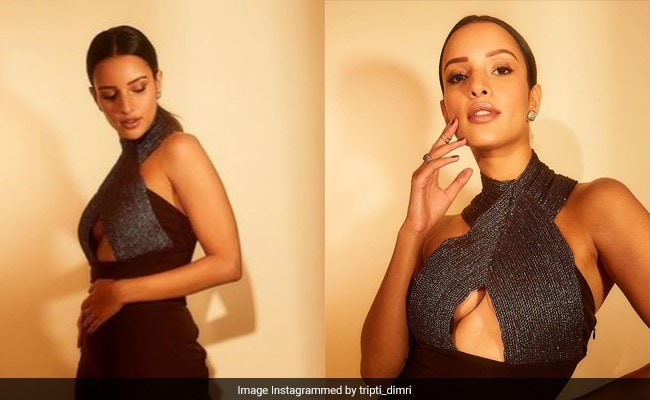 Tripti Dimri is currently awaiting the release of her film, Qala. The film, which marks Irfan Khan's son Babil Khan's debut, will stream on Netflix, from December 1. Tripti is currently busy promoting Qala as well as dishing out some fashion inspo. The actress shared a slew of pictures on Instagram, looking nothing less than a diva.  Tripti picked a chocolate brown micro dress, which came with halter neck cording and asymmetrical hemline. The outfit was from the shelves of Prreeti Jaiin Nainutia's brand Nir Mooha. While she wore diamond studs for accessories, her choice of footwear was a pair of silver heels. Tripti tied the straightened locks in a low-rise pony. And for makeup, she opted for shimmery brown eyelids, mascara laden eyes, highlighted cheeks, and a glossy brown lip.

Also Read: Tripti Dimri Gets Us In The Party Mood In Her Silver Sequin Backless Gown With A Slit

In case you thought film promotion outfits are restricted to ethnic wear, dresses and gowns, Tripti Dimri is proving you wrong in these pictures. Keeping it chic and casual, she teamed a full-sleeve, high-neck colourful top with denims. Her pants came with side slits, which lent some drama to her simple look. Glass heels, straightened open hair, and a glass glow makeup was a match for her outfit.

Tripti Dimri carries traditional clothing with utmost grace. And, here is proof. The actress slipped into an off-white churidar set, which included a full-sleeve kurta and churidar. To compliment the outfit, she picked a velvet purple dupatta, featuring silver work all over. A pair of traditional silver danglers, kohlapuri jutti, and top-notch glam game rounded off her ethnic look.

Also Read: A Classic LBD Trumps All Styles For Tripti Dimri In Her Stylish Look

Tripti Dimri channels her “cotton candy love” into a saree. She teamed the baby pink organza saree, from Raw Mango, with a sleeveless white blouse. With her hair tied in a bun, Tripti opted for glowy skin and a pair of diamond studs. Isn't she a natural beauty?

Clad in an embroidered white drape, Tripti Dimri shines brighter than a diamond. The actress teamed up her gorgeous saree with a strappy bralette-style sequin blouse. She completed her desi girl look with a pair of diamond earrings, and glamorous makeup.

Just like her acting chops, Tripti Dimri never fails to impress us with her sartorial choices.

Also Read: Tripti Dimri Sums Up A Stylish Indian Summer In A Printed Kurta And Jhumkas