Jasmin Bhasin and Aly Goni are a fun and stylish couple, something that also reflects in their clothing choices 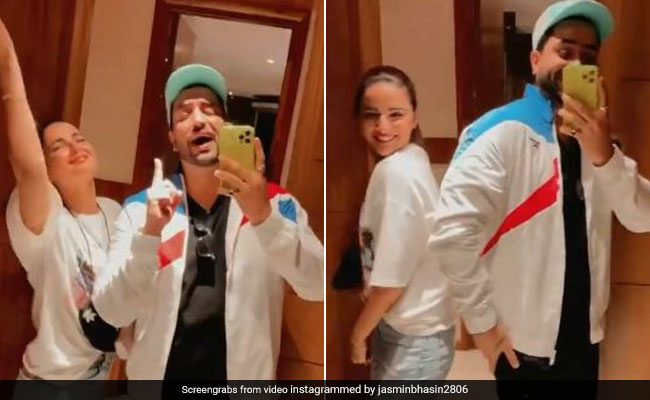 Jasmin Bhasin and Aly Goni are back (Image Credit: JasminBhasin2806)

TV actors Jasmin Bhasin and Aly Gony, who fell in love during their time together in the Bigg Boss house, have been giving their fans couple goals. The two often post videos together and have aced couple style almost every time. Jasmin and Aly are a fun and stylish couple, something that also reflects in their clothing choices. Their couple style is casual and attractive. Jasmin and Aly's music video together titled Tu Bhi Sataya Jayaega released recently and the couple has already made a funkier version of the same. In the short video shared on Instagram, both of them are dressed in jeans and shirts. Aly can be seen donning a jacket matching Jasmin's shirt while the two are making funny gestures in the video.

(Also Read: Jasmin Bhasin's Cool Outfit Is A Golden Hour Essential Even In A Desert)

When the poster of their music video was released, Jasmin posted a picture taken from the sets of the song where the couple looked endearing in traditional dresses. Aly wore a half jacket with floral prints and a green shirt while Jasmin was dressed in a pista coloured anarkali suit.

Their couple style is not just fun but also fiery as evident from this picture shared by Jasmin from their vacation together. While Aly wore a bandana wrapped around his head with a printed shirt and jeans, Jasmin aced the casual look with sneakers, hoop earrings, white t-shirt and a pair of black shorts.

Aly shared an adorable picture of the couple from the time when the two celebrated the festival of Holi. While Aly went for the casual look with a white shirt over his tee, Jasmin wore a white dress with floral patterns.

Another picture of the couple shared by Aly is from their family vacation. Aly can be seen wearing a dark grey coloured sweater with black jeans while Jasmin paired a red jacket with grey sweatshirt and donned blue jeans.