Ahead of the festive season, Kriti Kharbanda is dropping cues to put best sartorial foot forward. 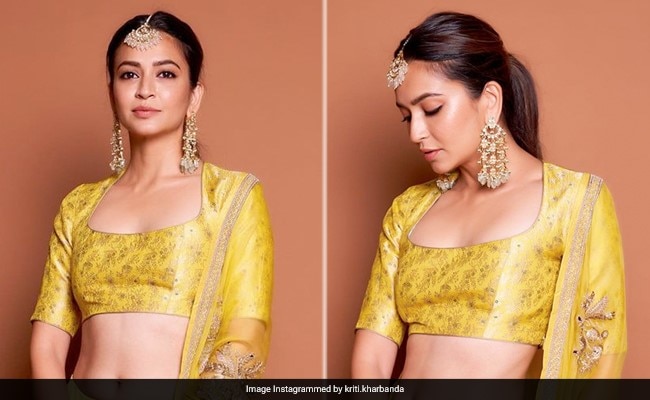 Kriti Kharbanda in a lehenga is sunshine on a rainy day

It's raining outside but Kriti Kharbanda is radiating sunshine in this stunning yellow ensemble. Ahead of the festive season, the actress is dropping cues to put your best sartorial foot forward. And, we are totally loving it. Kriti wore an elbow-sleeve blouse, which features a scoop neck design and golden print design. She paired it with a solid yellow skirt as well as a mesh dupatta, which came with a golden gotta border and floral designs. Kriti paired a pair of statement golden earrings and a maang tikka. Her glam game was top notch with bronzed and highlighted cheeks, pink hue eyeshadow and lip. Her tresses were centre-parted in a low-rise ponytail.

We clearly can't take our eyes off Kriti Kharbanda. She paired a statement blouse with a muddy green skirt, featuring stunning red embellishments. Ditching all other accessories, Kriti only wore a maang tikka. Do we have to mention that her makeup was on point? And her tresses were left loose.

The actress blew us away with her stunning looks in this pastel pink saree. Kriti Kharbanda wore a pink and white stripe-print saree. She teamed it with a dark pink blouse, which came with silver embellishments and a risky neckline. There was a touch of pink hue in her makeup as well. For accessories, she picked a subtle pair of silver earrings. Is it just us or were you also reminded of candy floss?

Kriti Kharbanda's ability to look absolutely stunning in almost every ensemble has bowled us over. Here, the actress wore a red blouse with heavy golden work and paired it with a similar print skirt. Accessories? Statement neckpiece and bangles. Makeup? Winged liner, contoured cheeks, and a red tint on lips. Her manes, in soft curls, were tied in a messy pony with a few strands flowing down her face.

What a beauty. Kriti Kharbanda is graceful as ever in this white saree, which came with a wide golden gotta work on the border. Big crystal studs, and a statement white and golden maang tikka only accentuated her look. Blushed cheeks, kohl-rimmed eyes, and mascara-ladden eyes rightly complimented Kriti's look. And just when the colour tones were being dominated by white and golden, she added a colour pop with her red lip shade.

Kriti Kharbanda, in these traditional ensembles, is straight out of our dream.

Also Read: Kriti Kharbanda's Monochrome Swimsuit Is A Beachwear Staple That We Need