Move over, devils and witches. Take a note from Harry Styles on how to make an impact for Halloween 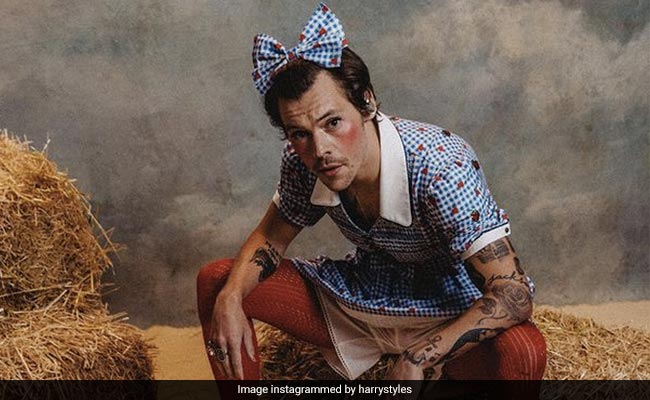 Harry Styles is a man who knows how to make an impact. If there's statement-making look, you know he's behind it. If there's a sartorial moment that blurs the lines between gendered fashion stereotypes, that sentence is bound to end with the name Mr. Styles. As was the case for Halloween 2021. Or as he called it 'Harryween'. For his spooky themed concert in New York, Harry dressed up as Dorothy Gale from The Wizard Of Oz. While it's a costume that is seen on rotation, it's a surprising and fresh twist when it's in the male department. Harry wore Dorothy's signature white and blue gingham print dress with red tights and blue socks topped with her trademark sequin ruby slippers. Only adding to the costume was a matching bow in his hair and rouge dotting both of his cheeks. Move over, devils and witches. This is how you make an impact on Halloween.

(Also Read: Richa Chadha And Ali Fazal Up The Vintage Drama In Time For Halloween 2021)

The Hollywood celebrity roundup for Halloween 2021 definitely was a long one. Part of our favourites list was Kylie Jenner. The pregnant star wore a black bodysuit with whiskers and ears to complete her kitty costume, which mom Kris Jenner also donned. Stormi Webster was a shimmery little mermaid while partner Travis Scott went as Michael Myers in a varsity jacket and mask.

Sophie Turner and Joe Jonas made a 2010s pop culture reference their own. While she dressed as Isabella, he dressed as Paolo from The Lizzie McGuire Movie which even Hilary Duff couldn't get enough of.

Over in our side of the world, Shilpa Shetty chose the spooky route as a ghoul in a white dress with white eyes, slashed skin and messy hair.