In Their Super Glam Looks, Anushka Sharma And Virat Kohli Certainly Do "Clean Up Well" 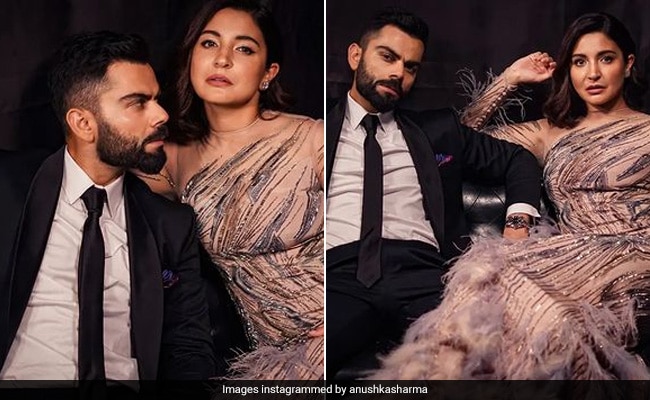 Anushka Sharma and Virat Kohli enjoy a massive fan following across the globe. Apart from being one of the most inspiring couples in the industry, the duo always manages to stop the fashion traffic with their evergreen sartorial choices. The two recently decided to pose for a photoshoot and leave the glam quotient soaring in their stunning outfits. Anushka wore a stylish full-sleeved gown adorned with feathers at the bottom and around the cuffs of her sleeves. She pulled off the look with minimal accessories. With makeup on point and her side-swept short hair, she looked like a stunner. Virat appeared dapper in a formal suit set. He wore a black blazer and matching pants paired with a white shirt beneath. Don't forget his stunning black tie.  She captioned it, "We clean up well."

Anushka Sharma and Virat Kohli look super amazing together even when they take the casual route in terms of fashion. On the occasion of New Year, Virat posted pictures and they looked perfect together. Anushka opted for a chic black and white striped dress that showcased tie-knot detailing in front and at the cuffs of her sleeves. Virat looked smart in a white printed tee and black jeans with large pockets.

Anushka Sharma and Virat Kohli have continued to send the Internet into a meltdown with their couple pictures in ethnic wear since they got married. Here's another sweet ethnic look from their fashion diaries that had us taking notes. Anushka was decked up in vibrant mustard yellow ethnic wear with embroidery and sequin work. Virat, who is seen hugging her, appeared cool and classy in a white kurta.

Anushka Sharma had shared a family picture wherein she was seen holding their little munchkin Vamika in her arms. Here, she looked elegant in a soft pink sweatshirt teamed with navy blue tights. Virat, who stood next to her, opted for an oversized casual tee and black pants.

Here's another picture of Anushka Sharma and Virat Kohli together that you must not miss. Anushka wore what appeared to be a gorgeous black kurti with colourful and intricate embroidery work done on the sleeves. Virat chose to go ahead with an oversized black tee.

Anushka Sharma and Virat Kohli know how to keep their fashion game on point come what may.