Inside The Vanity Fair Oscar Party: From Kendall Jenner To Miley Cyrus, Who Wore What

As the celebrities got out of their Oscar outfits and slipped right into their party outfits, the style quotient in this crowd went through the roof for a second time in a day 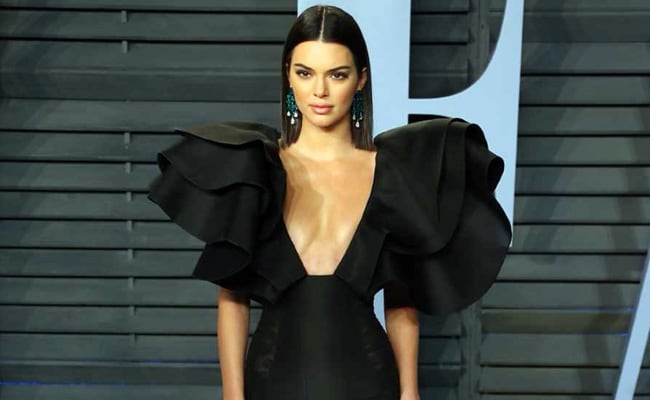 The biggest night for Hollywood, the Oscars, come and go in the blink of an eye. All that build-up of excitement over months, gone in just a few hours. Although, we have to say, it is entirely worth the wait. There seem to be two things most people look forward to at the Oscars. First and foremost the declaration of basically the best films of the year. And secondly, what everyone's wearing. Naturally, everyone's eyes are on the red carpet to see what some of the biggest celebrities in the business choose to wear to this glamorous night. After all, it is some of the most renowned names in the fashion industry that dress these celebrities in their finest creations. But like we said, this night of glamour and excitement comes and goes so fast. It's a good thing we have the Vanity Fair Oscar party to look forward to each year after the awards ceremony gets over, though. It serves as the perfect ending to one of the most anticipated nights of the year.

As the celebrities got out of their Oscar outfits and slipped right into their party outfits, the style quotient in this crowd went through the roof for a second time that day. Here are some of our favourite looks from the Vanity Fair Oscar party that took place post the Oscars yesterday in Beverly Hills, Los Angeles.

Model and reality TV star Kim Kardashian's sister, Kendall Jenner, showed us that she has some serious fashion game at the Vanity Fair Oscar party. Kendall hit the red carpet wearing a dramatic version of the little black dress from the fashion label Redemption. Her dress featured big ruffled sleeves and a plunging neckline. She kept her accessories minimal, wearing only a pair of sapphire and diamond chandelier earrings from Lorraine Schwartz. 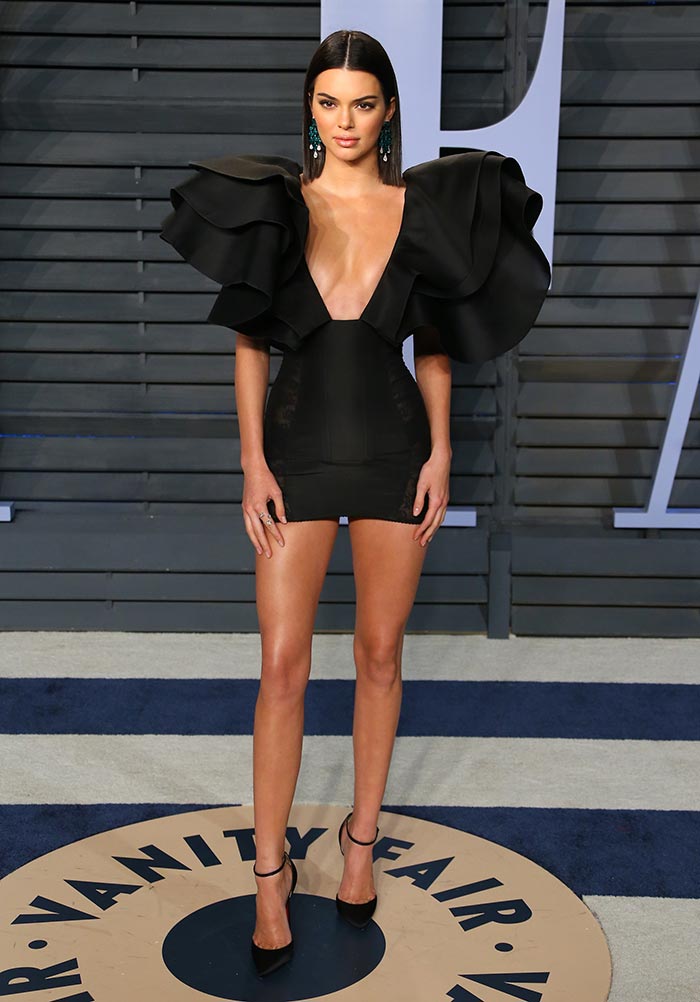 Emma Roberts looked stunning as she made her appearance in a vanilla chiffon dress from Prada. Her dress was embellished with sequin embroidery all over as well as opaline crystals. Emma kept her hair and makeup simple and only accessories with a pair of earrings. 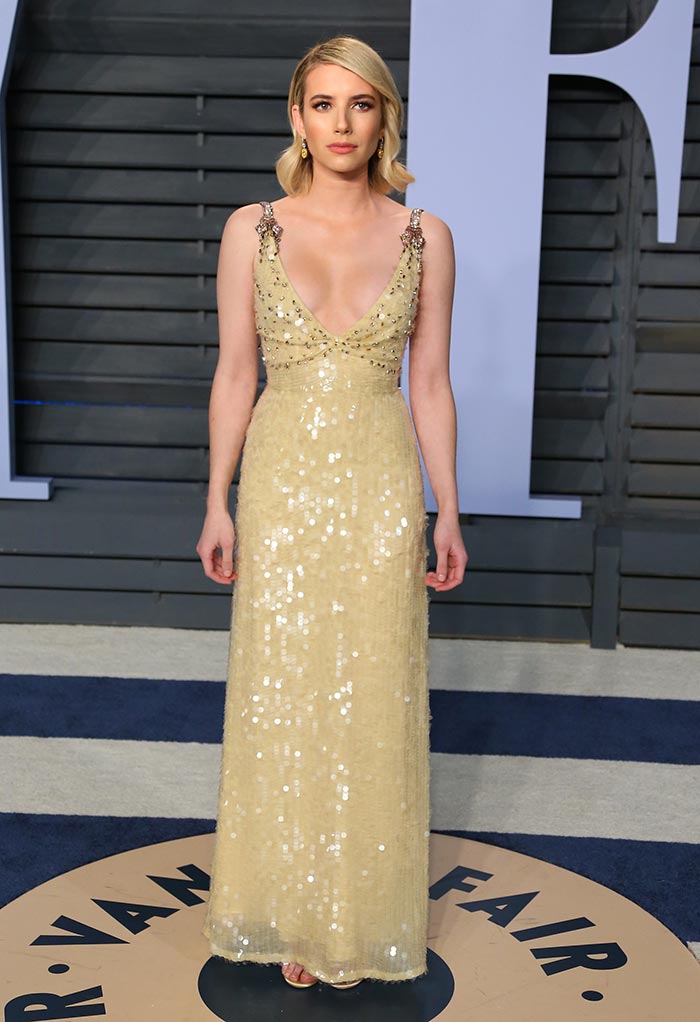 Miley Cyrus was a vision as she made her way to the party with her boyfriend and actor Liam Hemsworth. Miley wore a the black and ivory silk v-neck column gown from designer Prabal Gurung. Her gown featured a hand draped twist front and covered button detail. Liam was seen wearing a black and white tux. The world couldn't help but notice how happy and in love the couple looked. 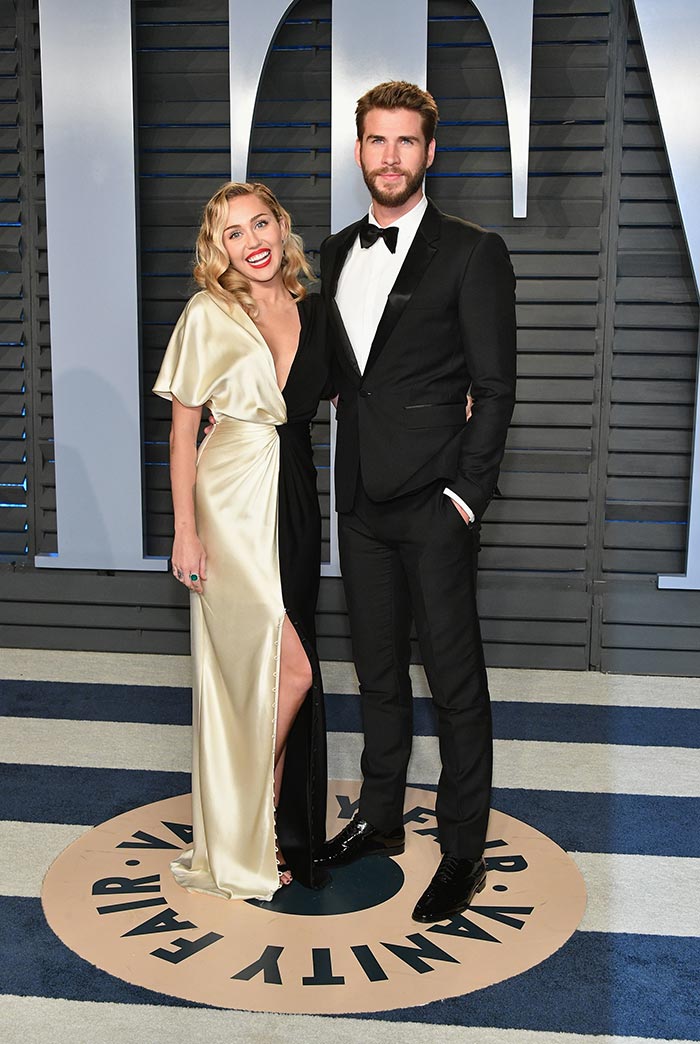 Paris Jackson, American actor, model and activist and the only daughter of late legendary singer Michael Jackson looked resplendent as she made her way to into the party. Paris chose to wear a green Atelier Versace chiffon net dress with crystal-embellishment details and front split. She tied her hair in a messy ponytail and chose to do a smokey eye look for her makeup. 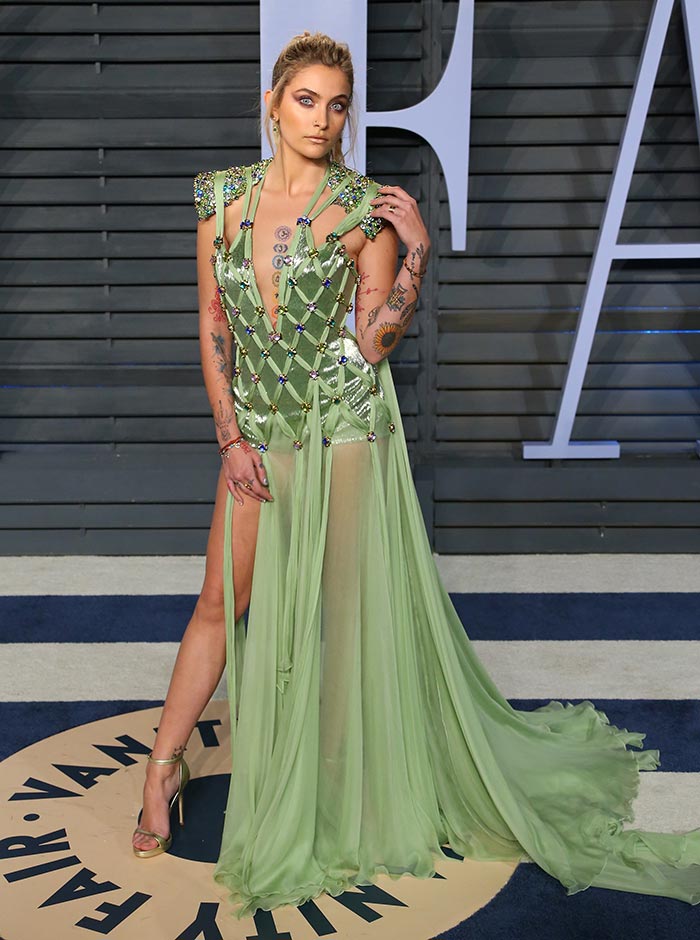 Lupita Nyong'o wore a beaded Giorgio Armani Privé gown to the Vanity Fair Oscar Party in LA. Lupita made a switch from her gold metallic gown by Versace that she wore to the Oscars but kept her hair the same by keeping her gold hair accessories still intact. 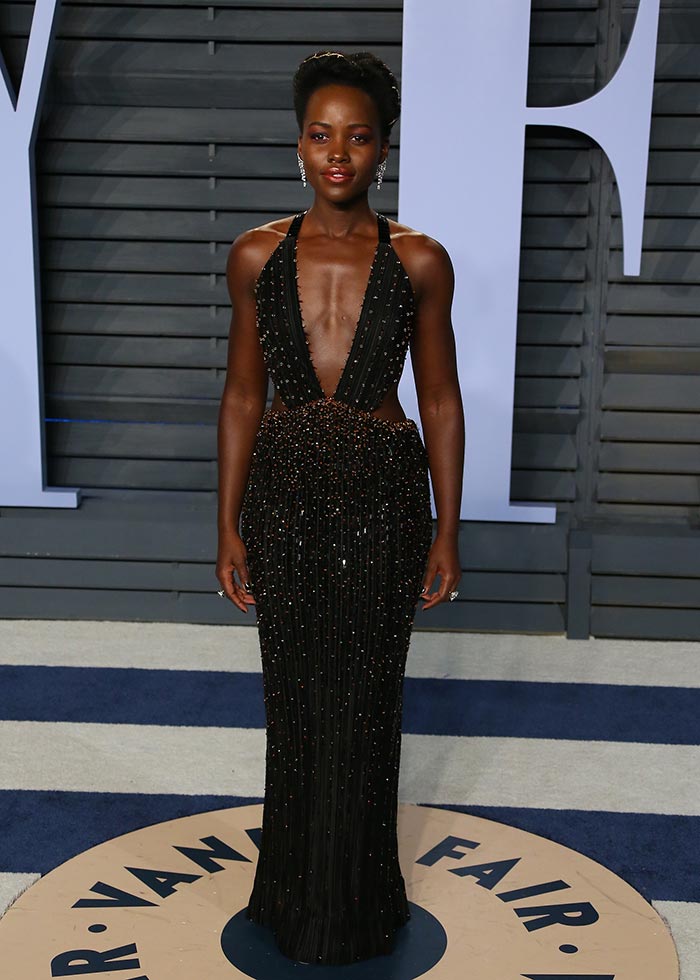 It was hard for Gal Gadot not to shine on the red carpet for the Vanity Fair Oscar party in a custom Giorgio Armani Privé gown. Gal's gown consisted entirely of crystals in the same colour as the gown. Much like her look from the Oscar red carpet, Gal kept her makeup simple, but added some more sparkle with a stunning Tiffany & Co diamond necklace. 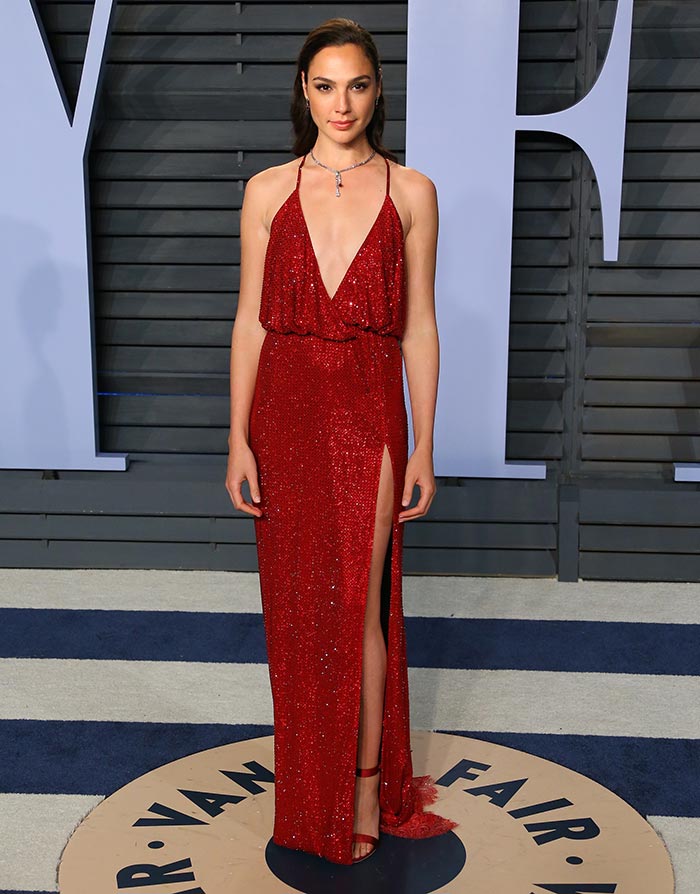 Mindy Kaling did not fail to impress in her Atelier Prabal Gurung navy gown. Mindy's gown was a hand embroidered sequin strapless number with a front slit and raw edge silk chiffon detail. Much like her colleagues, Mindy also went with minimal accessories and makeup. 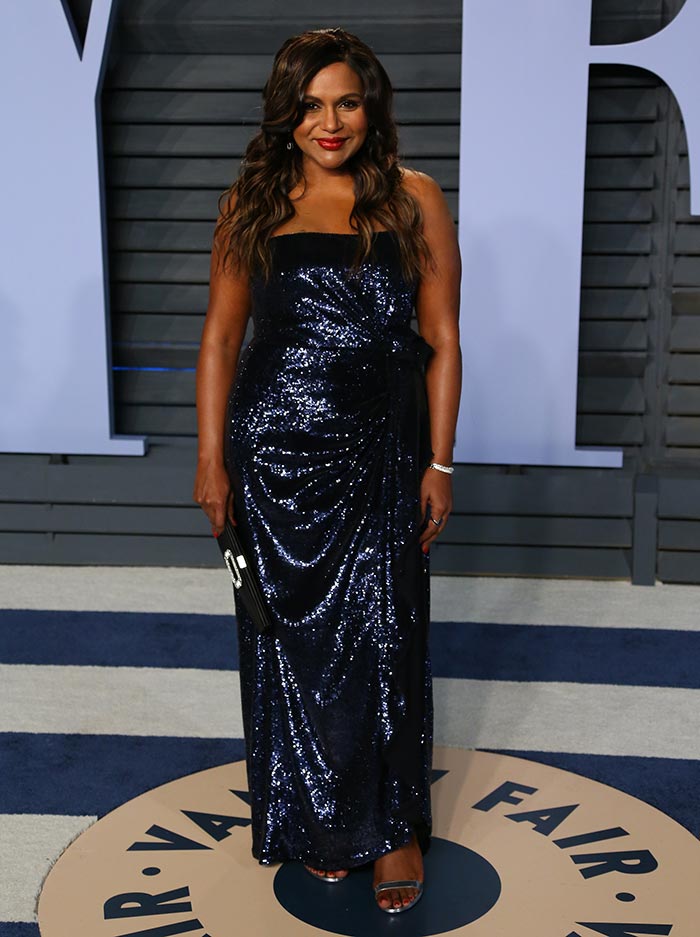 Victoria Secret's angel and Brazilian model Adriana Lima was hard to miss as she made her way in a custom made Alberta Ferretti strapless black silk velvet gown with a bow in black satin adorning the back of the dress. Black pointed pumps and a black clutch completed her look. 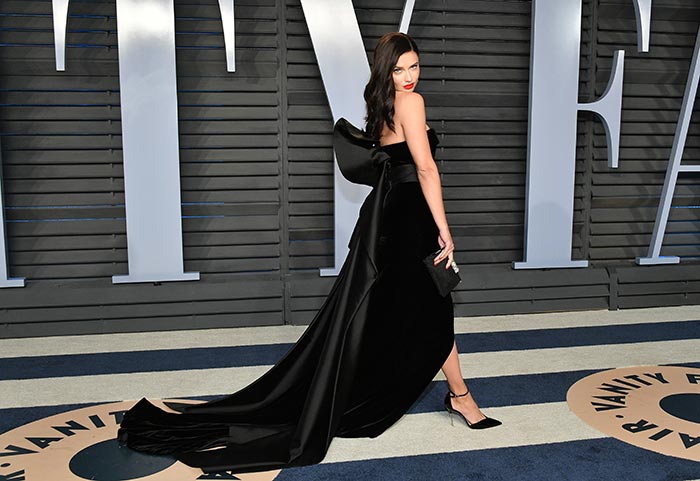 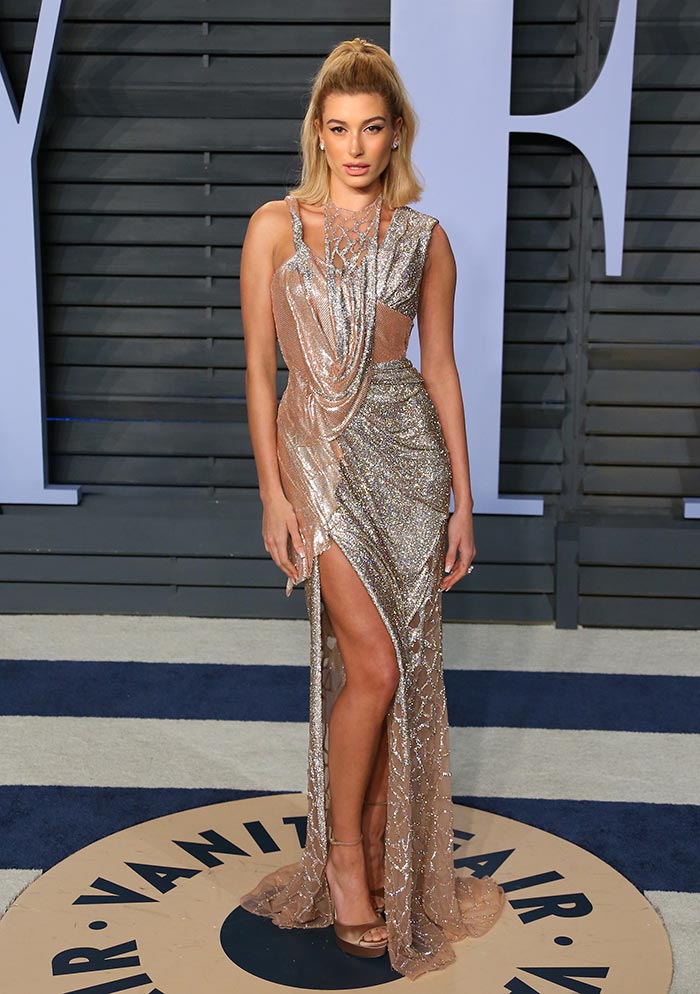 Zendaya's wardrobe change was as smooth as her red carpet appearance at the Oscars earlier in the evening. She wore a peach gold gown by Michael Kors at the Vanity Fair party. Her top bun and nude smokey makeup was kept the same as the Oscars through the outfit switch. She also continued to wear accessories from Bulgari as she did for the awards ceremony. 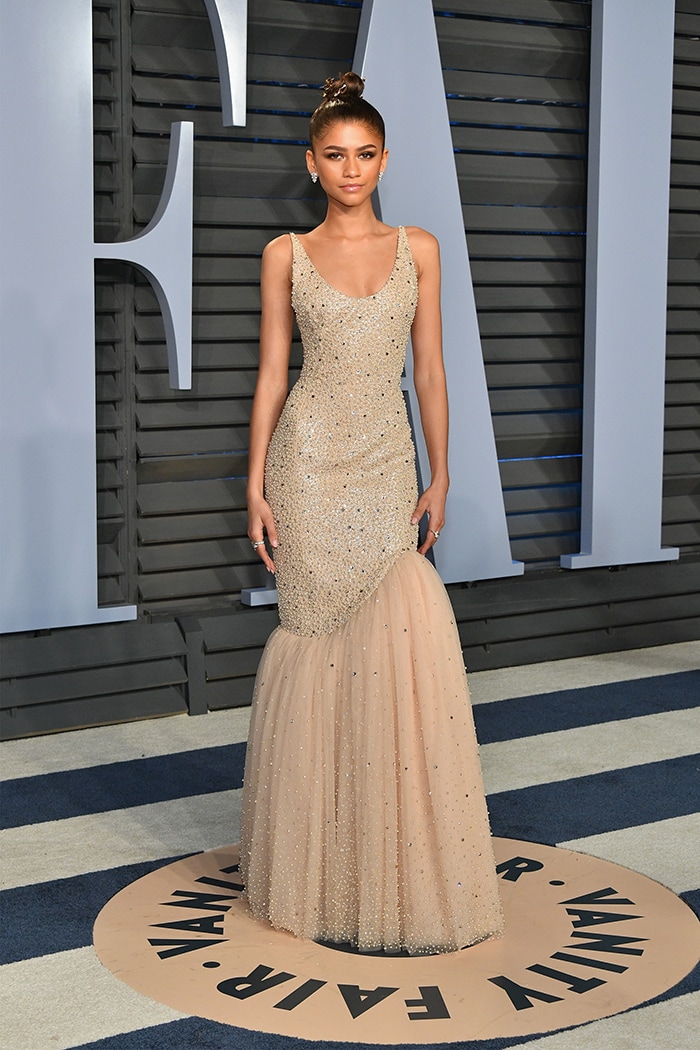 Sarah Hyland of Modern Family fame attended the Vanity Fair party in a Ermanno Scervino bustier dress with crystals and tulle. She paired her dress with Lorraine Schwartz earrings. 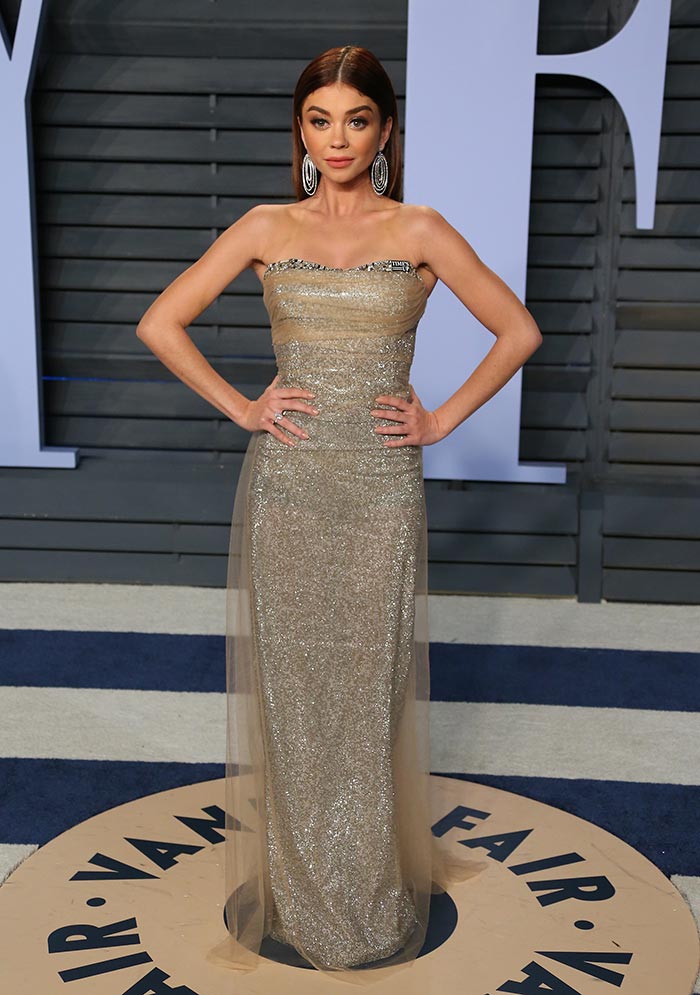 Janelle Monae Robinson, best known for her role in Hidden Figures, made quite a statement in her red rendition of a pant suit. Janelle's suit was a custom made piece from designer Christian Siriano. 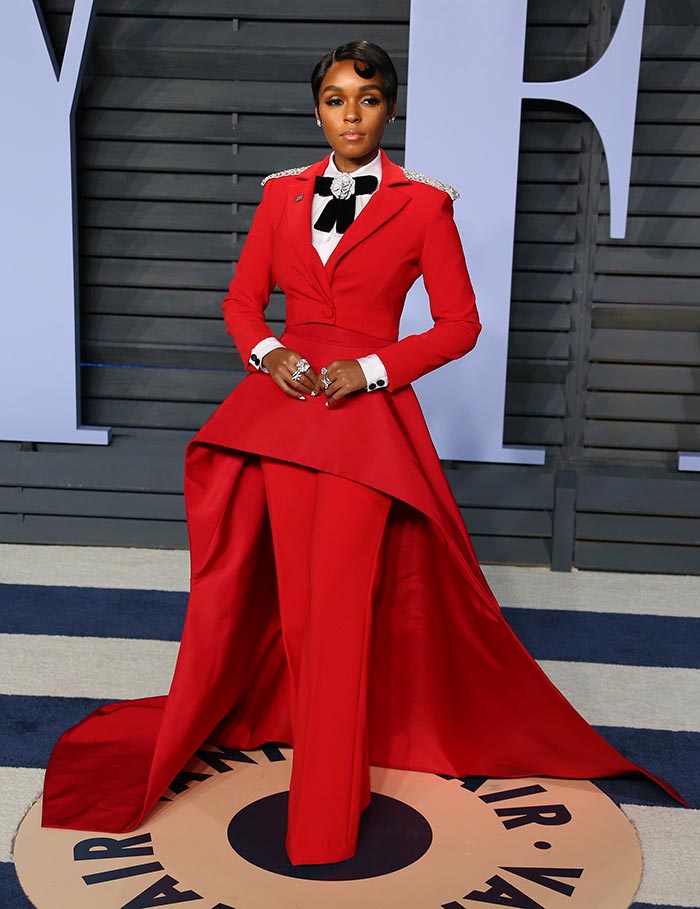 Sofia Vergara stunned in her black and silver strapless gown from Ralph and Russo. She paired her gown with diamond chandelier earrings. The Modern Family actor was attending the party with her husband, Joe Manganiello. 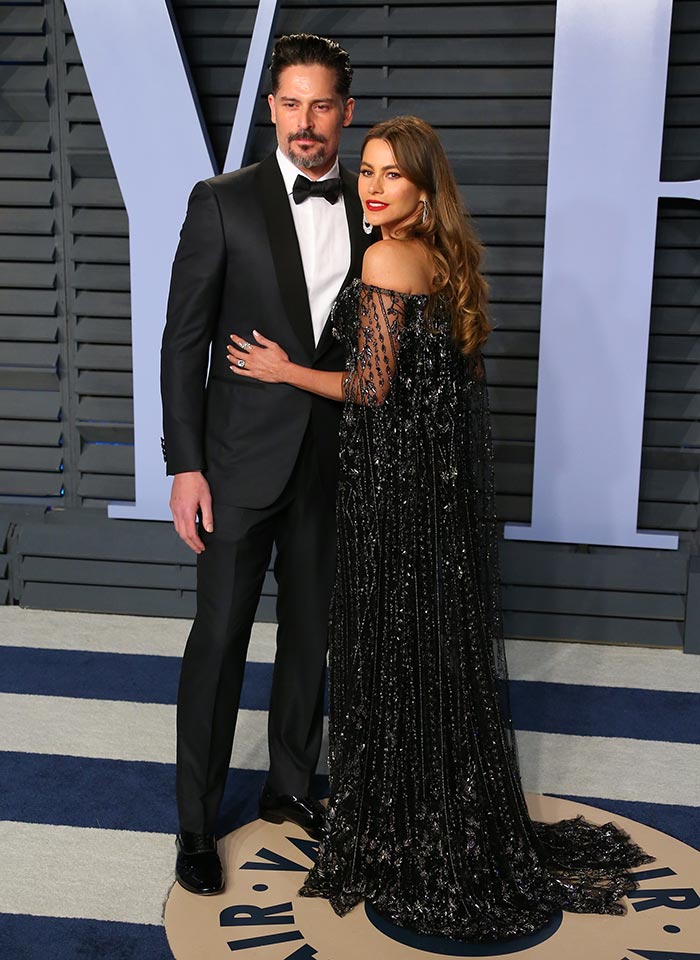 Actress Elizabeth Banks attended the Vanity Fair party with a skyrocketing glamour quotient. She went for a silver fringe dress from Ralph and Russo. Elizabeth's dress was entirely made of shining silver threads and beads. She paired her dress with silver shoes and a silver clutch. 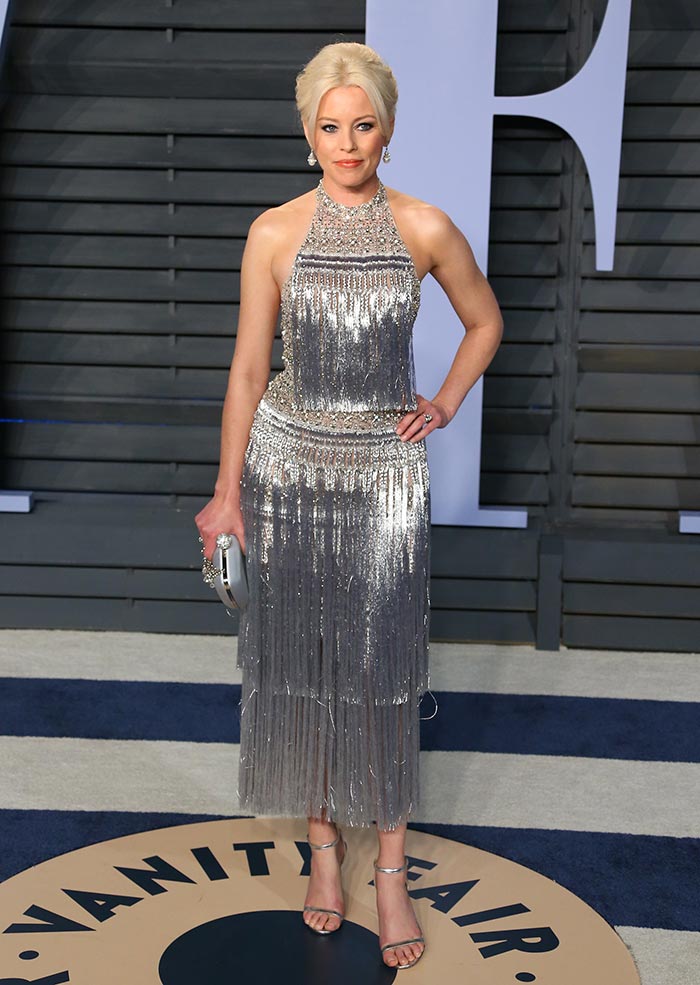 Hailee Steinfeld donned a tutu-inspired dress at the Vanity Fair party. Hailee, best known for her role in True Grit, wore a Giambattista Valli Haute Couture gown with no accessories and a sleek pulled back bun. She was definitely amongst the best dressed for the evening. 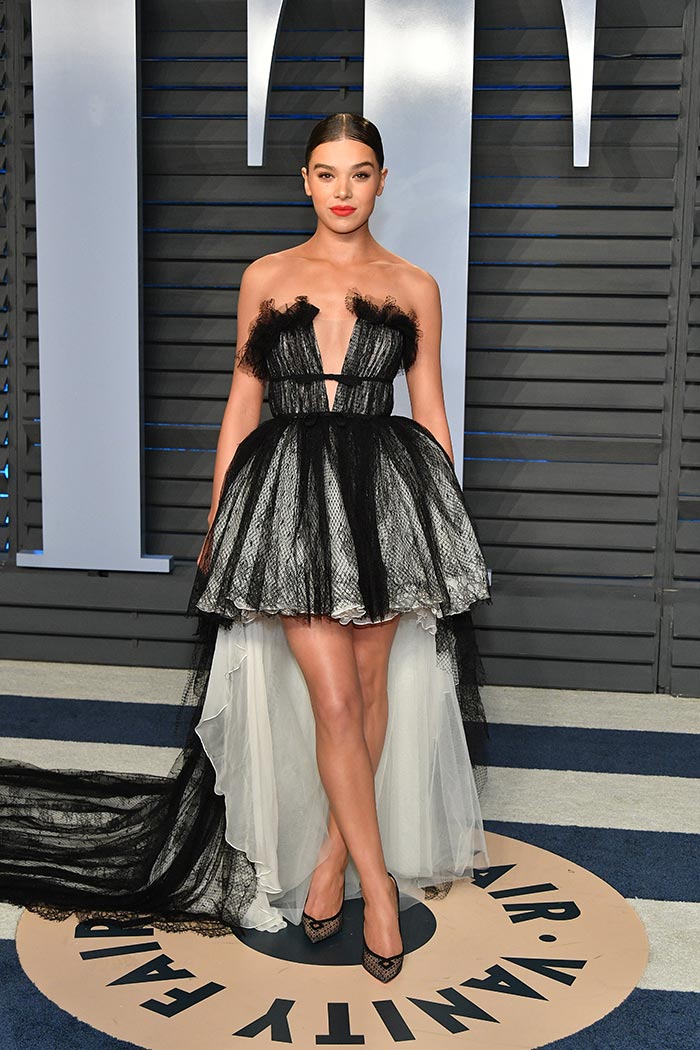 Which look was your favourite? Tell us in the comments.