Janhvi Kapoor Or Neha Dhupia: Whose Rs 17K Sureena Chowdhri Kaftan Look Did You Like More? 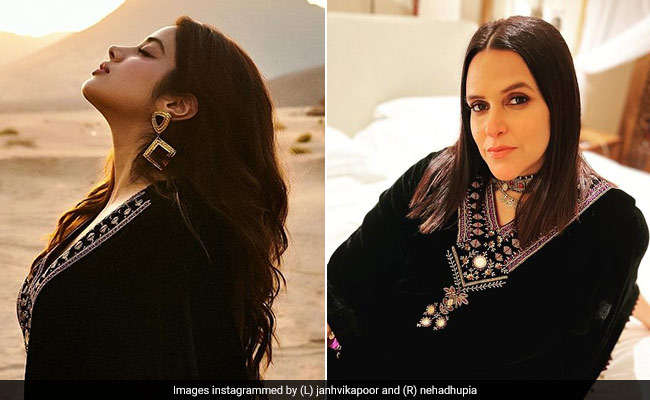 Janhvi Kapoor and Neha Dhupia style this kaftan to perfection

When celebrities prefer a particular item of clothing, you can rest assured there's something special about it. Whether it's the red dress both Malaika Arora and Lily Collins wore or the identical designer gown that Shilpa Shetty and Kylie Minogue sported, there's just something about a celebrity favoured fashion item that makes it stand out. In that case, there's a kaftan that will captivate your imagination because Bollywood's stylish actresses simply cannot seem to get enough of it. First up, there's Janhvi Kapoor. The budding fashionista was recently spotted soaking up the desert sun while looking like an Arabian dream come true. She picked the silk velvet kaftan in question and kept the rest of her outfit minimal. Janhvi opted for chunky purple earrings with her long hair in curls and darkly rimmed kohl in her eyes. We're finding it hard to take our eyes off this stunner.

(Also Read: Janhvi Kapoor In A Golden Manish Malhotra Kaftan Is As Good As Gold)

But then there was Neha Dhupia who wasn't far behind either. The Bollywood actress adores a roomy silhouette so it was only a matter of time until she set her sights on it. In her set of photos shot in her bedroom, Neha went with chunky silver jewellery on her wrists with a choker necklace. She kept her makeup look neutral with her straight locks parted down the centre.

Will more Bollywood celebrities take a twirl in this kaftan? Only time will reveal. And if you want to join the crew, it is crafted by designer Sureena Chowdhri. The chic creation is made of black silk velvet with an embroidered yoke and costs Rs 17,900. Now that's one stunning piece, wouldn't you agree?