If you can't take your eyes off Jessica Chastain and Oscar Issac on the Venice Film Festival red carpet, we don't blame you 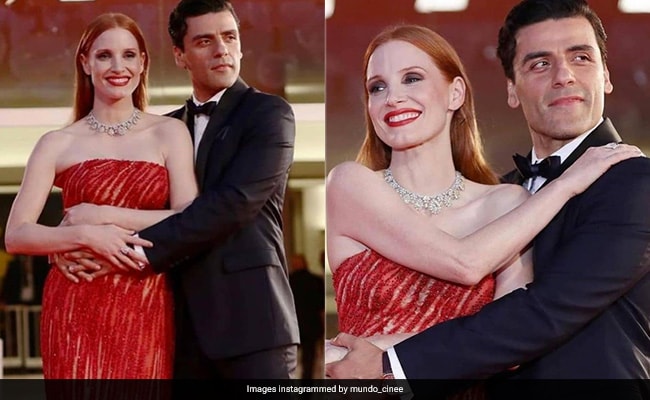 The Venice Film Festival 2021 has managed to become the most talked-about cinematic function this season for many reasons. The spell-binding films and red carpet fashion are definitely some of them. But one of the very crucial ones would be because of Jessica Chastain and Oscar Issac. Co-stars in Scenes From A Marriage, it was their joint appearance of the close friends that turned heads all the way around. To walk the red carpet at the Venice Film Festival 2021 together, Jessica was seen in a strapless red gown from Atelier Versace which featured patterned sparkling embellishment. A diamond necklace gave it a touch of elegance and her beauty look of a red lip with defined eyes and her hair worn centre-parted and straight wrapped it up perfectly. Oscar kept it just as classic in a black Prada tuxedo with a white shirt and matching bow tie. We simply cannot take our eyes off Jessica Chastain and Oscar Issac on the Venice Film Festival red carpet.

But it was more than just their joint fashion moment that captured the attention of the world. Their incredible chemistry played a part in it too. In a slow motion video of the two on the red carpet, their intimate bond is definitely visible. We don't blame you for swooning when Oscar looks at Jessica just like that.

(Also Read: Not Just Grey, But Dakota Johnson Added Very Many Shades Of Silver In Her Gucci Dress Too)

The Hollywood actors have had a close friendship for years and have collaborated together previously as well. They are co-stars in Scenes From A Marriage, about a troubled marriage which is an adaptation of Ingar Bergmann's TV series from the 70s.