Well, thanks for the throwbacks, Anamika

The grand finale of the Lakme Fashion Week is an event most fashion enthusiasts look forward to. Not only is it an event that is replete with celebrities and some of the fashion world's leading members, it is also one that showcases the abundant creative talent of the designer on display. This year it was designer Anamika Khanna, in all her glory might we add, who was chosen to showcase her collections at the grand finale of a week that truly celebrated fashion. Her showstopper was actress Kareena Kapoor but there were other famous faces in the front row.

And while the Ambanis were not present this year, there was no lack of stardust. Amongst the many stars who showed up to support Anamika Khanna were mother-daughter duo, Sridevi and Janhvi Kapoor. Sridevi looked resplendent in a pistachio green dhoti-pant jumpsuit with a matching embroidered jacket on top. Together with her top-knot bun, deep red lips and pointed grey pumps, it was hard to say that she didn't look next to perfect. Accompanying her of course, was her daughter Janhvi Kapoor who is all set to make her Bollywood debut in a Dharma Productions film titled Dhadak.

While Sridevi definitely dazzled in her stunning Anamika Khanna outfit, it was Janhvi who really stole the show. The young actress was all smiles as she walked next to her mom in a peplum top and matching pants also by Anamika Khanna. Her simple hair and makeup was fitting for the soon-to-be Bollywood star.

Just like the Ambanis in 2015, Sridevi and daughter walked hand in hand. 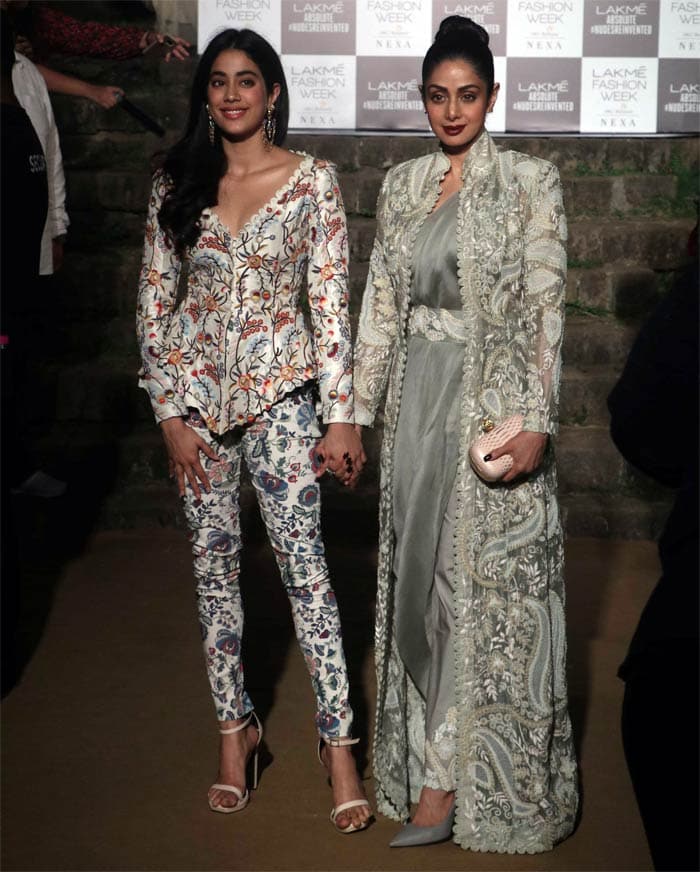 Well, thanks for these throwbacks, Anamika.

Anamika Khanna has become, over the years, Bollywood's go-to designer for red carpet events. From being featured on actresses like Sonam Kapoor to Deepika Padukone to Kareena Kapoor, her designs have been worn by India's most glittering stars.