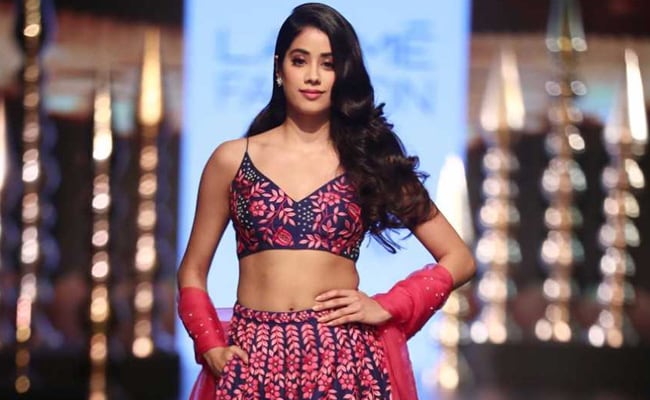 You can't deny that it's Janhvi Kapoor's year. As the celebrity child of Boney Kapoor and late Sridevi, she has practically grown up in the spotlight. But this was the year she went from being a star kid to a Bollywood actress. Her easy sense of style made her a social media celebrity with a following of millions. Then she went and made her official debut as a Bollywood actress in Dhadak earlier this year. Since then, Janhvi has been the talk of the town.

Today, the 21-year-old added yet another feather in her cap when she made her debut as a showstopper on the Lakme Fashion Week runway. The popular Mumbai-based event is known for its celebrity attendance as much, if not more than its fashion quotient. While the likes of Rhea Chakraborty, Sushmita Sen and Karisma Kapoor have already walked the ramp this season, it was Janhvi that stopped the show on the 3rd day of the event.

Termed 'Millenial Maharanis', designer Nachiket Barve's collection was replete with embellished blazers, tulle lehenga skirts, embroidered suits and gold motifs. At the very end when the lights went low, Janhvi arrived on the ramp to cheers from the audience.

For the occasion, Janhvi wore a blue and pink hued lehenga. Her blue strapped blouse was decorated with pink embroidery and paired with a tiered matching skirt and pink dupatta. While the models hit the ramp in deep jewel tones, Janhvi's pop tones were a pleasant surprise and casual chic compared to the rest. As per usual, her beauty look too was effortless and natural. Janhvi opted for gold lids, fluttery lashes, rose toned cheeks and glossy locks swept to the side.

Together, it made for a perfectly age appropriate and refreshing showstopper moment.