Malaika Arora is taking over Paris in style 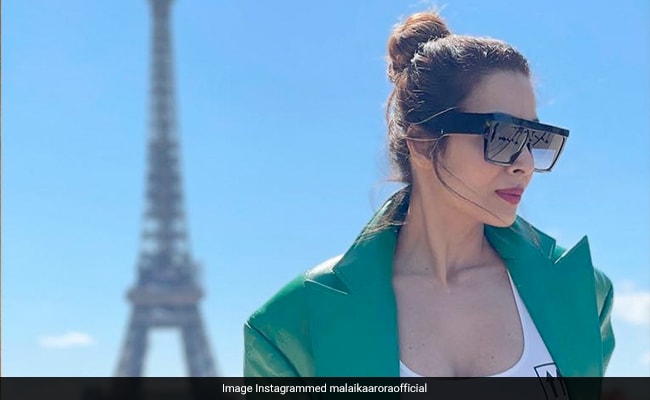 Malaika Arora and Arjun Kapoor are holidaying in Paris currently and letting the city of love seep into their very beings. Not only are they dressing alike in shirts and sunglasses, it seems that the celebrity couple are even sharing Instagram captions now. Malaika posted a round-up of their photos at the Eiffel tower but it was her fashion choices that really caught our eyes. In the picture, which includes the Eiffel tower in the background, Malaika is seen wearing a white Off-White printed bralette underneath a green oversized blazer. It is paired with green sweatpants to complete the slouchy pantsuit style. Malaika tied her hair in a high bun, tossed on a chunky pair of sunglasses and sealed it with a red lip. Her caption for the moment was, "Eiffel good too ...hehehehe am a caption chor @arjunkapoor".

(Also Read: Where Are You Off To Malaika Arora, In Your Chic Rs 3.2 Lakh Dior Coat Dress?)

If you didn't quite get her reference, you need to see what Arjun Kapoor posted first. Days ago, the Bollywood actor took to Instagram to share a set of pictures of himself and Malaika in front of the Eiffel tower. While he wore a beanie and tank, she wore a fluffy white jacket. Arjun captioned it, "Eiffel good... I knew I would...@malaikaaroraofficial #parisvibes", which is eventually what Malaika referenced. Love makes you do crazy things and that includes sharing caption too, isn't it?