Malaika Arora Or Jacqueline Fernandez: Who Slayed In The Gucci Cherry Short Suit? 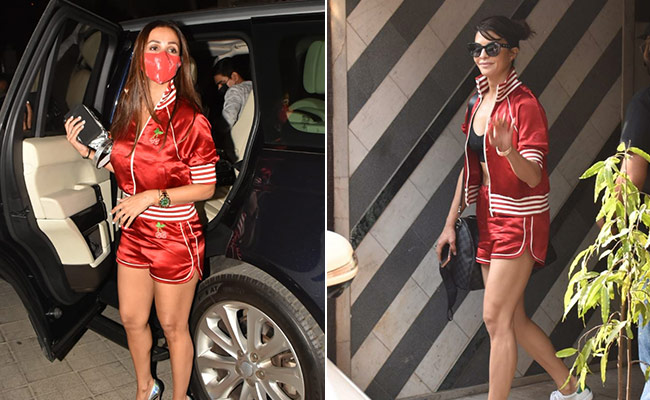 Athleisure, a reigning fashion trend in Bollywood, is so incredibly popular, that sometimes you catch sight of it more frequently than you'd believe. Celebrity fashion tastes often overlap when it comes to picking out their choice of designers and style trends being selected from the same pool. Every once in a while you're bound to see a coincidence and yesterday was one of them. Malaika Arora stepped for a house party with a starry guest list that included Gauri Khan, Amrita Arora, Maheep Kapoor and more. The Bollywood star wore a Gucci GG cherry red and white bomber jacket with matching designer shorts that showcased her toned legs. Holographic pumps added a formal touch and a red sequin face mask completed Malaika's outfit. Malaika Arora in a red Gucci jacket and shorts with heels

It seems like Jacqueline Fernandez too has great sartorial style because the Bollywood actress also picked the very same Gucci GG cherry short suit for an outing in the city. Giving it a casual chic spin, Jacqueline wore her red jacket open with a black sports bra beneath and went all out with the designer accessories. Her white Gucci sneakers and black Louis Vuitton tote were part of it, so was her black sunglasses and hair in a bun hairstyle. Jacqueline Fernandez in a red Gucci short suit with sneakers

It was 2 Bollywood celebrities in 1 designer short suit styled in 2 drastically different ways. They each slayed in their sporty and party outfits but if we had to pick only 1, it'd be Jacqueline because we can never get enough of athleisure and a designer touch only does it better. Even otherwise the actress is never short on sporty style. Possibly one of the fittest of them all, she called herself a "yoga girl forever" in her latest photo series which saw her stretch into shape wearing a colour block sports bra and pastel leggings.

Malaika Arora is fitspiration almost every day of the year and she does it in her stylish best. Like the time she broke out her dance moves in a sports bra and training shorts with sneakers and made exercising look like such a blast.

(Also Read: In A Sporty Athleisure Look, Malaika Arora Slays With Her Style And Dance Moves)