Malavika Mohanan's Take On The Saree Is The Most Striking We've Ever Seen, Thats For Sure 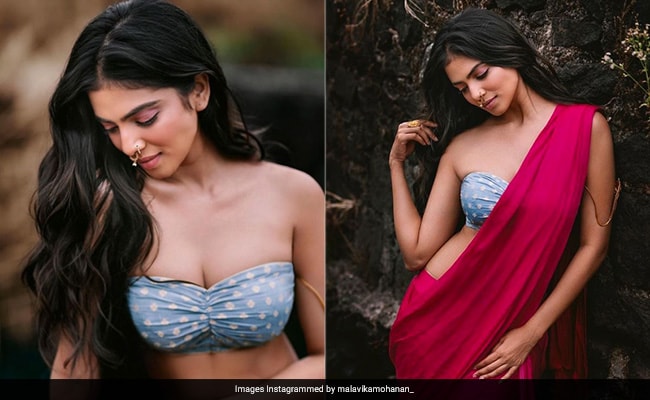 Thought that sarees only meant being bundled up under yards of cloth to turn out in a conservative ethnic look? Malavika Mohanan is bound to make you rethink that statement. Her latest set of photos got the Internet swooning with her very sultry take on the saree and even with a single glimpse of it, you'll agree. Seen in the pictures is a very ravising Malavika wearing a bright pink saree slung low on her waist and narrowly draped over her shoulder. Worn as a saree blouse is a blue printed strapless top that added both, a colour contrast to the look and risque touch too. Now that's certainly an unconventional take on the saree, don't you think?

Malavika's love for ethnic looks has been a long-running affair, at least that's what her Instagram photos proved. Time and again, we see her cavorting in a traditional ensemble and more often than not, it includes a signature twist. Her contemporary lehenga look included a long sleeve red blouse with a coordinated printed skirt worn without a dupatta. Silver jewellery and that smouldering look in her eyes were all it needed, really.

For the festivities, she chose a demure salwar kameez suit by Puneet Balana but its delightful leaf print in green and purple tones, it added a spunky touch to the otherwise traditional outfit. Anyone who says you can't do both with ease needs to be referred to Malavika Mohanan right away.