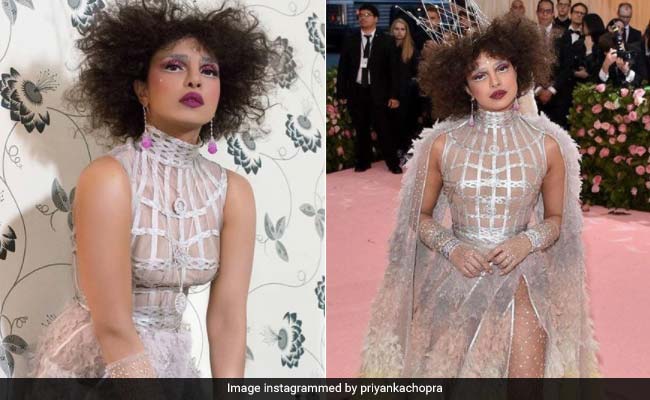 Priyanka Chopra never fails to turn heads on the red carpet. Her Grammys 2020 Ralph and Russo dress whose neckline dipped to the waist made that point abundantly clear. Through the years, her Met Gala looks have followed suit. Being an event that brings fashion and art to the forefront has worked in favour for the superstar. Back in 2017, Priyanka made her debut at the prestigious event wearing a Ralph Lauren trench gown. Nick Jonas, who also donned the designer, made an appearance with her at the event and that's where their love story reportedly began. The next year, she continued her designer run in a burgundy gown with a jewelled head veil.

(Also Read: Grammys 2020: Priyanka Chopra Is Bold And Beautiful In A Plunge Dress)

Priyanka Chopra's Met Gala 2019 look was the one that has been most memorable. The theme, Camp: Notes On Fashion was based on Susan Sontag's essay on the subject. This time around, she walked the pink carpet with husband Nick Jonas, both wearing Dior.

(Also Read: Priyanka Chopra: "I Won't Say I Was Always Confident About My Personal Style")

Much like Deepika Padukone's turn at the same event, for Priyanka too it was her beauty look that stole the show. Pink shadow swept the lids with stark white lining it below and silver tipped lashes. Fuchsia blush added a flush to her cheeks with crystals studded over it. A metallic maroon lip and frosty eyebrows completed the look.

On top of her mop of voluminous curls, Priyanka wore the Dior Haute Couture palladium crown as her final accessory.

There's no place for an avant-garde fashion display like the Met Gala.

(Also Read: Miss World From India: 6 Beauty Queens Who Have Made Us Proud)