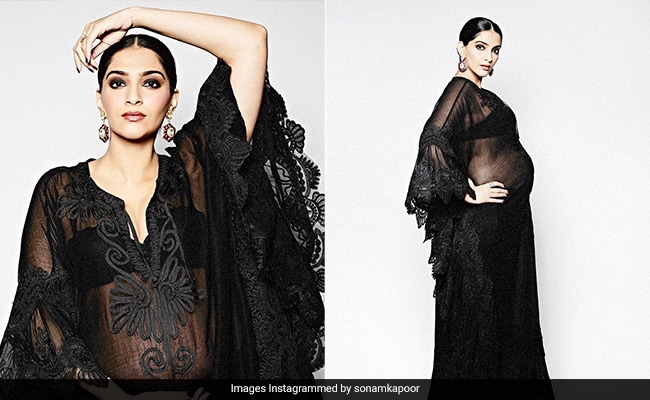 Maternity fashion is gradually becoming a thing these days. The point here is to embrace one of the most beautiful feelings in the world "motherhood," without compromising on your style quotient. And, someone who is making our hearts skip a beat with her maternity looks is Sonam Kapoor. The actress has delivered some great fashion cues since she announced her pregnancy. This time, she added a tinge of glamour to her chic avatar. Sonam wore a long, black see-through embroidered kaftan paired with a black bralette beneath. Her ensemble (kaftan) showed scalloped lace borders. She may not know but she has given us a style statement worth remembering for a long time. She adorned herself with dangler earrings. With defined brows, smoky eyes and tinted lips, she completed her look. She preferred keeping her tresses tied in a bun.

Sonam Kapoor has been giving us some major fashion cues through her maternity photoshoots. She shares the frame with her husband Anand Ahuja, many times, and drops some couple goals as well. Making summer a rather stylish one, she slipped in an easy-breezy maxi dress in silk organza fabric. Her beautiful soft lemon-hued outfit came with a plunging square neckline, tie-knot patterns in the front and long sleeves. Anand, on her side, looked smart wearing a monochrome look in a pastel blue shade.

Whether it's western or ethnic, mother-to-be Sonam Kapoor has taken it upon herself to impress us with her style statements. Once, the actress made heads turn her way in a stunning wraparound white statement saree by Abu Jani-Sandeep Khosla. She draped it with a bandeau-style strapless blouse. Now, since it's Sonam, there has to be something unique about her style. The ethnic drape had embellishments and a thigh-high slit in the front. She enhanced her look further with traditional jewellery and kohl-rimmed eyes.

Also Read: Even We'd Mistake Sonam Kapoor In A Magical White Saree To Be A Painting

Sonam Kapoor made athleisure look cool. She wore a bright cobalt blue laidback version of a pantsuit paired with a plain white tee underneath. She flaunted her baby bump while posing with Anand Ahuja who wore an oversized shirt with khaki trousers.

And, how can we forget Sonam Kapoor and Anand Ahuja's adorable pregnancy announcement photo shoot? Sonam dazzled in a classic black bodysuit that had a plunging neckline. The actress, caressing her baby bump, was the cutest thing we saw the other day.

Sonam Kapoor's sassy looks are all feast for the eyes. Don't you think?