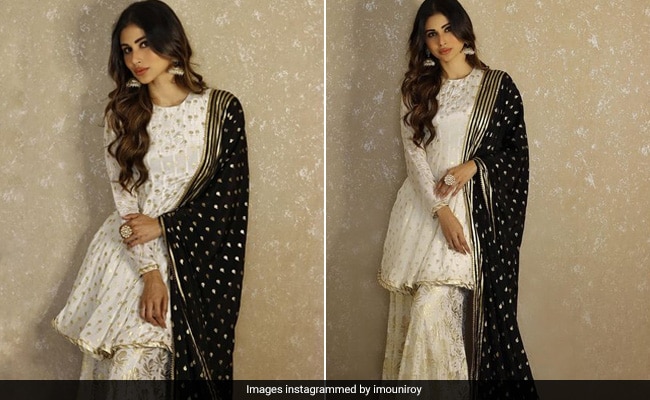 Mouni Roy has been spreading magic ever since she stepped into the Hindi film industry, after having successful hits in the Television world. But one thing which the actress never forgets to do is, sprinkling her glamour through her amazing styling choices. While we rarely see Mouni Roy styling an ethnic look, whenever she does it is a treat for the eyes. Her recent Instagram post is one of such days. After stealing our hearts by her golden magical gown in Dubai, the actress did the same again with her white and golden sharara set by the designer Masaba Gupta. The outfit featured a white sharara set with golden gota work all over it in polka dot and leaf patterns. Contrasting it perfectly, the Naagin actress adorned it with a black duppatta with similar gota work in golden . Styled by Rishika Devnani, the actress kept her tresses in loose beachy waves and completed her look with jhumkas and a statement big ring. For the face Mouni Roy went towards a pinkish tone with tinted cheeks and bold eyes. The look seems perfect for any occasion, be it a house pooja or a sangeet function, isn't it?

Mouni Roy is definitely pure beauty and grace whenever she comes into ethnic clothing. The actress styles her suits with absolute subtlety and elegance. One such example is the yellow printed suit set worn by her by the brand Aachho. The halter neck kurti in Anarkali style incorporated floral printed designs throughout it in brown shades, and the bottom loose plaazo just as is trendy included the same print with just a little addition of gota design towards the bottom border. With minimal makeup and flowing straight hair, Mouni Roy surely knows how to ace the ethnic look.

Glowing in the sun, Mouni Roy aced another one of her looks, this time in a sea green salwaar kameez set. The kameez had golden gota border at the full sleeved wrist and was completed with a baby pink colour net duppatta. The actress looked beautiful in the outfit accessorizing it with golden jhumkas and middle parted tresses.

One thing for sure is that Mouni Roy loves experimenting with her looks, be it western or ethnic. While we already love her western looks like scarf tops and gowns, ethnic is one which we are now adding on to our list.