Oscars 2022: Hollywood's Favourite Couples Brought Their A-Game On And How On The Red Carpet

From Will Smith and Jada Pinkett to Christen Stewart and Dylan Meyer, the fashion game was on point at the red carpet of Oscars 2022 The 94th Academy Awards has witnessed power couples nailing their red carpet appearance. From shimmering gowns to chic looks, the red carpet event was a sight for the sore eyes. Best actor winner Will Smith and his wife, actress Jada Pinkett Smith were among the couples who made the fashion traffic and stare. Will wore a Dolce and Gabbana black mohair wool tuxedo. His classic black ensemble consisted of a blazer and matching pants with a waistcoat and contrasting white shirt inside. He looked smart with the tie on. Jada, on the other hand, made a striking appearance in a gorgeous Jean Paul Gaultier Couture SS22 gown. Her emerald outfit featured a high neckline and an exaggerated ruffled floor-sweeping dramatic extension. She enhanced her look with stud earrings and rings. For makeup, she opted for well-defined brows and glossy lips. 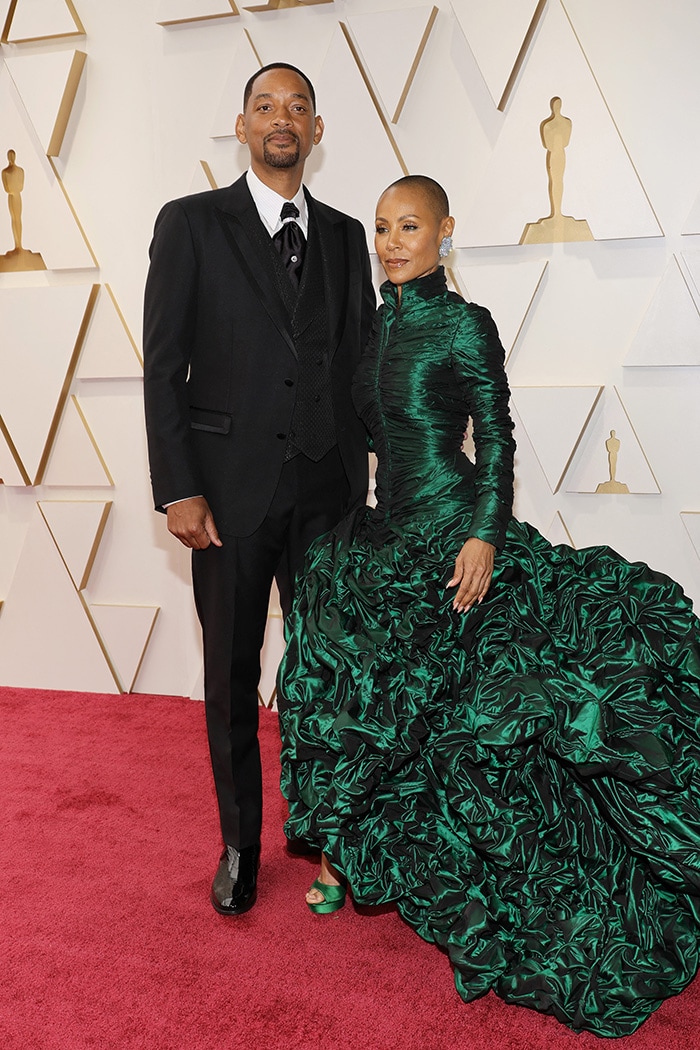 Next, we have Penelope Cruz and her husband Javier Bardem, whoalsoservedmajor couple fashion goals at the Oscars. Like a true-blue fashionista, Penelope rocked a black dress with an open back by Chanel.Hersuperfluous gownfeatured a halter neckline adorned with sparkling embellishments including a bow-like design on the front. Her stud earrings complemented the look. With kohl-rimmed eyes and subtle glossy lips, she looked great. Javier pulled off a monochrome look in absolute style. He wore an all-black tux and was good to go. 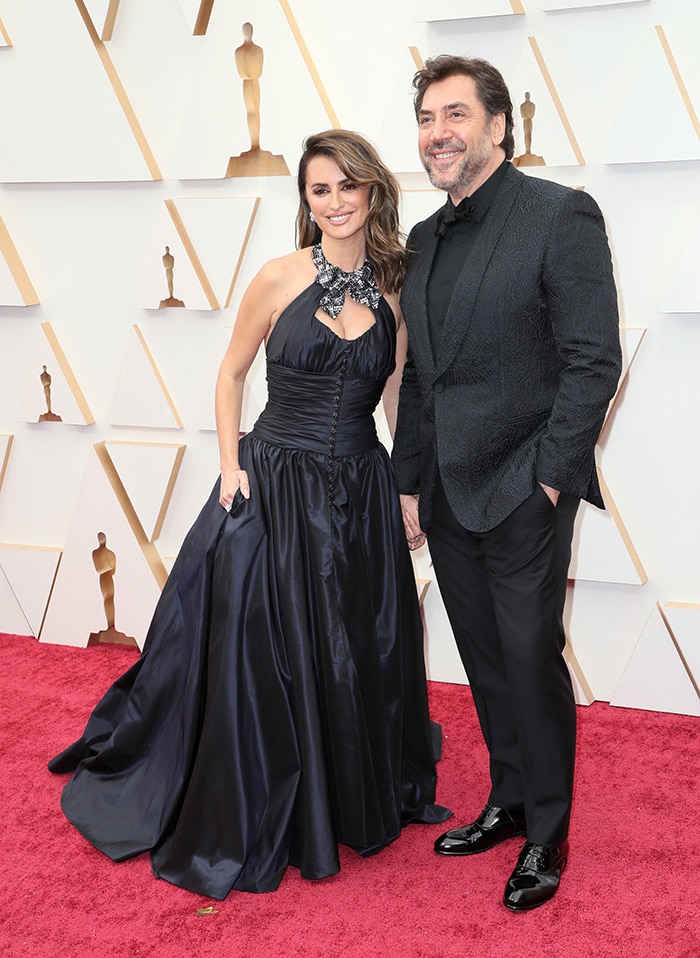 Nicole Kidman and her husband Keith Urban raised the glam quotient pick for the night. The beauty, Nicole, dazzled in a stylish pastel gown that came with a dramatic peplum poof and an embellished long trail. Her strapless outfit also featured a plunging neckline. She picked a stunning diamond necklace and a bracelet as far as accessories are concerned. With a bold red lipstick and her hair pulled back, she looked fantastic. Keith looked dapper in a black suit set with a white shirt beneath. Don't forget his black bow. 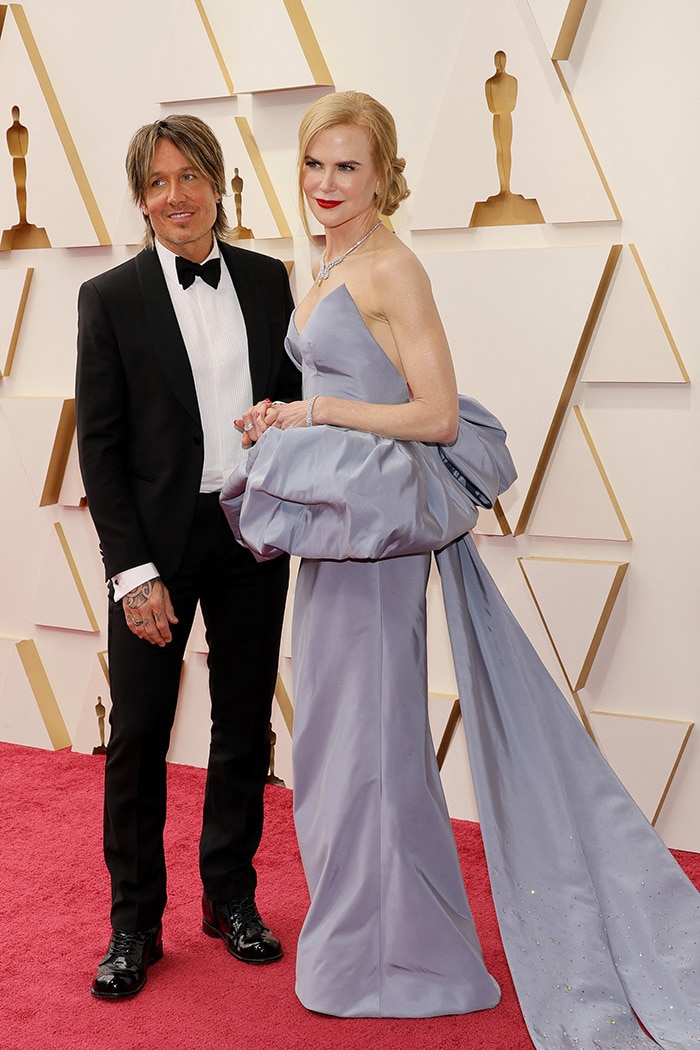 Kourtney Kardashian and Travis Barker also attended the event in their stunning all-black ensembles. Kourtney wore a body-hugging dress without straps. She adorned herself with long dangler earrings. With a sleek hairdo and black strappy footwear, she flaunted the outfit like it was nobody's business. Travis Barker was in sync with her fianceé given the colour of the ensemble. He wore a black suit set paired with a black tee inside. He completed the look with black shoes and sunglasses in the same hue. 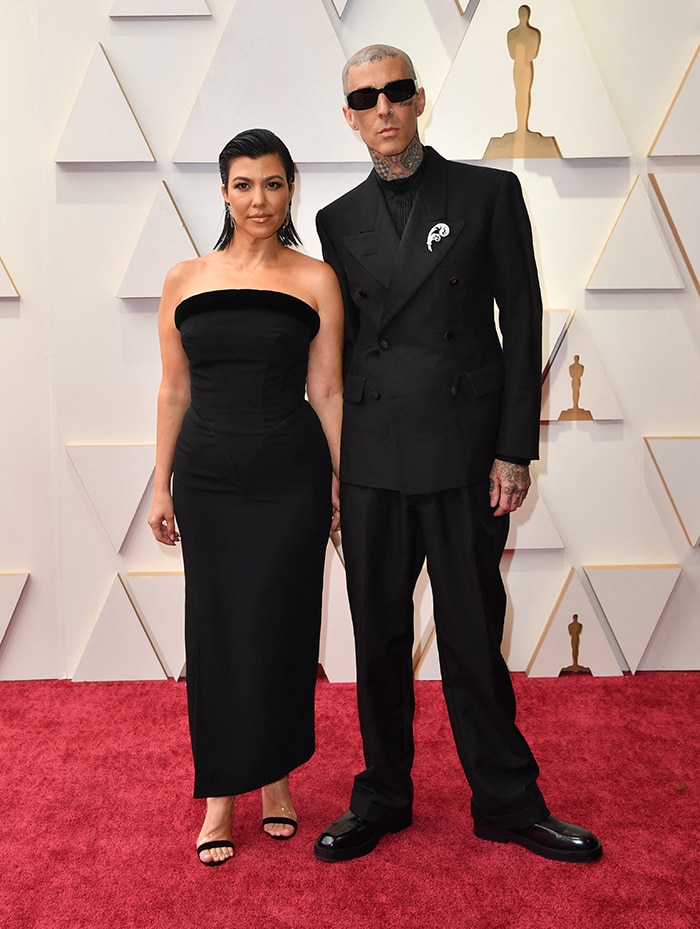 Actress Kristen Stewart gave yet another uber-cool fashion statement at the event and we couldn't take our eyes off her. She ditched elaborate gowns and wore a chic Chanel look. She appeared super stylish in a white unbuttoned shirt and black shorts. However, she layered herself with a black blazer. With kohl-rimmed eyes and her side-swept hair, she nailed the look. Her girlfriend Dylan Meyer wore a black pantsuit set paired with a white shirt. 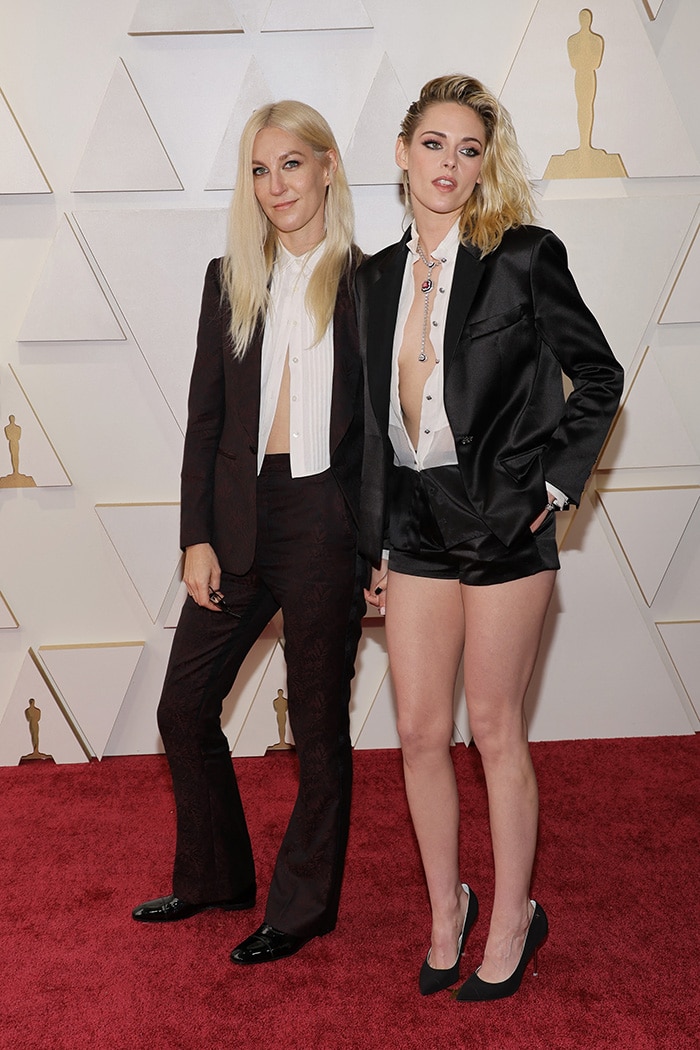 Ashton Kutcher and Mila Kunis look adorable together in their elegant picks. Mila opted for a floor-sweeping one-shoulder soft pink gown. The outfit helped her flaunt the curvaceous figure, however, it also included a long extension. Defined brows, contoured cheeks and glossy lips accompanied her sassy look. Ashton opted for a pantsuit set with a black bow. 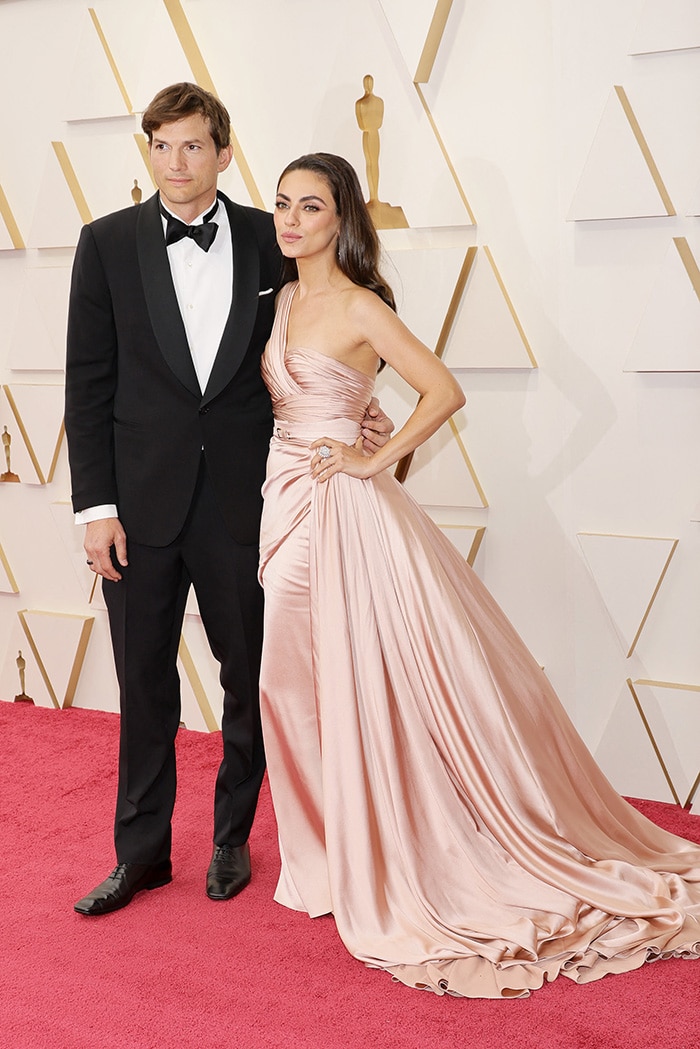 Sophie Turner flaunted her baby bump in a classic red gown for the Oscars. Her outfit featured a high neckline and full sleeves and gently pleated peplum waist. She tied her middle-parted hair in a ponytail and enhanced her looked with winged eyeliner. Her husband Joe Jonas wore a suit set with contrasting white detailing on it. He also took a silver chain. 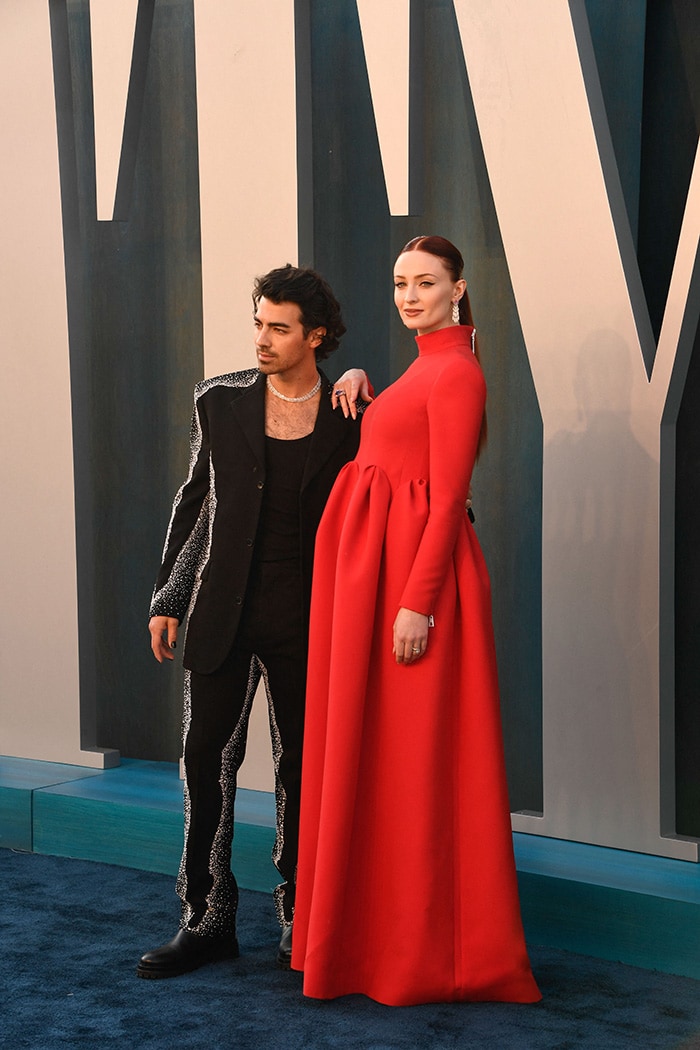 Chrissy Teigen looked radiant in a silver sparkling sequined gown with an exaggerated floor-sweeping pattern. She was seen flaunting her well-toned legs in stylish wear. Her husband John Legend opted for a monochrome look and appeared in a white suit set. Don't forget his black bow. 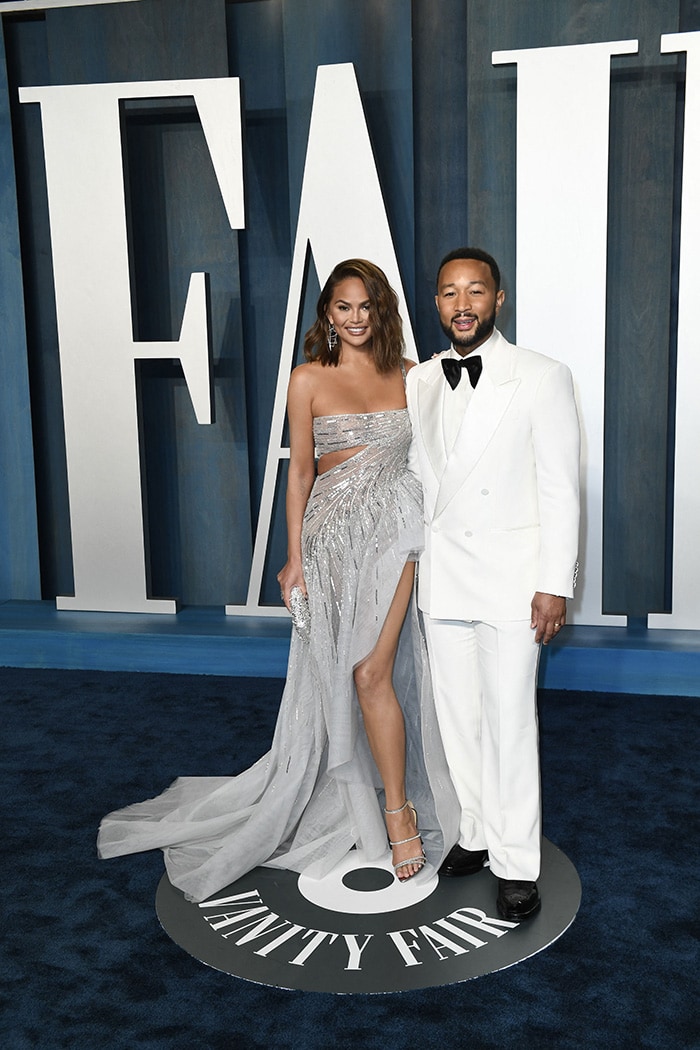