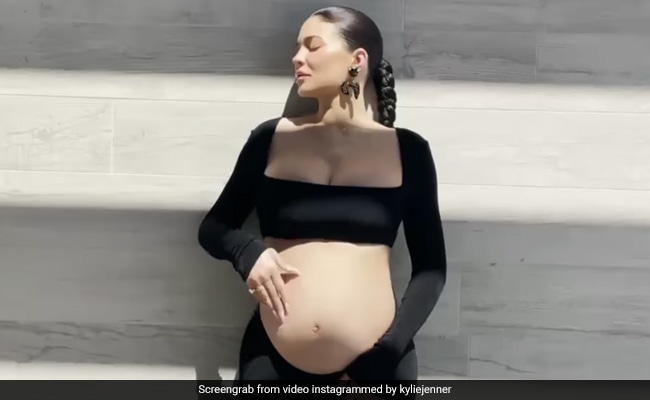 Looks like the stork flew into this Jenner-Scott household this summer! After weeks of radio silence and fan-flamed theories, Kylie Jenner has taken to her Instagram profile with over 250 million followers to announce her pregnancy. In a video posted by her, Kylie is seen at the doctor's office accompanied by her daughter Stormi Webster and partner Travis Scott. It may have been a series of sweet moments but Kylie made it abundantly clear that she's going to be one stylish mama. The video includes a stunning picture of Jenner cradling her baby bump. She is seen in a black long sleeve dress with a cutout torso and fitted bottom. With a radiant face and hair worn in a tight braid, Kylie also wore a statement set of dangling earrings.

This is Kylie Jenner's second pregnancy with her partner Travis Scott. The adorable video also sees Kylie at her recent 24th birthday party which was spent in a relatively low-key fashion by a candlelit poolside. Kylie is seen blowing out candles on her birthday cake as well as cuddling up with her daughter and partner.

(Also Read: Only Kylie Jenner Can Give A Basic Casual Outfit Her Daringly Chic Twist To It)

Among the many sweet moments in Kylie Jenner's pregnancy announcement video there is the one where Stormi broke the news to grandmother Kris Jenner with ultrasound photos. Stormi might also be the most excited elder sister as she hugged and kissed her bump of a sibling-to-be. It's exciting to see her document her second pregnancy after staying off the grid during her first. If Stormi and Kylie's adorable relationship is anything to go by, we can't wait to see what's in store for Kylie's baby number two!

(Also Read: 10 Times Kylie Jenner And Stormi Webster Were The Most Chic Mother And Daughter Duo)