Ranbir And Vaani Kapoor, You Didn't Have To Burn Up The Screen This Way 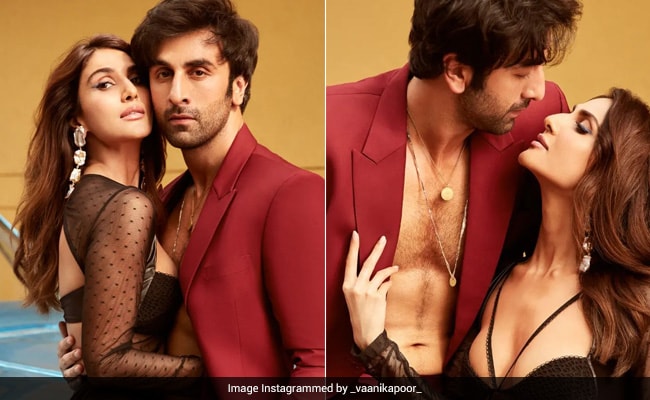 Ranbir Kapoor has his plate full and with a long Bollywood hiatus, he was obviously going to soar temperatures. But he is not doing it alone. Vaani Kapoor joins in on the double whammy to look splendid on the screen together. We just have one complaint though; a disclaimer would have been great to get us prepared with a fire extinguisher because we weren't ready for this burn up. Ranbir Kapoor and Vaani Kapoor continue promoting their film Shamshera in a latest post. Ranbir Kapoor needed just a maroon pantsuit with nothing else at all and Vaani Kapoor joins in with a black lace dress that's too good to be true. Vaani Kapoor's sheer dress is paired with a black bandeau high waisted bikini set. Both laud on the jewellery with Vaani's shoulder dusters and Ranbir's layered necklaces hitting the right spot. It is impossible to find a flaw!

Black is totally Vaani Kapoor's colour and more so for the promotions of Shamshera. A black saree seems insignificant if you don't have the grace to carry it. That's no problem for Vaani Kapoor though because oozes with it when a black saree is in play.

Vaani Kapoor is promoting her film in swing but her trend is totally on point while she is at it. A fringed maxi dress could put anyone into the fashion zone and considering Vaani Kapoor owns it altogether, we're not surprised she's slaying it.

Also Read: Vaani Kapoor's Boho Chic Dress Is How We Want Our Summer Days To Look Like

Vaani Kapoor is a total smokeshow when it comes to movie promotions so consider yourself warned when she burns the screen again with or without Ranbir.

Also Read: It's Impossible Not To Fall Madly In Love With Vaani Kapoor's Modern Take On The Lehenga