While the entire star cast dazzled at the premiere, the one person who really caught our attention at a promotional event just before was Rita Ora 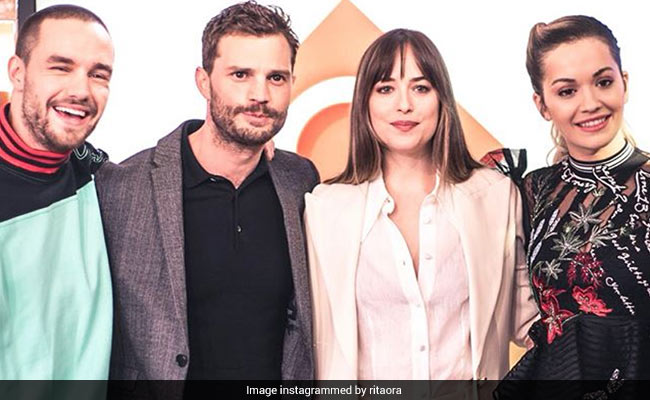 The cast and crew of Fifty Shades Freed have been busy promoting the film in Paris over the last few days. The cast including the protagonists Dakota Johnson and Jamie Dornan were all in attendance for the events and premiere in Paris. Also present, were Rita Ora and Liam Payne who are singing the song "For You" in the upcoming movie. Rita is also playing the role of Mia Grey, Christian Grey's sister in the film. While the entire star cast dazzled at the premiere, the one person who really caught our attention at a promotional event just before was Rita Ora. If you're wondering why particularly Rita, it's because she chose to wear an outfit by none other than Indian designer Falguni & Shane Peacock to the event.

Rita's black ruffled and sheer Falguni & Shane Peacock dress really did make her stand out. The ruffles and embroidery on the bodice with an entirely sheer bottom were well suited to the singer and actor who is constantly seen experimenting with her style.

This isn't the first time this Indian designer couple's garments have been showcased on an international platform by an A-list star. Falguni & Shane Peacock's designs have made their way to big-ticket shows and Hollywood red carpets many times before.

From Kylie Jenner to Mariah Carey to Gwen Stefani, Falguni & Shane Peacock's creations have been spotted on some of the most famous people in the world.

Even our very own Desi Girl Priyanka Chopra chose to wear an embroidered white, sheer gown from Falguni & Shane Peacock to the Oscars in 2016. At the time, she was reportedly just behind Hollywood actress Olivia Wilde on the Google search rankings related to the keywords "red carpet dress". Well, Falguni & Shane Peacock seem to be doing something right.

Fifty Shades Freed, the third and final installment of the Fifty Shades film series based on the novels by E L James, is all set to release on February 9.