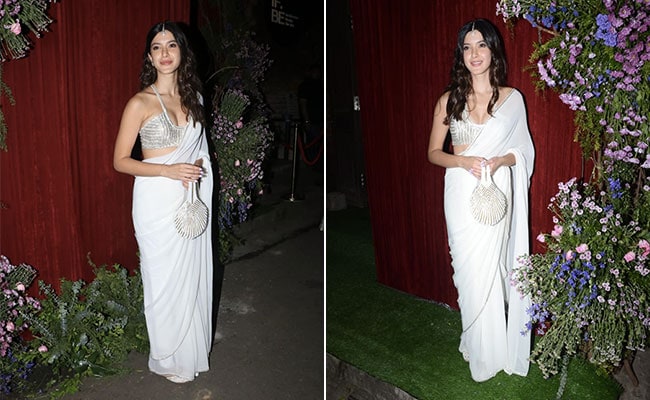 Shanaya Kapoor is a vision in white

Shanaya Kapoor's love for all things stylish is well-known among the fashionistas. There hasn't been a single day when she did not excite us with her wardrobe choices. This time around, she made a classic traditional appearance in a saree. For Kunal Rawal and Arpita Mehta's wedding bash, Shanaya looked surreal in a white saree. Her beautiful ethnic drape featured thin sparkling silver borders enhancing the overall look of the attire. With that, she added a super stylish sequin embroidered halter-neck blouse with a plunging neckline. As for accessories, she just took a sleek maang tika to adorn herself. For makeup, she wore contoured cheeks, pink tinted lips and subtle eye makeup. She styled her hair in tousled waves. And her stunning sequined handbag cannot be missed.

Also Read: Shanaya Kapoor And Her Holiday Style Are Having The Time Of Their Lives 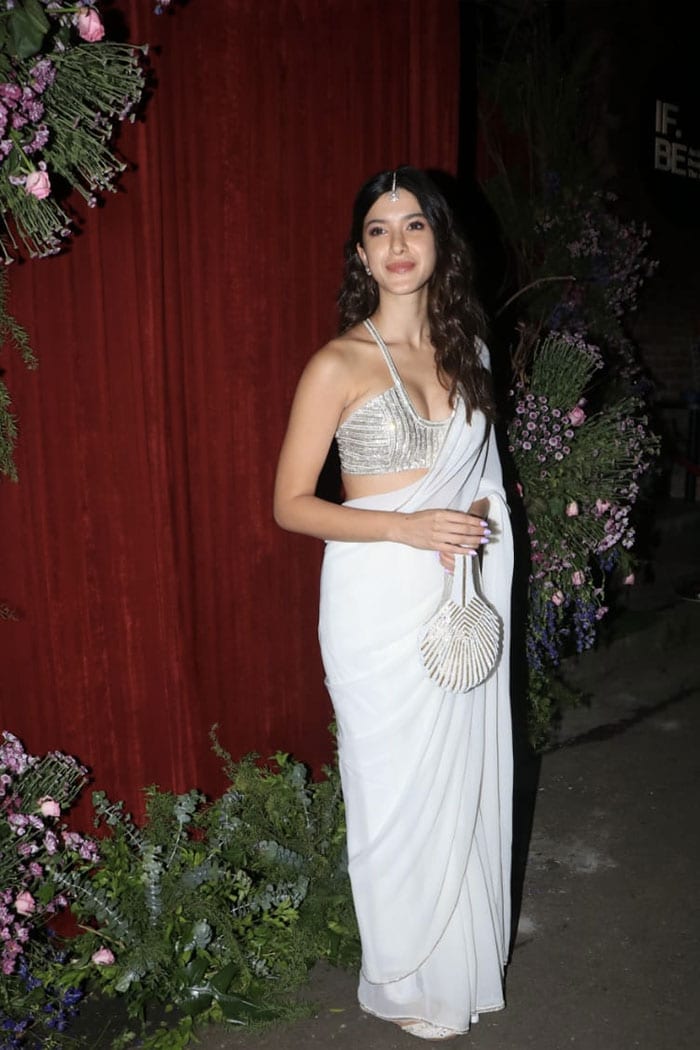 Sometimes, Shanaya Kapoor also believes in experimenting with her ethnic picks. She once tried an Indo-western fusion attire by ace fashion designer Manish Malhotra. The actress wore a white crop top and matching loose-fit trousers. To give it a contemporary twist, she layered it with a long see-through cape on top in the same hue. Matching the aesthetics of her outfit were those traditional dangler earrings. She went for blushed cheeks, and glossy lips and left her hair open.

Shanaya Kapoor rarely wears sarees but when she does, it has to be special. She dazzled her way in a gorgeous green embroidered saree looking like a perfect bridesmaid. Her green chiffon saree showcased embroidery work with gold patti around the borders. She teamed it with a stunning strappy blouse adorned with crystal and sequin embellishments. Shanaya accentuated her look with dangler earrings and bangles. With contoured cheeks, heavy eye makeup and a pink tint on her lips, she aced the ethnic look. She secured her tresses in a bun decorated with white flowers around.

Shanaya Kapoor's ethnic closet is flooded with steal-worthy outfits. And apart from sarees and other contemporary wear, she also likes to flaunt lehengas. Once, she wore a pastel lime lehenga showcasing elaborate threadwork all over. With that, she took a matching blouse with a similar kind of work. However, to make it more interesting, she carried a contrasting pastel blue dupatta to complete her look. She just picked maang tika and kada from the accessories department. The actress amped up her look with minimal makeup and her hair tied in a messy bun.

Also Read: Shanaya Kapoor Stands Out In A Sea Of Bright Colours Of Ibiza In A Chic White Summer Dress

If you ever feel confused about choosing the right ethnic wear for yourself, we are sure Shanaya Kapoor's style statements will help you out in this direction. She pulled off a majestic orange Arpita Mehta ensemble and looked surreal. Her outfit included a bright orange lehenga teamed with a rather heavy embellished blouse supported by straps. She also wore a tie-dye dupatta alongside. With minimal makeup and those traditional jhumkas, she was good to go.

Also Read: Shanaya Kapoor Is Going To Ibiza And Her Neon Co-Ord Set Follows Her To The Party Island