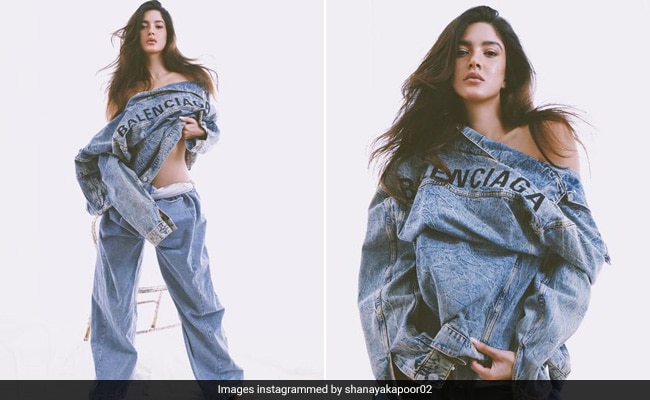 It's safe to say Shanaya Kapoor loves her denims a lot

Shanaya Kapoor is all set for her Bollywood debut in Bedhadak where the actor would be seen alongside Gurfateh Pirzada and Lakshya Lalwani. The actor has however already made her fashion debut in the industry. Shanaya is the newest style icon of Bollywood and a true inspiration for all her young fans. With swoon-worthy wardrobe choices the actor makes at each of the events, Shanaya does not discriminate between ethnic dressing and western fashion in any way. For her latest photo shoot, Shanaya set the internet on fire as she opted for a Balenciaga denim jacket and loose fit pants. She looked uber cool as she took the jacket in front of her and posed for the pictures. Her loose fit pants gave her a carefree and free-spirited look which suited her open tresses and minimal dewy makeup with subtly-kohled eyes and lip lip tint. Shanaya's bare feet also complemented her carefree aura.

Also Read: Shanaya Kapoor Could Steal The Title Of Princess of Genovia Dressed As Mia Thermopolis For Halloween 2022

Shanaya Kapoor's casually chic wardrobe choices are fascinating and we love looking at her looks. The diva recently shared a series of pictures with her brother on Instagram where she was seen wearing a stunning white midi dress which looked phenomenal on her. Her full-sleeved midi dress featured cutout detailing at the neckline with a bodycon fit which accentuated Shanaya's well-toned body. In contrast with the ivory dress, the actor wore bright green heels and opted for minimal rosy makeup which made her look even more radiant.

Shanaya Kapoor wore a cutesy polka dot outfit from the designer label Gauri and Nainika. The dreamy white and pink polka dot number featured a strapless tube neckline with corset top and layered ruffle and frill detailing at the bottom. The outfit made Shanaya look as though she was straight out of a fairytale. Shanaya's loose tresses and minimal pink makeup looked perfect on the diva.

Shanaya Kapoor surely knows how to slay fun coloured numbers as well as basic pastels. She was seen in a stunning white co-ord set, looking uber stylish, fashionable and chic. The outfit featured a halter neck top paired with a mini skirt. She accessorised the look with silver peep toe heels and a statement shoulder bag and aced casual dressing like no one else.

Shanaya Kapoor's casually chic fashion is breath-taking in every way.