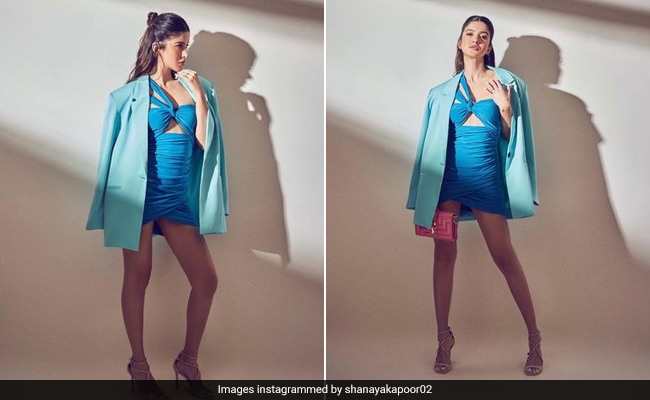 Now that's how you beat the blues in style

Shanaya Kapoor, who is all set to make her Bollywood debut with Bedhadak, is the talk of the town already for her mind-blowing sense of styling. Be it street fashion or heavy lehengas, Shanaya knows how to steal the show. And, she just did that in a stylish blue dress with cutouts and a wrap-around pattern. The mini dress hugged Shanaya in the right places further accentuating her curvaceous figure. What's also worth mentioning is the smart sky blue blazer on top. Shanaya opted for a pair of silver heels to round off her look. With dewy makeup and a subtle brown shade on her lips, she went for a half-bun hairstyle to complete her sassy look.

Also Read: Shanaya Kapoor Shines So Bright, You Can't Look Away Even If You Tried

Shanaya Kapoor is a popular fashionista and we aren't saying it without proof. Previously, she left us swooning in a stylish white co-ord set. She wore a white crop top teamed with a mini skirt in the same hue. The actress added an element of sparkle with embellished sandals. Her silver handbag looked amazing. For a simple fuss-free look, she chose glossy lips and straight hair.

There's no one like Shanaya Kapoor, and her style statements are equally captivating. She once activated our weekend party mode with her choice of outfit. The actress wore a stylish silver mini dress adorned with sequins all over. Her hoop earrings and rings suited the glamorous look. She completed it all with sparkling brown eyeshadow and a shade of pink on her lips. Shanaya left her tresses open.

We only wish we looked as stunning as Shanaya Kapoor in show-stealing dresses. Just see her staring straight into our eyes in a chic black dress. The cutout detailing and a side slit added oomph to her appearance. A pair of stud earrings looked fine on Shanaya. She pulled off the sassy avatar with kohl-rimmed eyes, glossy lips and her hair secured in a top bun.

Also Read: There's Nobody Chicer Than Shanaya Kapoor Casting A Magical Spell On Us In A Stunning Cutout Black Gown

Shanaya Kapoor often aces party numbers like an absolute diva. Here's another time she made us take notes in a snazzy yellow dress. She looked so good in the stylish pick that we couldn't help but fall for her fashion sense even harder. As the look demanded, she wore contoured cheeks, sleek eyeliner and glossy lips. Her tresses styled in curls seemed perfect here.

Shanaya Kapoor knows how to rock every outfit with beauty and elegance. What do you think?

(Except for the headline, this story has not been edited by NDTV staff and is published from a press release)