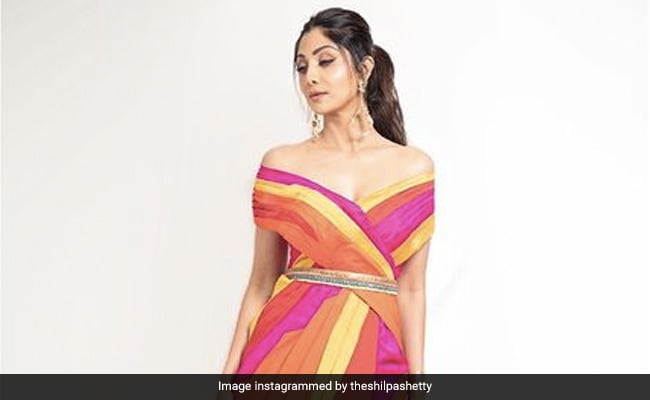 Shilpa Shetty rings in the weekend on a colourful note

Shilpa Shetty is a diva and there is no doubt about this. The actress, who seems to be defying age with her stunning looks and fitness, has never had a fashion misstep that we can recall. And carrying on the tradition of winning the fashion game, the actress was recently seen in a draped concept saree in bright summer colours. The off-shoulder outfit from Qbik has an asymmetrical design inspired by the traditional Indian garment and featured bright hues of yellow, orange and pink. Shilpa added some definition to the ensemble by pairing it with a simple thin belt. She kept her neck bare but added jewellery to add the perfect accents to complement her look. For makeup, she went for a dewy base and glossy lips. Shilpa kept her hair styled in a simple ponytail and we're already waiting for when we can recreate this look.

Also Read: Shilpa Shetty Is Her Own Ray Of Sunshine In A Shimmery Sharara Suit

The actress was sporting the look for the shoot of the reality show Super Dancer Chapter 4 on which she appears as a judge.

For the same show, she was previously seen in a lovely bright yellow sharara that proved that Shilpa could ace the ethnic look better than anyone else. The ensemble from Seema Gujral was the perfect marriage of colour and mirror work. The monochrome outfit that is priced at Rs 98,000 features a scalloped dupatta. Shilpa coupled the outfit with silver oxidised jewellery and juttis.

Also Read: Shilpa Shetty In A Sequin Saree Adds A Pinch Of Sparkle And A Lot Of Sheen

In another Indian look with a twist, Shilpa was seen in a one-shoulder Kaftan-esque kurta with matching palazzo pants. The tie-dye one-shoulder cape and gharara were in a deep shade of green with white designs. For this look, the actress decided to play up her makeup game by adding a metallic green eye-liner. She chose to go with a dewy base and glossy lips. The outfit featured a silver and gold border, which she complemented with matching earrings and a stack of bangles.

We also love how the actress has styled this green satin shirt and skirt. The shirt has an exaggerated cuff while the skirt features pleated as well as tie-up detailing. The actress seems to love her monochrome looks and she surely knows how to pull it off. She kept her hair open in loose waves and went with dewy makeup.

Tell us what you think of the actress' lovely looks.