Who knew denim could look this chic?

Sonam and Rhea Kapoor all dressed up (Image credit: sonamkapoor)

Sonam and Rhea Kapoor are currently holidaying in London, after the success of their recent film Veere di Wedding. From the looks of their social media posts, it seems like the sisters are having a fun time catching up with friends and family (cousin Arjun Kapoor was in the same city too for the shooting of his upcoming film Namastey England). Other than walking around the streets of London, indulging in lip-smacking food and celebrating Sonam's birthday, we are sure the sisters have been busy shopping and adding more envious pieces to their high fashion wardrobes.

In fact, a recent Instagram post shared by Sonam Kapoor is proof that even when it comes to holidaying, the sisters don't forget to bring their best fashion game forward. For a date night with the girls (sorry, Anand Ahuja), Sonam and Rhea got all dressed up, picking from the favourite fashion trends of the season - denim, pantsuit and statement handbags.

Date night with my girls.. posing with my og partner in crime.. @rheakapoor @anandahuja

Sonam Kapoor looked chic as ever in a denim pantsuit by luxury brand Tibi, which she teamed with a classic pair of black stilettos from Roger Vivier and a box-handbag by Dolce & Gabbana. Rhea Kapoor kept it casual by pairing her flared denim trousers with a black printed tee and denim jacket, and carried a sleek back Hermes handbag.

But it's not only for a date night when the Kapoor sisters look their stylish best. They know very well how to spruce up casual looks like a pro. While we thought it was only Sonam who had a thing for oversized shirts and statement sleeves, it looks like it's Rhea Kapoor's favourite too. In this Instagram post shared by Sonam, Rhea sports an oversized white shirt with exaggerated bell sleeves.

It don’t matter if you’re black or white

Their denim obsession of course had to include denim jackets too. 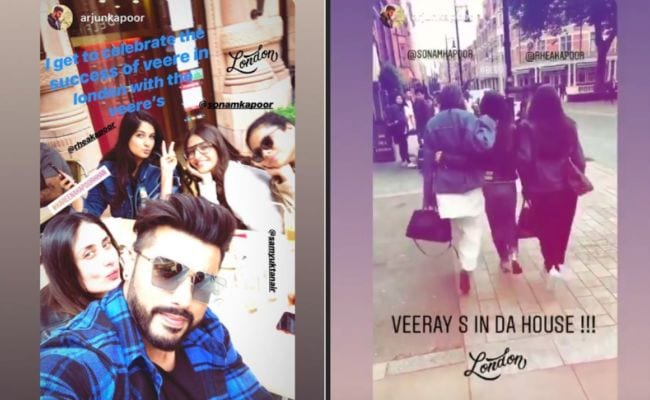 When Sonam and Rhea caught up with Kareena and cousin Arjun

In the days to come, we are sure to be seeing Sonam and Rhea Kapoor make some ultra trendy style statements after their London shopping spree. Let's wait and watch.