And no surprises there - it's gorgeous 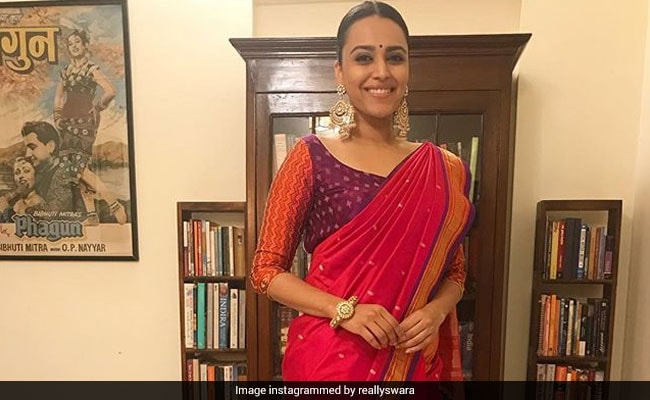 By now, we're well aware that Sonam Kapoor is Bollywood's reigning fashionista. With every appearance she makes and event she attends, Sonam makes sure to set the style bar a little higher each time. What we may not know is that, Ms. Kapoor keeps a tight circle of friends around her, whom she pampers to the hilt.

Case in point: Swara Bhasker's latest Instagram post. In it, the lovely actress wears a colour-blocked saree which she pairs with a sleek centre-parted bun, heavy dangling earrings and a tiny black bindi. In the caption, she thanks her fashionable friend Sonam Kapoor for the birthday gift of the beautiful traditional paithani saree. The orange and purple printed saree blouse looks resplendent under the bright pink pallu with gold buttis, which Swara wears to perfection.

Swara and Sonam first got acquainted with each other during the filming of Raanjhanaa in 2013. However, they really sealed their friendship after their second movie together, Prem Ratan Dhan Payo in 2015. This year, they are collaborating for the third time in the much-awaited Veere Di Wedding, a female buddy flick. Going by the looks of this duo's delightful friendship, we can't wait to see what's in store for us on-screen.

Swara has previously spoken about her friendship with Sonam Kapoor and how "getting to know her has been a surprise at every turn." Well, if those surprises involve birthday gifts with Sonam Kapoor's seal of approval, then we'd like to know how we can join this girl gang, right away.